I’ve had this problem before a couple years back but I can’t recall what fixed it.

I just added a 272 to the mix and when Kazoo opens it doesn’t see the bubble server on my QNAP, it sees Asset and Minim but not Bubble. Everything else works fine. Re-booted NAS and 272. Any ideas?

There’s loads of info on here if you use search.

Have you created your 272 as Openhome renderer?

I did some searching and saw where people had issues but didn’t find a remedy.

I did set it up as a Openhome renderer but couldn’t recall if that was necessary or not. It looks like Kazoo finally found the 272. Not sure what was going on there.

I need to figure out how to install the optware ng ffmpeg binaries on my QNAP so I can transcode.
Has anyone done this? This is getting above my paygrade.

I need to figure out how to install the optware ng ffmpeg binaries on my QNAP so I can transcode.
Has anyone done this? This is getting above my paygrade.

Just let Asset do that

Thanks, I’m already transcoding with asset and it works great.

I’d like to transcode the Tidal streams I play from Kazoo which means bubble server needs to do it I think.

You must use the 272 Openhome render otherwise you are just streaming from your control device.

I found that using a separate device e.g. laptop or Raspi gave the best SQ and there is likely to be no need to mess with ffmpeg.

QNAP updates may overwrite anything you do with installs or environment pathnames.

I hadn’t considered the QNAP updates may overwrite my changes. That’s a problem.

I don’t understand what you mean by using a separate device. Bubble server is installed on my QNAP and I use Kazoo from my Ipad to control/use Tidal which is integrated in the Kazoo app. Are you saying I use my Macbook like I use Kazoo? Thanks.

I mean to put Bubble server on another independent device. I used a Raspberry Pi, cheap and SQ was much, much better than when I used my QNAP NAS.

OK I didn’t realize I could do this. I don’t have a Raspberry Pi but can I install it on my macbook pro?

I think so. Is this different to you control device - Lumin?

I don’t know what Lumin is. I have Bubble installed on my QNAP and control it with the Kazoo app (Linn’s app) which is how I play Tidal.

If I have Bubble on my Mac would that mean the Kazoo App is no longer useful? It seems like it.

Got bored of trying to get Lumin/Bubble working for Qobuz to 272/Qb. Had to switch the NAS firewall off as couldn’t work out which ports/protocol would work so Lumin would find everything quickly and not after 5mins. I use mconnect instead and very happy. Much easier and no bubble server. Now use:

Only fly in the ointment is Sonos sees zen mini but won’t let me stream from it. Can’t decide if it’s zen, Sonos or Netgear Orbi issue.

Would be good to hear if any others stream from zen mini to Sonos - for convenience obv.

Does Tidal sound good through the Naim ap with Mconnect? Tidal through Kazoo/Bubble sounds great and it would sound better if I could transcode to wav but I haven’t been able to do that.

Sorry got mixed up with Lumin and Kazoo.

You are nearly there…a cheap RasPi would make a world of difference and save mucking about with the QNAP.

Mconnect for Qobuz streaming to 272 hires

This streams over WiFi from your control point device.

So I think the data comes in

I think it boils down to apple chipset vs Synology chipset handling data before the switch and 272 dac. Happy / interested to be corrected as maybe missing something but for convenience and responsiveness it still wins based on overhead so far

I’m not sure how mconnect can help me here. From the app store. Can install it on my NAS and control it from another app? 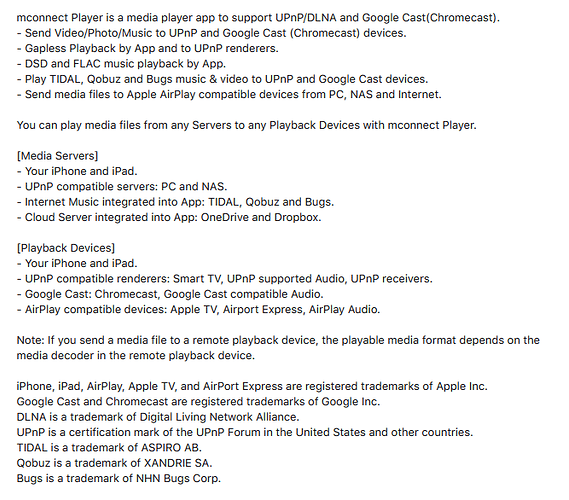 What do you use for a control point when you’re using the Raspberry Pi? I only need this to stream Tidal and not sure what I’d be using since Kazoo would not likely work.