Does anyone use these? Especially alongside Campagnolo disc brakes?

I’m waiting for a new bike (UK) and have just been contacted to say that the Shimano Di2 option I had asked for “is unlikely to arrive”. Not sure yet whether this means ever, or just that there will be major delays, possibly linked to the new 12 speed Di2 that has been introduced?

Anyway, I’d be interested to hear of any experience with the Compag set up - it might be an option to go with that instead.

Any views? Especially about ease of changing, do they stay set up without a lot of tinkering, are they reliable etc.

SRAM Red. Excellent performance and very convenient charging. I have it on all of my bikes and can thoroughly recommend it.

Much better than Di2, in my view, but never used EPS so I can’t comment on that.

I swapped from Campy mechanical to SRAM red etap a few years ago. For whatever reasons I had loads of problems with my bikes and Campy staying ‘tuned’. The wireless SRAM has been a revelation - it has worked faultlessly and I still have not had to replace the button batteries in the ergos. Each derailleur has a small clip in battery. The only problem I experienced was a flat battery - I simply let it run too long without recharging. Emergency fix is to swap the batteries round - inevitably it is the rear derailleur battery which will fail first. Alternatively, just carry a spare battery in your back pocket but I have never had to rely on this option.

If / when replacing my bike, SRAM will be the only option for me however, I appreciate that not everyone likes the look of the rear derailleur - it’s a bit clunky looking.

Thanks Andy/northpole - that’s interesting and worth a look. The bike builder felt that SRAM was a bit “flimsy” so wasn’t too keen but from what you say it sounds reliable.

Apparently the problem with Shimano is the new wireless system. Delivery dates stretch into May 2023 I’m told and the original non wireless system is short supply and unlikely to be available at all. Campagnolo suppliers will not even give an estimated delivery date so SRAM looks like it may be the way forward.

Double-check that EPS is compatible with your frame. For my Giant, the battery of the EPS is too big to fit internally.

Having waited for my frame for six months, I faced another 9-12 month wait for Shimano. Reluctantly I went with Sram wireless, which so far has worked flawlessly and no signs of wear (except the chain, which is expected) or flimsiness so far which was my complaint when I had the Force ten years back (I was a former Jedi).
Maybe try these centres for their feedback on Campagnolo reliability with EPS.

In the Bristol Road Club, we have 150 plus members; about five people use Campagnolo but only the mechanical version. Mind I’m the only person using Sram wireless everyone else is using Di2 who have gone electronic.

If you do go with Sram double-check the details as there are many variations of the groupset. Things to look out for; make sure it’s for double shifting (front and rear) as there is a single chain shifter option.
The disc brakes whether your bike accepts a direct mount or six-bolt disc brakes.

Thanks Andy/northpole - that’s interesting and worth a look. The bike builder felt that SRAM was a bit “flimsy” so wasn’t too keen but from what you say it sounds reliable.

When I opted for SRAM it felt like a leap of faith as I had no previous experience of the brand and associated it with mountain bikes.

I have been truly amazed at how problem free the SRAM groupset has proven and I really appreciate the wireless set up when packing the bike away for travel, something I’m hoping to do again in 2022!!

The bike component supply issues are very frustrating at the moment with some interesting prices being paid on fleabay for components!

Another SRAM AXS user here. The brakes aren’t as slick as Shimano - less modulation and prone to noise - and the shifting is a little more agricultural but this is nit-picking tbh. A replacement Force cassette was £170 though - significantly more than Ultegra.

Very useful, thanks all. I’m in a similar position as my frame is due in May this year having ordered it last July so I think a move to SRAM is on the cards. Having read a lot of reviews as well the AXS system has all the features and ratios I need so part from a bit of extra weight it looks a good bet - assuming that can be sourced in time now that everyone will be doing the same thing!

What frame are you getting?

This was an article on cycling tips released last week. But you will still have a supply issue problem I imagine and it’s only a rumour. 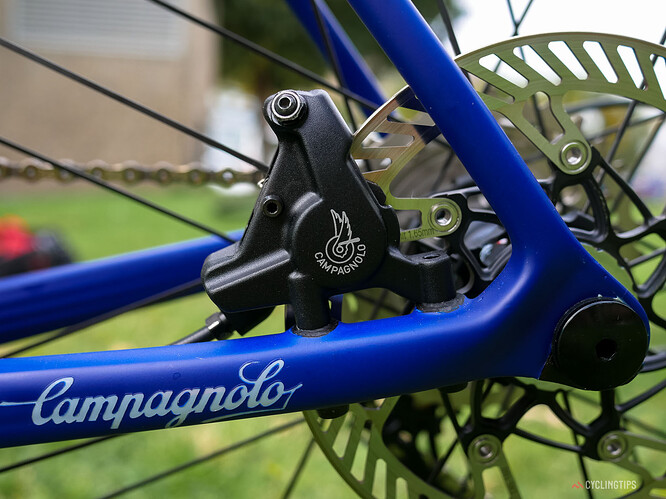 Are we about to see a new groupset from Campagnolo? - CyclingTips

As other brands offer wireless and catch up on 12-speed, what is Campagnolo up to?

If you are looking at new disc wheels I can recommend Winspace. Which came under the recommendation of Hambini who doesn’t mince his words. 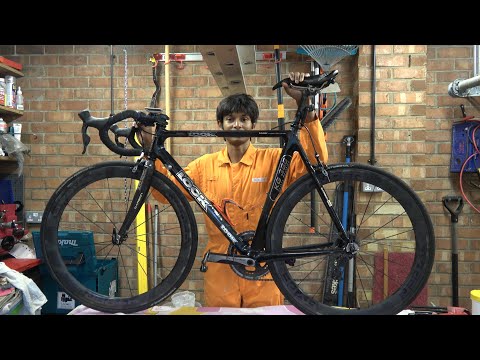 AXS is really flexible. As I’m getting older I appreciate the gearing more and more. I run a 48/33 and 33-10 on my S-Works, and the 33/33 comes in very handy! Just so practical. Tiny batteries, and carrying a spare is easy. 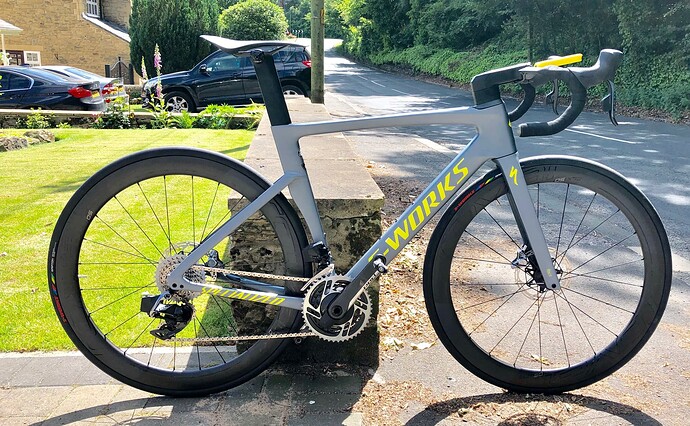 I like the gear ranges as well - not that I am after top road speeds more because of the hills around here and no longer being 21. The more I read about SRAM the more I think I should have ordered them before so if they can be sourced reasonably quickly that’s what I’ll go for.

The frame will be from Mercian, so neither Shimano nor SRAM are really in tune with the “retro” style they produce. Then again neither are disc brakes but the whole point is speccing a bike for me - and discs and electric gears are because I have problems with the joints at the base of my thumb which s a bit painful when I change/brake from the hoods, especially the front chainwheel where the size difference requires quite a bit of throw. So even if I can’t go electric I may well choose SRAM due to the max 13 tooth difference on the Chainwheels.

I’m a long term Campag user for over 40 years, it just works and keeps on working. I have not had the latest campag disc groupsets but tried them. Like everything now they all work fine or better.

currently got a mixture of campag 11/12 cable and eps super record 12 on rim brake bikes. really should sell a few off whilst supply demand is favourable I suppose.
Due to supply chain issues ended up with SRAM Red AXS12 disc on one bike last year, and now have another Gravel with force AXS12), really rate it. the 13 tooth gap between chainrings is so simple but just works.

I’ve had Mech and DI2 disc brake (& rim) but in 11 speed, all have been moved on to new homes.
Nothing wrong with any of the systems, but if I had a choice I would go SRAM/Campag.

Nothing to do with electric gearchange, but having just got a bike with Shimano’s 1x12 (10-51) gears it is wonderful, no longer having to fuss with changing two sets of gears - and inevitably ending with it wrong just when it is critical! I lose out on top gear compared to my road bike but similar bottom (range 3.2:1 to 0.63:1 compared to 4:1 to 0.65:1, both on 29” wheels) - but powering the bike to max while downhill is something I am content to sacrifice for the benefit of the simple change and so almost never in wrong gear.

That’s interesting - is that the Shimano GRX gears? They look pretty good and delivery estimates are better too.

Shimano XTR. Or more fully, apparently, XTR M9100 Shadow Plus group set. It’s an MTB, though used as a go-anywhere bike, with a fair bit of road use envisaged.

Nice gear range. I wouldn’t worry about a slightly lower top gear either and I do road all the time now.

I don’t have electronic gears, but ride with two friends on SRAM wireless groupsets. One had a problem with a rear derailleur draining batteries much too fast (think getting through two batteries on one ride). This was replaced and has worked fine since. My other SRAM friend has issues with one shifter battery having to be replaced - not on every ride, but it’s been a regular occurrence. I don’t mind at all as I get to have a rest while he fixes it. It also seems like you may not necessarily be able to get replacement parts for older SRAM groupsets, where you might still be able to get the equivalent age Shimano bits.

Yes, I think my concern would be day-to-day reliability, especially in the wet - a case of more to go wrong, where a mechanically (cable) operated derailleur only needs infrequent adjustment.

I suppose you can have gremlins with any group set!

My experience of SRAM wireless 11 speed has been free of any problems other than when I have pushed my luck on time between charging the rear derailleur battery. Bunter’s note above is a timely reminder for me - I don’t think I have yet replaced the ergo button batteries. I change gears a lot when riding and am amazed that they have not given up the ghost on me long ago!

I suspect longer term, for ultimate reliability, Shimano Ultegra or DA in mechanical guise would be hard to beat.