Can’t change Artist name on US

Because it was a rip I’ve managed to manually edit all the metadata for CD1 and the track names, album name and Genre for CD2. However for some unknown reason I can’t get the N-Serve Edit function to change the Artist name from the aforementioned composers to Deacon Blue. I do it and it comes up with this: 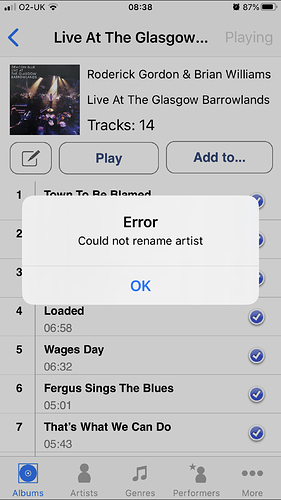 Anyone experienced similar and any ideas for a fix?

Have you got the latest firmware on the US? If not then updating it could mean that the US finds the right metadata when you rip again. The latest is 1.7c and it’s all about metadata because it deletes the defunct AMG database and adds Rovi. You have to get the update from Naim (or your dealer). They haven’t put it on their website, so they can keep track of who has it.

Failing that, you could copy the files for the errant disc to your downloads folder and delete the ripped copy. Then use a metadata editor to amend the metadata for the disc you moved. On playback through the app it will be in the right place in the album list.

I use an NS01 which uses the same OS as the UnitiServe. I find that there are some data fields that I cannot edit unless it’s been used before. One such field is artist name. It can, however, be edited in the desktop application.

Hi David: yes I downloaded 1.7c using the disc from Naim 6 months or so ago so its behaviour on this particular CD is most peculiar. I might try ripping it again to see if it was a one off aberration. Many thanks

The latest is 1.7c and it’s all about metadata because it deletes the defunct AMG database and adds Rovi. You have to get the update from Naim (or your dealer). They haven’t put it on their website, so they can keep track of who has it.

Have you tried editing the artist name via the DTC?

I notice you screenshot shows the album as playing. If that is the case, you won’t be able to edit the metadata whilst it is playing?

Yes that’s odd as well as it wasn’t playing.

Have you tried editing the artist name via the DTC?

No you mustn’t do that because it’s a US rip and you can break the indexing if you modify the metadata in the Music folders other than with a Naim app.

I must admit to having done that on a number of occasions and the indexing still seems fine. Besides, surely the DTC is a Naim application; it just resides on a PC rather than an iPad.

If the US is either playing the album, or even holding it in a paused play queue, that might stop you from editing it. Also, if you save as FLAC, it takes a while to complete the transcoding process, and if it’s not finished, that might prevent you from editing.

David, I think you mean using a third party metadata editor, not the DTC.

Definitely not playing or in a queue and it was ripped to WAV. I’ll try deleting and reinstalling the n-serve app to see if that helps.

Again, have you tried editing on the DTC?

Your screenshot shows the incorrectly named album as playing (as if it was local playback, not serving to a streamer) so even if the track isn’t actually playing, the US will likely behave as if it is.
I would try restarting the US to wipe the queue clean, as otherwise the controls only allow you to pause it.

Given that the post was created twelve hours ago, surely it would have finished playing. But I agree with your idea: restart the US then edit the Artist name on the (Naim) Desk Top Client. N-serve doesn’t appear to allow the user to add an artist name that hasn’t been stored before by ripping. The DTC works every time.

Yes that’s odd as well as it wasn’t playing.

I seem to recall, maybe, that even if it’s not playing, but it’s queued up, the data is locked and you can’t change it.

Just noticed that @ChrisSU pretty much said the same thing

Ok thanks. Will try that.

That’s one thing the Core does that the US doesn’t then, in that there is nothing to stop you editing a playing album. But the current album stops at the end of the current track after you have saved the edits, presumably because the file location has moved.

N-serve doesn’t appear to allow the user to add an artist name that hasn’t been stored before by ripping. The DTC works every time.

My memory of the US and n-serve is a bit dim, but I thought that you could add an artist manually to the list anytime, but you couldn’t use that artist name in editing unless it was already saved. So not before ripping but before editing, as it were?