Hi
I can’t play the latest Van Morrison album on my ATOM.
I use Tidal on Ipad or Samsung telephone. Of course via the Naim app.
When streaming directly (not using the Naim app) via Tidal on my Samsung phone, the album plays in the phones loudspeaker, and I can send the music via Bouetooth to ATOM
A strange thing - when I play a suggesteed song (1 song from the new album) there is no problem.
I have restartet my system, deleted and downloadad again the apps???

Since the album was released on Tidal this past Friday, it has not been playable for me other than songs 3, 10, and 14. Those ones were released as a preview a while ago. If you look at the album in the Tidal app you will see that the songs are greyed out except for those three. Must be a Tidal/record company snag.

Same here 3,10,14. Not condoning whatsoever but if its a stupid record company thing or the man himself, they deserve to loose if “obtained” elsewhere.

All tracks are now marked as ‘unavailable’ - Tidal via Roon. 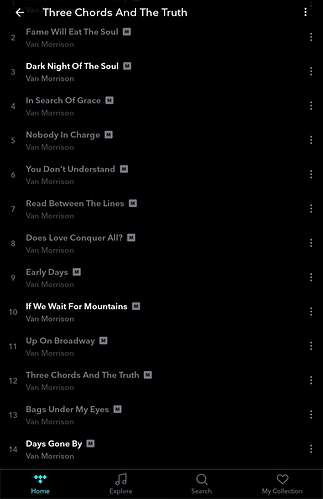 I can also play 3 tracks. Maybe the rest will be available after some days.
I hope so. The 3 numbers available are very nice, i think.

Same three tracks (only) here on Tidal. Same on Spotify. At least it gets us talking about it …