Anyone use a collar on their cat? Young Milo has gone through 3 so far and they tend to last about a week until he returns without it. Although chipped I’m anxious he wears a tag with a phone number in case he wanders off. The collars used so far have the safety quick release catch but they seem very weak and easily open with the slightest pull. With the onset of young birds in nests I’m also keen he wears a bell for a few months but I can’t keep replacing collars, tags and bells every week, anyone come across an alternative collar that he’s less likely to lose? He is a bit of a climber so also anxious he doesn’t snare himself.

We go through quite a few - it’s a balance between quick release in the event of an incident, and quick fall off!

We assume that there is a bush somewhere with about 30 of Louis collars in it. But we still have Louis - and that’s the main thing.

) - but they just don’t seem to be small enough yet. It’ll come I’m sure - but they remain quite bulky.

Yep, similar. One of my cats keeps hers for months until I replace it when a bit threadbare. My other typically keeps his for a week or two before he wanders in without it. I just order one of the brightly coloured and reflective multipacks from Amazon every few months!

It seems to vary on the cat. Our current cat is a large muscular tom, and collars just don’t stay on., no doubt helped by his rather large neck.
As far as flea killer etc, we use drops now behind the neck, rather than rely on the collar. However we do like the collar with a bell to give wild life a chance, but with Ollie it just doesn’t seem to work out. Luckily he tends to leave birds alone but he is quite a good mouser and ratter… and of course he is chipped.

Our current cat is a large muscular tom

…I’d fancy our lithe Bengal against him any day of the week. Name the venue. Let’s get it on!

Yes my last Ginger tom, another Louis and referred to as King Louis ‘cos he was boss of his patch, had a studded leather brown collar that lasted for years.

I think by the time he had it he was sufficiently advanced in status such that the other cats didn’t try and take it off him, which I believe is what happens to Jerry’s in the playground.

Thanks all, The collars I got are rated at 2.5kg but no way are they that, a slight tug and they’re open. If I can source a stronger quick release version it might do the trick, using a non quick release type seems a bad idea and if he dident come home some day I’d always be wondering did he get caught in a tree. I was more worried about him when he was venturing out first but he seems to have his bearings now but I’d much prefer if he had a mobile number on a tag.

but I’d much prefer if he had a mobile number on a tag.

Do you not use a little barrel? …really compact - with a scroll of paper in it. Here’s Louis modelling his… 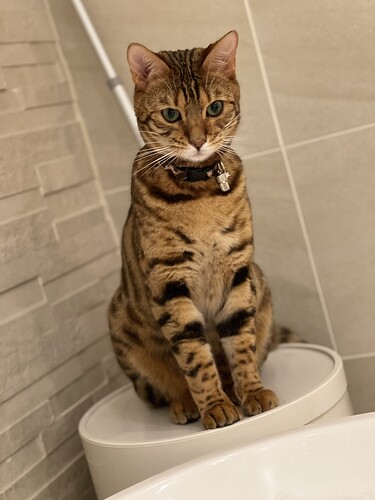 …we think there’s a touch of the gangster rapper about him with it on!

We didn’t want to rely on somebody taking him to the vet to read the chip! 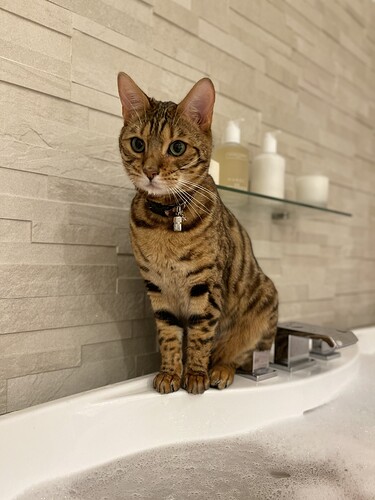 (He is obsessed with water - as most bengals are!)

He’s lovely, That could work well too but either way if he loses the collar he’s lost the barrel or the tag. Milo is fascinated by water too which I find strange for a cat

Yes - but the chance of him losing the collar in an incident, and then not being able to get home for you to put him a new one on are slim.

It’s a doomsday scenario I grant you - but there is always the chip in that case.

Louis has lost his collar so many times, come home without it, new collar, new barrel, off you go son…

I’ve had a cat since the age of 12 and even at that age didn’t want my cat wearing a collar. Would you like to wear one? They’re uncomfortable and cruel. No wonder the smart cookies find ways of removing them.

My cats have always been chipped and love their free necks.

I’ve had a cat since the age of 12 and even at that age didn’t want my cat wearing a collar. Would you like to wear one? They’re uncomfortable and cruel. No wonder the smart cookies find ways of removing them.

My cats have always been chipped and love their free necks.

In terms of managing my anxiety - I’m 100% in favour of collars and tags and chips!

To us - it’s Louis - he’s our child. To somebody else, he’s an £800 Bengal cat without any ID they can pick up and take home, because he’s lost right? …he mustn’t have an owner?

So yes - I’d LOVE to let him not have a collar on. It’s. A real pleasure to stroke his neck when we take it off for whatever reason. But I also value sleeping at night.

Do birds and other animals actually hear the bell and realise it is the sound of danger?

Do birds and other animals actually hear the bell and realise it is the sound of danger? 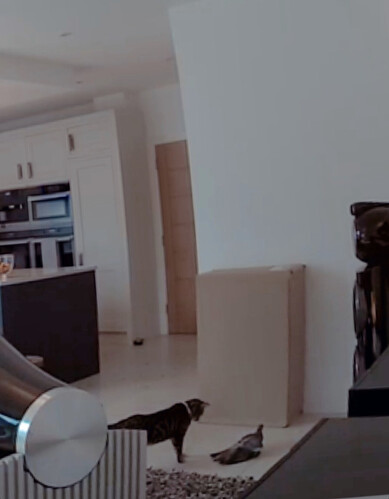 Not trying to sound like a smart-arse here, but since 1978, I’ve never lost a cat (except one for about 5 hours). They’ve always been allowed in the back garden (2 different houses) during the day and are always brought in before dusk. No cat flap. They’ve always been British shorthairs which look very exotic and nickable. My cats to me have always been my sons. My current Mo only tends to eat when I’m kneeling next to him kissing his cheeks whilst his head is in the bowl. My life probably literally does tend to revolve around them and there are usually ways of keeping them secure.

To be fair to Matt, I believe Bengals are prone to going feral.

To be fair to Matt, I believe Bengals are prone to going feral.

Yes - that’s exactly it - we have friends who have British Shorthairs like yourself @Count.d - LOVELY cats. Very homey - not wanderers at all - based on that very small sample.

Bengals like to wander - the are half asiatic wildcat after all! - and while bright, do get into scrapes. We’ve lost one on a road nearby - well - I say nearby, it’s about 75m away, and quite a complex journey, we had no idea he wandered that far.

There is a golf course out the back of us - so LONg Distance hunting available - and I’m sure he will have visited the 19th hole! …he was missing for 3 days a few months back - AWFUL - came back angry and smelling of bins. As you would be.

My wife also reads local Facebook too much - everyday there is a cat goes missing or reported stolen. Some come back - many don’t. I’ve asked her to stop telling me.

At the end of the day, a garden should be enough for a cat to have a interesting and safe life. There are fence tops that stop a cat getting out and dogs getting in. There are many ways to keep your cat within your plot. Depends if a compromise on garden aesthetics comes into your decision. A collar isn’t going to help a cat being stolen, hit by a car or lost if the person finding the cat doesn’t bother. I couldn’t sleep at night knowing my cat could leave the garden the next day.

If it was a human child, they wouldn’t be allowed out for hours on their own and no doubt there would be a way to keep them within the garden and dogs coming in the attack them.

P.S. We had 2 dogs find their way into our garden and rip our beautiful black rabbit to death, whilst she was innocently chewing the lawn and we had our BSH cat killed on the road 20 years ago. One learns the hard way and it hurts more than aesthetically ruined gardens or security effort.

I really don’t think you’re reckoning on Bengals - the fences are 7 feet high, locked gates. Just runs up them. Also uses the shed to bridge over the fence onto the neighbours tree and bridges that onto their shed.

I actually think keeping cats in the garden isn’t great for them - they need to feel a bit of freedom - especially bengals - it’s in their nature.

I’m sure we could do as it sounds you have and make efforts to keep the garden as a compound - I’m still not sure how successful we would be - but I think we’ve got the balance right for the type of cat we have.