Our latest cat is the first of our pets to discover the delights of spending the night on a warm SuperUniti. We discourage her as much it’s possible to discourage a cat, but is it this likely to do the SU any harm - should I think about switching it off at night?

should I think about switching it off at night?

The cat or the SU?

It won’t do it any harm (where “it” is cat or SU). I discourage it because of the risk of scratches on the front or top, but that does depend what the approach and depart path is and in terms of temperature build up if the SU isn’t actually playing at all, then it’s all fine.

(Putting a NAT05 XS on top of my office SU was an effective deterrent because it doesn’t get nearly as warm as the SU does).

I would be tempted to cover it up when not in use, as David described it would be scratches i would be worried about which would reduce its resale value.

I would be a little cautious here, as the case is the main heatsink for the unit, and overheating is possible with insufficient ventilation.

It’s fine Chris, although if I was having it playing loud music I might be more cautious.

Thanks all, it was the temperature build-up I was concerned about but I’d not considered the scratch problem. The cat lies inches from our wood stove so is pretty heat resistant.

I was thinking something large and loose like a box?

A large box would be a good idea - I can put ventilation holes in the sides and top. Cheaper than a NAT05 XS as well. It’s not much of a problem during the day as the cat leaps off pretty sharply if she hears us coming. She can’t disguise the guilty thud as she lands on the floor though.

I’m sure you could make something that works. I think it would be fine in many installations, but on a hot summer’s day with limited ventilation, it could overheat, especially if driven hard.

It might be worth checking the temperature after the cat has been sleeping there for a while. The SU does get very warm, particularly over the streaming board in the back left hand corner, if I remember that correctly. Could it be an option to shut the moggy out of that room at night and put a cosy bed elsewhere? Of course, having had many cats I realised they sleep where they want rather than where you want. We did have a cat once - Pussy - who was really clever and we trained her to sleep on a woolly blanket.

I’d only use it at night or, post-lockdown, if we were out for the day, so no music would be playing.

Good idea to check the temperature in the morning. We can’t keep the cat out of the room as she can access the cat flap from there - don’t want any accidents on top of the SU! She’s actually got many more comfortable places to sleep, including a deluxe cat bed, and she happily uses these during the day.

The SU is a particularly toasty Naim box. It may even be too warm for her as the evenings warm up, you never know.

As HH says, it’s the streaming board that can get hot, even when not playing, and this might be more of an issue than the power amp warming up in use. Probably not a big risk, as it will go into a standby mode automatically if it gets too hot.

As well as the potential for scratches I’d be bothered about it knocking the unit off its rack esp if it’s on a Fraim, as well as it disturbing any carefully applied cable dressing. That may or may not be an issue on an SU but it’s something to discourage. Cats weigh a few lbs, if something startles it and it leaps off the top of the hifi the laws of physics where every action has an equal and opposite reaction would leave me uneasy about it - cat goes one way, black box slips off in the other direction.

At some point I had an ND5XS and our late cate used to sleep on it. She always had a bit of an eye discharge (basically tears) that stained the top cover.

I eventually got the case top replaced by my dealer and bought an additional level of Isoblue to cover it.

Isoblue is pretty good for cat-proofing. 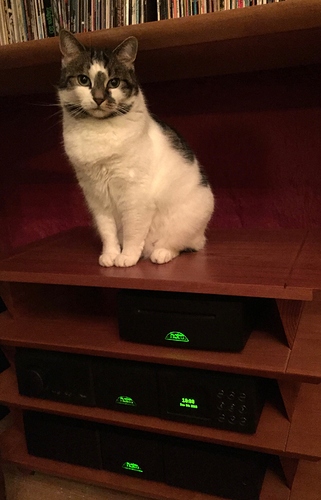 A sheet of tin foil will deter the cat. They hate the feel and the sound of it. They won’t forget it’s there for sure, then you remove it after a week.

Isoblue does look like a good solution which I’m sure our cat would appreciate - a lovely cat ChrisSU. The SU is on a pretty solid shelf unit, but I am a bit worried about the cabling at the back. In the short term would tin foil do any harm to the SU if I just used it at night?

If I didn’t live in Fife I might hold out some hope for warm Summer nights.