CD and the future

What is Naim’s short to medium term plans regarding the CD player. I have decided to make streaming my my source but considering I have hundreds of CD’s I still want that capability until I can get round to ripping them all to my Synology NAS (I also have a UnitiServe I bought recently but not got round to connecting up yet).

I am building my new system to be all Naim but I have a Linn Karik/Numerik. Linn, as you know, no longer make CD players and will not support or repair their own CD players anymore. I was thinking of selling the Linn’s before they finally give up the ghost and get a reasonably priced 2nd hand Naim CD player.

However, if Naim are going to same way regarding CD players I may end up in the same situation.

My proposed streaming options are NDX5/202/200DR with a second system based around V1/NAP100 or possibly Qute2/NAP100. The boxes I still need to buy from the above are the NDX5 and the 202. I have all the rest.

As long as supplies of replacement transports lasts Naim will continue to service/repair their CD players. This was a major reason for me buying another Naim CDP.

Having said this if I were the OP I’d crack on with ripping my CDs to a NAS and then if the Linn CDP dies I’d not bother replacing it.

If, or more likely when, my NAiM player dies I will be looking to replace it with a Hegel or a Bryston machine. Both are very musical and well built. The Bryston comes with a 20 years warranty.

The 20 year warranty does not include the mech.

Svetty, the reason I’m setting up a Naim system is because, apart from the reason I like the sound of it, I don’t intend to buy any Linn gear ever again. Sticking 2 fingers up to, and refusing to even look at or repair CD players, is a terrible indictment of what they think about their past customers.

Haim, I looked at those Hegel’s a while back. Simple unfussy lines and built like the proverbial BSH and sounding rather nice. It was through a Hegel integrated and some Dutch? speakers.

As a side track , you would hope with all the NAIM equipment that comes with DACs built in a CD transport would be a good addition to the NAIM classic range or put an optical output on their one and only stand alone player

That’s exactly what I would do. A few hundred CDs won’t take long to rip and it seems pointless to buy another CD player. In any event, you can play CDs on the UnitiServe via its spdif output.

Oh yeah. I forgot about that. I bought the UnitiServe last week but was away last weekend so it’s still sitting in the box. I took it out to have a quick look at it and that’s it. Intention is to plumb it into the network this weekend and have a play. Is it any good as a player though? I thought that was likely just more of a by-product of the ripper without any pretensions of being a particularly good source to the amplification stages over a dedicated CD player.

Not sure how old your Linn kit is and no offence to any CD5 owners, but a late Karik Numerik is in CDS2 and above territory. Plus the later versions are generally pretty reliable and the Hitachi laser mechs are still available. 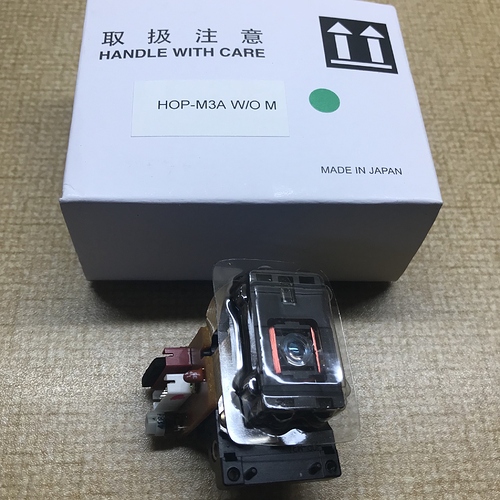 As a side track , you would hope with all the NAIM equipment that comes with DACs built in a CD transport would be a good addition to the NAIM classic range or put an optical output on their one and only stand alone player

I think I need to buy a couple of them as an insurance policy when inevitably the Karik optical unit decides it’s had enough. I suppose even if I do rip all my CD’s to FLAC then I’d still like the “IT independent” stand alone option of playing a CD now and again. In all probablility though, in the future, that’s about as likely as me playing my old vinyl stuff is now. Streaming is the future is it not. I’ll hang on to my Linn Kremlin for now for FM radio and for similar reasons.

Anyway, this morning I was weighing up which Naim CD player I needed to buy to replace the Linn. This afternoon I am not buying a Naim CD player. I’m done with Linn as far as buying anything off them anymore is concerned. I’ll keep the Linn Karik/Numerik going for as long as possible and when it becomes a lost cause I’ll dig out my Musical Fidelity A3.2 CD player or Arcam CD82 if I feel the desperate need to do so. Consequently I may now consider an NDX2 rather than the planned ND5, which probably makes more sense long term. Agreed?

We all go through a thought process , the NDX2 has made an awful lot of people happy

I’ll dig out my Musical Fidelity A3.2 CD player or Arcam CD82 if I feel the desperate need to do so. Consequently I may now consider an NDX2

I’m pretty sure they both have digital out, so you could also try them as transports to an NDX2.

I don’t see any point in using the Unitiserve as a CD player. It only works as such via its SPDIF out, which you may not otherwise be using. When you put a CD in it, you only have to wait 5 minutes for it to rip, then you can play it from the hard drive.

The early Karik uses the HOP-M3 and the later uses the HOP-M3A. Do some online research to find out which is applicable to your CDP. Also worth contacting a certain ‘Classy’ authorised Naim service agent if you’re in the UK as they also repair/service some older Linn kit.
As for streaming being the future … meh

It will need a HCDR as well though.