New member as of today. I’m gonna be getting the Atom soon. I just wanted to hear your thoughts on linking a Cd player up to it?
I’ve got quite a big collection of cds that I still wanna be able to play. I’m on Ebay currently looking at loads of older cd player models that are going for between £10 - £30 the kind that would have been £200- £400 10 or 15 years ago. If I link one of these up via optical out to one of the digital inputs on the Atom will that be ok or is there anything else that needs taking into account ?
I’m also thinking of linking up a turn table such as the Rega Planar 1.
Any thought or advice would be really helpful for this novice here!
Thank you

Nothing wrong with connecting a cd player via optical.
Dont forget that the Planar 1 will also require a suitable phono stage which you connect between the turntable and the Atom analogue in sockets.

Does it need an analogue to digital or digital to analogue one?
is there a phono stage you would suggest on a budget?
Thanks

You first need to make sure the CD player actually has digi out; not all do. But TBH if you want to play CDs the Atom deserves more than a basic CD player. A transport such as a Meridian 200 would probably serve it better.

Alternatively, if you’ve got a computer, you could rip CDs to a it and put a server on it. Or rip to usb drive and play that via Atom’s usb input. All these options are likely to give you better SQ than using a basic CD player. Though cheap by Naim standards, the Atom is capable of excellent sound but to achieve that you do need a source of commensurate quality.

thanks for this info Roger

whatt is this CD57mkII cant find it online?

That is old Marantz CD player. But Atom deserve something better, like Meridian 500 or simular transport.

Does the budget run to the Star built in CD player?

Haha I’ve well and truly blown my budget for now on the Naim Atom itself and the speakers. I’m pretty new to this hifi world, the cd playing aspect was something additional I wanted to add to it on the cheap - I was looking at getting an older model for a cd player from Ebay as I’ve seen some really inexpensive stuff on there that might be ok along the lines of something like this:

I bought this unit from Richer Sounds as "B grade" due to small scratches on the sides (see photos). Note that occasionally a CD will "flutter" in the drive, but this does not affect audio quality.

Caveat emptor with that one methinks.
Didn’t get good reviews at time and this one has a flutter whatever that is

There are a few Marantz CD63 CD (£250 when new) players on eBay around £50-70 this player when it came out in 1994 had “zilch” points against it on review (has digital output.). Generally accepted at the time that Marantz made good CD player at reasonable cost.

IMHO try one of the trial ripping software packages e.g. dbpoweramp. Rip a couple of you favourite cd’s and try them through the Atom or hang on til budget recovers and get a better CD player.

Welcome to the world of proper HiFi.
Watch out for upgradeitis
Let your ears decide

As said before you need a CDP with an optical or coaxial digital output. FYI many of the Naim players did not have a form of digital out (my CD5si doesn’t) + am certain you will not find any Naim player below a few hundred pounds - unless broken!

As for possible options for up to £100 max, you could find players such as Sony CDP-EX3/500 series (not all have digital outs) or similar players from other Japanese manufacturers -Yamaha/Kenwood/Pioneer/Denon etc. There are models from Marantz as mentioned above. Unfortunately the better Japanese players (over-engineered 90s Sony ES etc.) are well above that price. You might get a British Arcam - something like an Alpha 5, 7 or even an early Diva might be possible. Other than a broken draw cog - I now use a tab to open/close the draw, Naim style, my 25 year old Alpha 5 has been faultless and also sounds pretty good with its own DAC.

Another option could be to use a DVD player as a transport - not the cheap supermarket rubbish but something from the same Japanese brands mentioned above. My 2 year old daughter has just ‘discovered’ the CD draw on my Naim. It has been packed away and a trusty Sony RDR-HX525 DVD player has temporarily taken its place - no its not the same quality but it’s good enough using its own DAC.

Finally what about something like a Denon UD-M30 - one of many of the Denon Micros. A half with box that could look nice next to your Atom, has a Toslink digital out, a radio + stereo power amp and stereo preamp stages if you wanted to use it as a stand alone at a later date. We have one - a good unit and almost silent in operation. They seem to go from £50 + on the auction site. They can have an issue with the volume control on the unit but that is fixable or not a problem if you get the remote with it. If using it as a transport it is irrelevant anyway.

I hope this might give you a few ideas to consider.

Assuming you buy something as a temporary solution now, in the longer term, when budget allows, an upgrade could well be worth it. Both Cambridge Audio and Audiolab make dedicated, full-width CD transports for circa £400. Half-width options may visually match your Atom better. Of these, Project make a range of very interesting looking CD transports including toploaders from about £500+. Cyrus make transport-only shoe box models as well as CDPs and the Rega Apollo/Apollo-r can also be used as a transport only or as a standalone CDP. Exposure also now do a well-reviewed top loading CDP in the XM series and the Naim Unitiserve CD ripper come up used from about £600. These are all high quality units and should provide a very good digital feed into your Atom’s DAC.

Cambridge make a CD transport only, that means it will only work with a digital output . Ideal if you want to add a small TT and use the Atom’s analogue input . 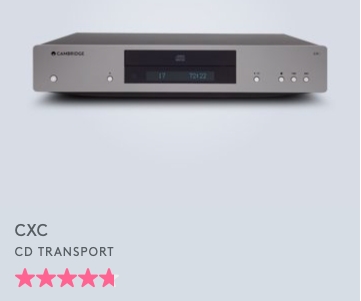 Richer Sounds are now selling this for 349.00 according to their website, with, I believe, a 6 months BNPL option. This product will have a guarantee.
Buying old but cheapish CD players could be a bit of a gamble. Caveat emptor as they say.

There are a lot of reductions from on-line sales at the moment. I saw the Marantz Turntable (actually a Clearaudio) reduced from £1400 to £1050 .