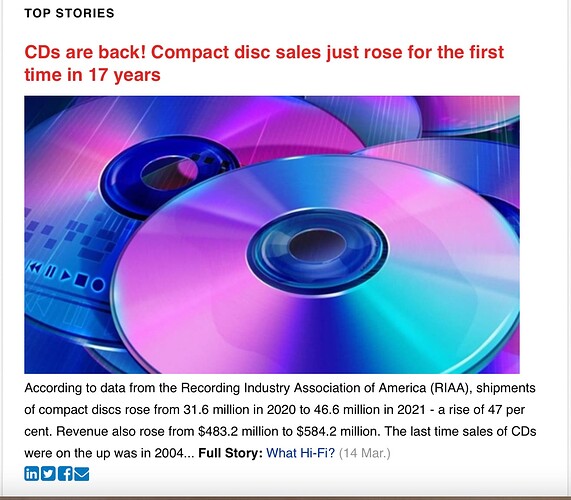 This just popped into my email from What Hifi , must admit that I have a Nova which I use for internet radio, and use the digital feed from my revamped CDX2 .

Have qualms about the payment for artists - but must admit that I didn’t see this coming.

Come on Naim , give us a CD transport

You could always use UnitiCore

That’s apparently in the US.

CD sales peaked in 2000, when nearly a billion discs were shipped in the US alone. 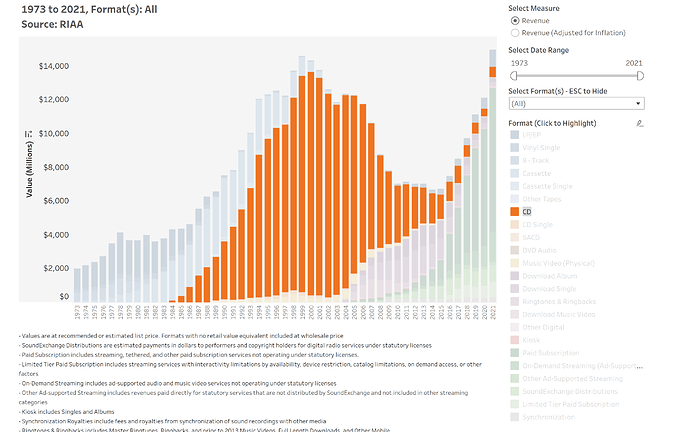 Though arguably this was enough for a new TT, it’s actually now a larger number of generated values (in particular compared to the historical maximum) and a much steeper recent increase:

Come on Naim , give us a CD transport

Plenty of top CD players and transports available from other manufacturers.
I am still committed to cd as a source but if I ever upgrade my player I will choose the best for my budget irrespective of who makes it.

True, but Naim didn’t release a new TT after one or two years of increased vinyl sales, but after a prolonged growth of the sector over 10 years, which seems to be stable and accelerating. That’s not the same as calling for a new CD player because of a single year-on-year rise in CD sales over the same 10 year period, and in particular a year that coincided with lockdowns.

In addition, I would guess that the overwhelming part of vinyl buyers are music and vinyl lovers. CD sales include my mom buying Paul Potts in the local grocery store because bored in the line.

In any case, CD as a delivery medium for digital data and CD players are not necessarily related. Arguably it makes more sense to sell CD rippers with storage even to the demographic that’s buying CDs.

I’ve bought more CDs since I sold my Naim CD player several years ago than I ever did when I owned a CD player just rip them into my Core job done.

Agree just rip them into the Core. Easiest to manage, easy to use and best sounding way to listen to your cds. I listen to more of my cds than ever since I got the Core and you know what…with a good DAC or steamer upstream they sound almost hirez.

I should have used the charts with revenue adjusted for inflation: 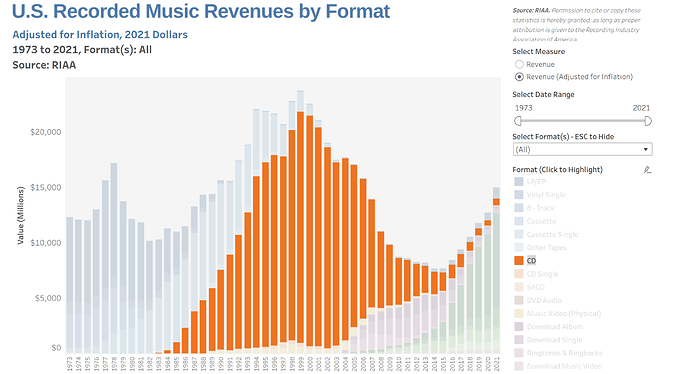 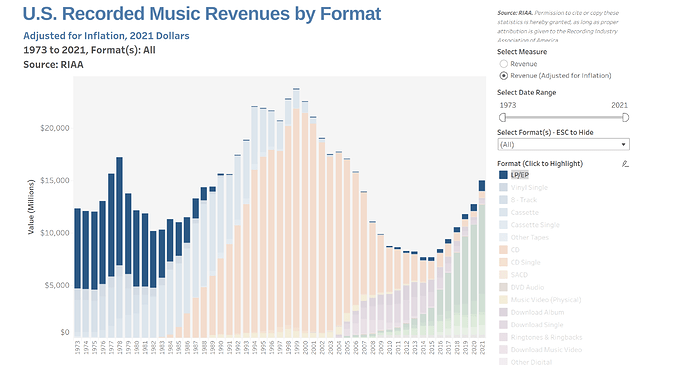 CD sales include my mom buying Paul Potts in the local grocery store because bored in the line.

That’s getting tricky in the UK - most of the supermarkets haven’t stocked CDs for a year or more.

As a member of the CD Faithful, I’m disappointed by this. I was hoping CD prices would stay at can’t give them away levels whilst everyone else splurged their cash on vinyl.

I think I am still seeing this kind of CD around here in Germany in drugstore chains and supermarkets. Not sure if the huge bargain bins in the large electronics stores still exist, haven’t been in such a thing for ages

I have purchased more CDs in the last 3 years than I have in my life. CDs are a keeper for me.

Same here and I don’t own a CD player?

Your graph appears to show reduced CD sales in 2020, almost certainly due to Covid keeping people out of shops. The recovery from that anomalous low doesn’t detract from the very obvious signs of a consistent year-on-year decline that’s been going on for years. Using it in a headline that claims increased sales is pure BS.

True, and vinyl seems to have continued its steady growth despite all that

Of course we shouldn’t forget why vinyl lost it’s popularity. Storage space, inconsistent quality, easily damaged, only about 20 minutes of uninterrupted music and cost.
I love vinyl and have decent library but I was delighted when cd arrived and even more so with the arrival of streaming.
Good argument for embracing all 3 formats though.

Very good news about cd sales, albeit the actual availability seems scarcer by the year (same situation for vinyl btw).
A new Naim player or transport would be very welcome for me. Now i’m using cd players with the same care of a classic car. UnitiCore not an option for me, i really hate mechs with loading slot.

Or just put an optical output on the existing CD player

Vinyl never lost its popularity with me. Nor CD and although I stream via Qobuz and playback high res music from my Naim Core I still prefer physical media. I am undergoing a massive project at present moving out whilst sorting through my 2500 CD collection. Its shelving is being replaced and upgraded and whilst doing this it made me reacquaint with my collection. The CDs are in 20 large boxes in my log cabin and now nestle up against the vinyl for a while. Regarding the playback of CDs I notice that several companies have invested in the manufacture of new CD mechanisms including CH Precision of Switzerland and at the other end of the price spectrum I see Project’s new CD transport has a mechanism that was recently manufactured by StreamUnlimited CD - their mechanism CD–Pro 8. Also Denaprips has really interesting CD transports featuring upsampling to DSD. So there seems to be life in the old CD yet… 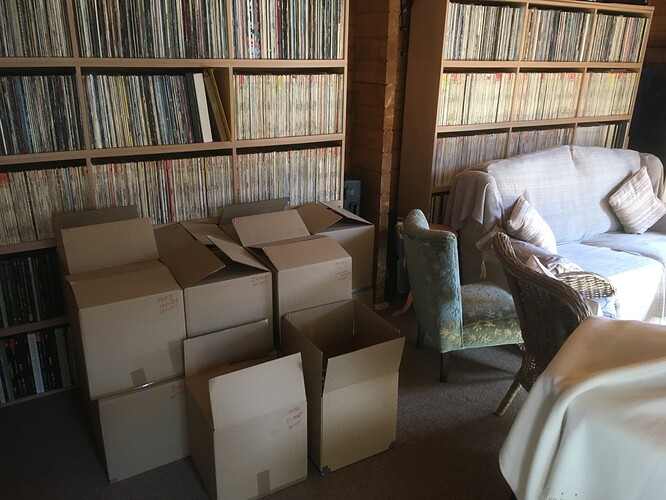 Thanks @melomane100
Yes I’m still committed to both vinyl and cd even though I have 2 streaming subscriptions (qobuz and Apple).
Indeed after many years collecting, storage is a problem.
My low percentage of actual listening to vinyl is because of a laziness that has crept into my cd listening also.
Impressed by your collection btw