Just acquired second user cd5 and it is very temperamental in which cd it likes. Some cd’s cause it to clunk and show two dashes in display and won’t play whereas others it is quiet, reads it, displays track total and plays fine. Anybody any notion why this might be?
As an update, I’ve just discovered after using another puck from my original cd5i player currently being repaired, it works fine. This puck has a stronger magnetic pull and all cd’s seem to play ok so far.
Is the puck that critical or can they be faulty?

Just read it…thats lucky, cheap solution. Puck is critical due to the naim tray setup. Other players have a clamp that decends onto the disc I think, the naim way is sonically superior.

You need to use the right puck as if you use the one with the stronger magnet it can cause damage. Never pull the puck directly upwards, but lift one side first. If the puck has little rubber rings you can rotate them and give them a squeeze with tweezers to make them rounder. If that doesn’t work you can order a replacement.

Definitely try either a new clamp, or else take a look at the existing one. You may see that the rubber loops look a big squashed. You need to gently tease them round so they are nice and rounded. If all then works well, ultimately you should buy a new replacement clamp. Note though that the drive and clamp arrangement was designed for Red Book standard discs. Some late CD were pressed outside of Red Book standard - too thin in the centre - and can cause disc slippage issues. For these you might want to try the later Clamp 5 as used on the CD5i/5x etc… but be careful as it has a very strong magnet and can pull on the hub of the early CDM9, VAM1205 and 1250 players.

You need to use the right puck as if you use the one with the stronger magnet it can cause damage.

Respectfully, I’m not sure this is true. The puck with the rubber grommets is a right pain in the ass and I constantly had to fiddle with it to avoid the dreaded “thunk” and “two dashes of doom”. I replaced it with the newer Clamp 5 – sans grommets – and have never had any further problems with my CD5.

Totally agree with Richard - my CD5 had the same issue, 10 minutes with some tweezers rotating the rubber rings by 180 degrees gave me faultless listening for the next couple of years until it was upgraded. It was also the first procedure I carried out on my current preloved CDS3 and not had a single mis-read yet…

I’ve got an unmodified CDX2 which has the weaker puck and I find that a small number of discs just make a very unpleasant scraping noise before the ‘two dashes of doom’ (perfect description, by the way). My dealer suggested a dirt-cheap solution which has never failed:

The problem is caused by the disc centre being too thin, so just take four thin strips of masking tape (about 2-3mm wide and about 15mm long) and stick them around the centre hole.

Far cheaper even than a new puck. Makes the disc look a bit shabby, but you can’t see it once it’s playing!

Interesting solution but I couldn’t do that to dozens of cd’s which give the problem. I listen to so many of them. Surely we don’t pay such a high price for Naim to use sticky tape?

Yeah I’m happier now I’m using the other puck but will check with Naim tomorrow and maybe buy another.

Thanks i have tried it but with no luck yet. Will give it another go. Thanks.

You have just described a scenario many of us are familiar with , it is almost certainly the puck and will work well if you squeeze the rubber bits on the bottom. (Ooh Matron)

But a new puck will work better. I get mine on line from TomTom Audio

We always had a spare puck to hand. Squashed rubber may be the least of your problems with a removable puck. As has been said above, always ensure you have the correct spare for your CDP. The CD5 only ever used the rubber containing puck.

Great. Thanks for that, just ordered one.

I had the same problem on my CD5, the tiniest amount of blue tac and it’s never missed a beat since.

Interesting but where did you place the blutac exactly?

Where the CD hole sits in the tray, basically where the puck sits

Sorry to be stupid but when the cd is in you can see the blue tac in the middle on the silver centre? 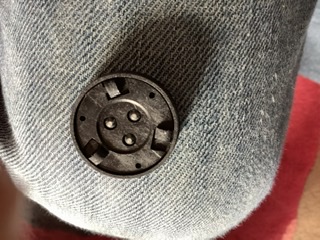 In which case don’t the three metal studs on the puck get no contact?