ok so I got rid of the CDX2 XS power cable and fired the XPS2 power supply from a free socket in the hall and → the fuse blow off. WTF ? So as logic I thought: well the CD Player was already turned on, so I verified the Off position on my Tuner Nat 05 XS and put the switch in the same position. Fuse back in and now it works. So talking about logic: OFF position on the CDX2 Xs is the opposite of OFF position of the Tuner Nat 05 XS. So I suppose the first time CDX2 XS was in off position and the XPS powered on had current supposed to go through the CDX2 , but this mother f…er was turned off and so the fuse blew out. Too complicated for my simplifistic logic, I have to agree. So now CDX2 XS after 5 min playing some amazing Tesla “Psychotic supper” through my Cambridge audio A500 through B&W DM 100i and it sounds really good. Waiting for an answer of Sudgen if I could pass my Sudgen HA-4 headphone preamp to my A500 integrated amplifier and then connecting CDX2 XS directly to the Sudgen. It already sounded good when Sudgen was connected to Focal XS Book small desktop active speakers. All is fine now except the Ikea cable extension going to the main power socket in my hall

No problem, thx for your explanation afterwards !

@anon4489532 it’s worth for more than a fortnight: Moselle river, fortification of the old town, north with the views, the castles, I love it here

Ps: CDX2 XS with XPS2 playing like a champion, so no harm at all. Problem is so solved but I will switch off tonight as cables lying in the hall ant danger to fall over it ! Have to find another solution. Actually 25 separate items are in sockets in my living-room, lil’ too much

The fuse rating is marginal in the XPS2 and it occasionally blows upon being turned on, depending on luck, i.e. the magnitude of the inrush current which varies depending on the precise point in the AC cycle at which you happen to turn it on. Turning if on soon after turning it off also contributes. Have spares available, available from your dealer. (The next higher available fuse rating would have been too high for the XPS2, so Naim chose to go with this).

From the fuse FAQ:

The inrush current *** will depend on the transformer characteristics and the point on the power curve at which connection is made to the AC source. If the transformer core retains any residual magnetism the inrush may well be even more severe.

That said, it happened only once to me and this was when the power cable was not fully inserted and I happened to touch the power cable when messing around with cable dressing. The plug moved in the socket, it arced and blew.

If it blows repeatedly, it indicates a fault in the unit.

The fuse blowing off is part of the Naim “Sound first” philosophy. One has to deal with it if you want to stay with the brand

Hello again. If you mean the big black plastic thing which was on my CDX2 when I bought it, I have to admit that I thought it was just a protection like a dust cover and not for connection. I think I need a picture of this link plug, if you do not mean the big black thing which originally was on the Burndy socket. For the rest yes, of course I read your first helping comment, but 1. I forgot and 2. I was angry about the manual and not at you. To vbe honest my Tinnitus (march 2020) I got from the Lotus alarm was because the battery disconnect switch got removed by me thinking it was a screw without importance! But professional car assistance also did not find the problem and so my Lotus got town away, complete disaster and Tinnitus remains, pandemy or lack of concentration or just stupidity and too stupid for UK brands like Naim and Lotus. Whatever, it’s too late to change, I keep it all. Stay safe and best greetings.

Fuse is just a plastic switch and easy to push back up. I prefer that fuse switches off in the apartment that there is internal damage in the XPS2 or even the CDX2

Continueing with Dire Straits later, which sounded harsh with the Rotel RDV-995 DVD player with an apparently ok Cd playing sound quality. Well I did not like the hi hats with Dire Straits Communiqué and Love over Gold yesterday. I suppose the music will open up soon

Sorry that you are having such a hard time with all this. Did you buy the player and power supply new or second hand from a dealer? They should have helped with this setup if so.
I hope you can get it sorted so that you can enjoy listening to your music
MfG
Mark

Fuse is just a plastic switch and easy to push back up.

Oh, I misunderstood, I thought that you were talking about the fuse in the unit, next to the power socket.

Yes, the fuse in the fuse box of the apartment/house can also blow, for the same reason. In Germany at least, fast-blowing fuses in the fuse box are standard. (It’s possible and allowed, if done by a certified electrician, to replace them with slow-blowing ones if it happens too often. But usually not necessary and as you say easy to switch back on)

Hello again. If you mean the big black plastic thing which was on my CDX2 when I bought it, I have to admit that I thought it was just a protection like a dust cover and not for connection. I think I need a picture of this link plug, if you do not mean the big black thing which originally was on the Burndy socket.

Yes the one on the burndy socket. You remove it then plug in the burndy. Looks like this: 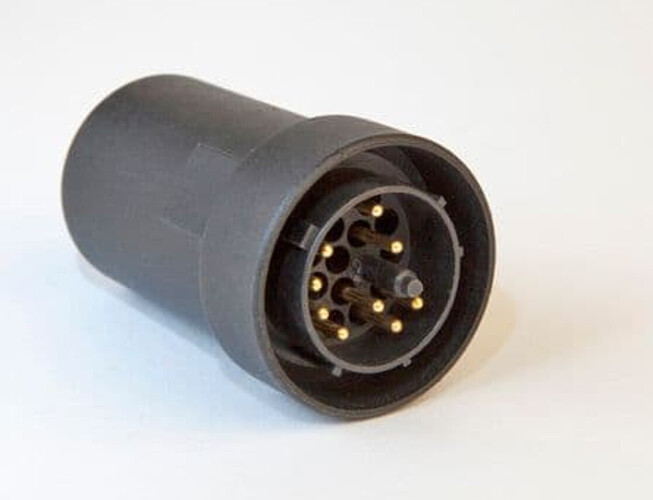 Hello.
Let’s say I was lucky. 10 years ago I bought all gear as “exposition” but they were all brand new. I got 20 % off or more on all Naim gear, bought CDX2 + XPS 1 or 2 years later, same deal. 4 years ago, this shop 250 km away (I was there 3 times, 1st to hear, 2nd and 3rd to collect it personally ) the shop was ruined and then it came out that they often sold brand new in box gear as exposition or B quality items

And now after so many years and lack of sleep because of Tinnitus and getting older, I’m no more in the subject and too stupid for Naim Audio I guess. On youtube I call myself the vintage hifi ambassador

I have that in the plastic bag but I do not understand the logic why I should check that when it is taken out, and the Burndy cable connected to XPS2, I should know to remove power cable from CDX2. I thought of it like it was a Chinch cable to transfer sound, and not energy, well I suppose that was my reflection.

Music has just begun. Ok Dire Straits hihat is very present and they use so many synthesizers and their music is not so natural sounding, but the Hihat is not harsh as yesterday with the Rotel RDV-995. It sounds just lovely.

I have that in the plastic bag but I do not understand the logic why I should check that when it is taken out, and the Burndy cable connected to XPS2, I should know to remove power cable from CDX2.

I agree that the various options are confusing and require close reading of the manual, and sometimes it can be difficult to see all the important things in the manuals, but the two parts that were highlighted by HH in his screenshot further up do make it rather clear - if both are read. In the first one it says literally “When used with an external power supply the CDX2 player must be disconnected from the mains”. In the second it says “… remove the CDX2 mains cable”. And the picture that is nearby shows how to connect the burndy, a mains cable on the XPS, and no mains cable on the CDX2 player. There’s not much more that can be done. 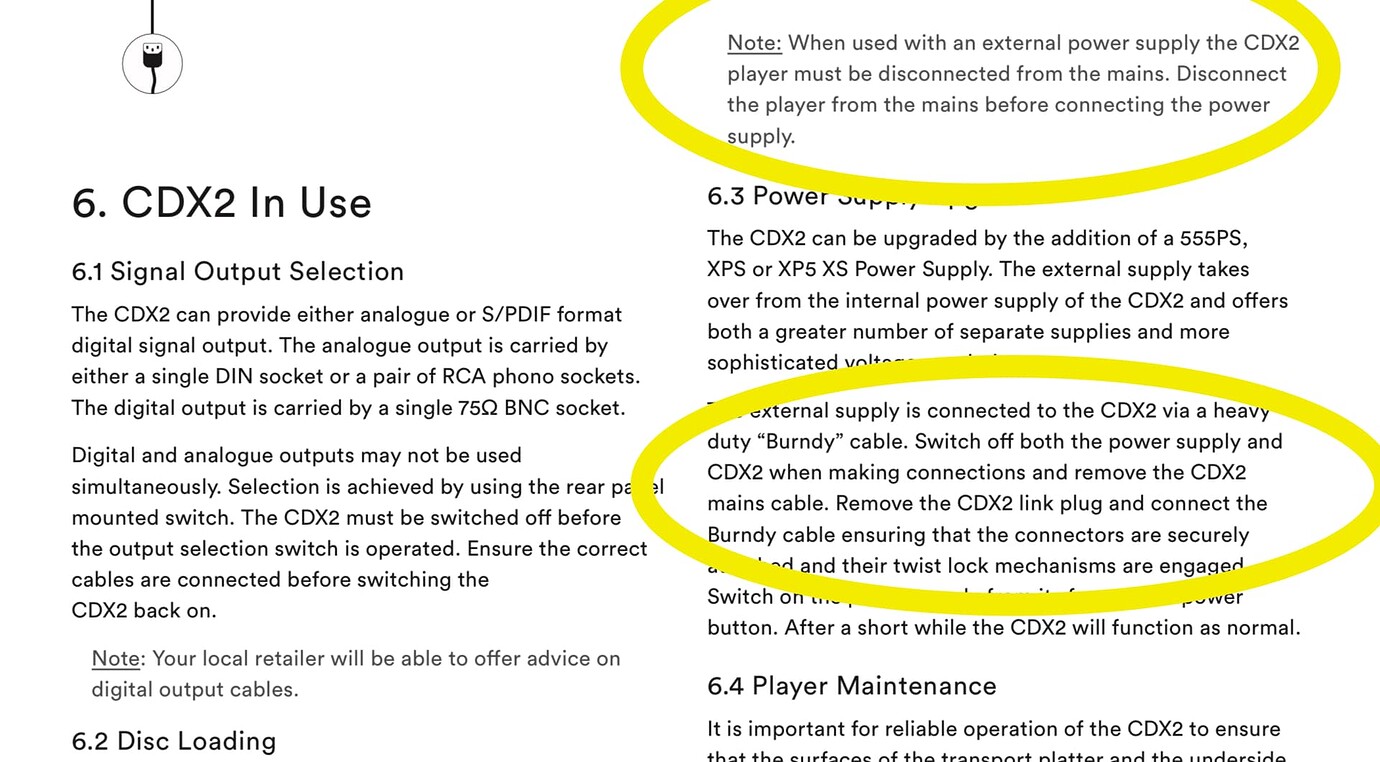 ok so if I would have tried to hook up the CDX2 a) with XPS 2 turned off but Burndy connected both sides or b) with Burndy removed from CDX2 without putting back the link plug, and connect it to a CD in from an integrated amplifier, the result would have been …no music at all and I would perhaps be too dumb to look for the black plastic plug in the plastic bag in a drawer! Well thanks for not having to have lived that very special negative moment!

I have to agree that I misunderstood the importance of “removing” and put it on a nearly “same equal degree or level” as the word “disconnecting”. Mea maxima culpa, non equus est! Hodie non est maximus bonus dies (seems that today is not my best day).

Everyone has made mistakes, I guess. Glad that apparently it did not break anything

Yes, but now I would like to have the explanation how important the danger of damage is when powering both and how exactly the current circulates depending if Burndy attached but XPS not turned on, and especially when both mains turned on. Would like to understand the electrotechnical reason. Will write a e-mail to the german distributor very soon. I can be honest as there is no warranty left on any of my Naim gear. I just verified if the band at the Burndy cable is at the beginning of the signal, so at the source (CDX2) , it is!

I just verified if the band at the Burndy cable is at the beginning of the signal, so at the source (CDX2) , it is!

In some units, for example the NAC N272, the unit objects to you powering the internal power supply as well as the connected XPS and you get a warning message on the product screen. But this seems not to be an issue with the CDX2. It’s just wasteful of power to have mains to both power supplies when the internal one is disconnected.

Dear Davidhendon: that really means a lot to me. I suppose Naim wants as many current out of the CDX2.2. I was shocked, doubtful, listened closely to problems from the CDX2 and then came a Tesla CD which had strange noise from the recording and Diana Krall where de CD was scratched. 2x Dire Straits playing perfectly, but NOW I am really happy to hear that except power wasting, nothing got harmed. Stay safe dear Mr Davidhendon. Ps: What will happen if I turn off the power switch (burndy attached and XPS2 switched on and in working mode) at the back left of the CDX2.2 ? Normally nothing at all as all electricity comes from the XPS. Not sure of my logic though. In your words: “Unpowering the CDX2.2 should do nothing at all” ?!