CDX2 taking the best out of it with Non Naim

Hello.
So I have to rewrite my deleted text as it disappeared but now shorter.

CDX2.2 + XPS2 with ROCK music sounds unbalanced as my CDM1 with bass pads taken out: too much bass and HI-HATS sounding thin without body, too filigrane, I don’t like this sound of a drumset.

Idea 2: Connecting Naim N Dac to my CDX2 and XPS2 to the NDac.

Ansuz X2 BNC-BNC any good with Naim?
Wireworld Eclipse 7 RCA connection better than Chord DIN-RCA
Naim CDS3 so much better?
555 PS making it worse if I already do not like the XPS2 sound

Itr can’t be that I only like my CDX2.3/XPS2 playing Diana Krall or jazz !?

Speaker cables: now listening with Audioquest Rocket 33, can be changed to Naim Naca 05. CDX2 not to bright, but too thin. Perhaps it only sounds really amazing with Naim gear or Hiline could add some body. Only piano sounds better than with any other transport connected to the Sudgen Dac-4. Violines on the CDX2 don’t sound refined enough and as I said body weight is missing. Cheers.

I remember the CDX2 was rather critical of what it sat on, didn’t like a lot of steel in the rack but loved a full Fraim shelf to the point where I’d prioritise that over a 555ps for a CDX2. In fact I bought one just for the CDX2 hen I moved it into a second system on Friam Lite. Now I’d presume Fraim isn’t on the agenda but don’t just plonk the CDX2 down on any old surface and expect to hear what it can do. What are your options for supporting this system?

Hello. In my last apartment I had it on an orange 10 eur Ikea table. Then I made the thread: CDX2 sounds harsh … and realized that with my horns Heavy Metal and Rock music was impossible to listen to, unbearable.

So 12 years later in my bedroom: Way way better but now I understand in calm with 65 dB and not 80 dB as I did as my neighbours around me were always away or very very old the sound which so many people hate.

Now babys in the house and I can’t stand road noise, so built my paradise in my bedroom which sounds really good witl all my equipment with all kind of music.

Even Pearl Jam now works with CDX2 with No Naim gear and without horns.

But I want the hihats less precise with more body and I do not like the violines and flutes. Piano sounds great.

You see it here on a Ikea shelf on wheels and a Bamboo Ikea butcher thing under it.

No Naim fraim possible as I have to change a lot until I find the 5 pieces which will stay in the bedroom.

I suppose the surface the CDX2.2 stands on is better than it ever was. Tomorrow the CDX2 will be connected to the Sudgen A21 SE Signature. Kind regards. YT: The vintage hifi ambassador 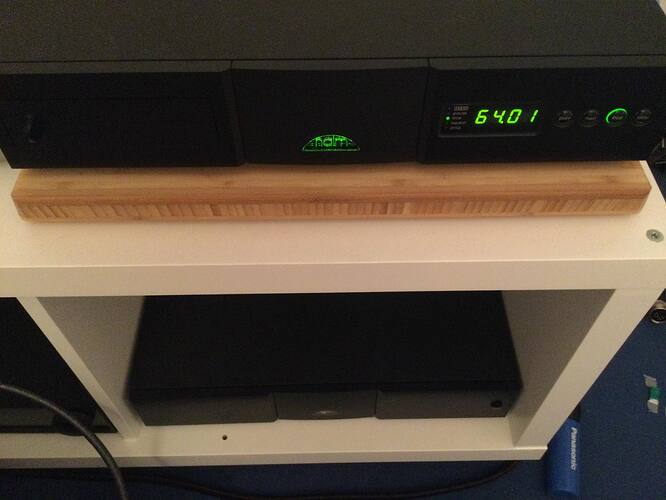 I’d say that’s a reasonable compromise for the support.
Brightness is emphasis somewhere around 5kHz, much lower than you might expect, my old Thiels were very prone to it and had an impedance dip there. An odd thing was that I could tame it to a large extent, once the steel rack was gone, by making sure the CDX2’s power cable didn’t touch the wooden rack that replaced it, though that came as something of a surprise. When it was still there after changing to Fraim Lite I’d assumed I was stuck with it.

How does what the cdx2 sit in effect the data stream it takes from a certain or the music signal it’s dac converts the cd data to? I’ve had a cdx2 since 2006, used it mostly with its own ps and sat it on various surfaces- I can’t say I have ever heard any difference in its sound quality regardless of how it has been sited… hmmm…

I don’t need the whys and hows to hear something, they come later or not at all, and where I heard it most was in an unnatural ringing of high piano notes. I was listening to quite a lot of Scriabin around that time but Chopin and Liszt suffered just as much. The CD5x the CDX2 replaced didn’t have this issue, nor did my vinyl source or tuner.

well it’s so sad having to affirm that I’m enjoying a Mitsubishi M-C5100 motl transport (similar inside than Akai CD 52) and connected to the Sudgen Dac-4, I really like the sound. So now considering the Top of the line Akai CD as a transport

A Denon DCD 3520 will be here too in some weeks. And besides I’ll experiment with the CDX2. Cheers.

Update: Preamplifier Exposure 3010 s2d replaced by Sudgen HA-4 (next will be Sudgen A21 SE Signature) and the sound has changed. More body, less details. More musical.

…and I replaced the Chord Cobra Din-Rca by a wireworld Eclipse 7 RCA. Will revert to Chord later. Interlink Pre-Power is a green Chord Cobra VEE3plus.