I have never got the Grateful Dead. Is there an album someone can recommend to make me change my mind?

Morning Dew from their 1967 self titled debut album. There’s also a great live version on their Europe ‘72 live album…

They are marmite but will depend what your tastes are:

If the latter is ecstatic improv you are on the way to becoming a dead head. If it’s tedious country tinged nurdling look no further. 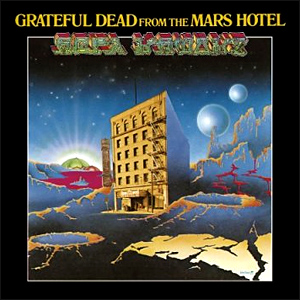 “From the Mars Hotel” is probably one of my favourites of their albums.

I’m especially fond of the track “Scarlet Begonias”. There is an even better version of the track on one of their “Live” albums, but I cant remember which one. They do have rather a lot.

The Dead can initially be a wee bit hard to get, I would suggest either American Beauty or Workingman"s Dead as being an excellent start. If you prefer a more improvised/jamming approach to your music their live albums are the ones to check out, there are loads, recommend, Live Dead, Live in Europe and Skulls and Roses.

While you wait for enlightenment, you might get a kick out of [folk sprinkled jazz á la quirk] Jerry Garcia and David Grisman on their joint albums “Not For Kids Only” and “Jerry Garcia/David Grisman”. Positively giddy, they are/were, and insanely tight.

As others have said, “Europe '72” is the place to start IMO. I think to really get the Dead, you need to hear them live, and hear how they work through and blend song and melody. And that record, in particular, has everything. That version of “Morning Dew” is really something.

But as for Dark Star from Live Dead - just not my thing at all. Good to try new stuff though and I will definitely listen again to albums mentioned above. Thanks for everyone’s help

Bravo Crispy very glad you’ve found a way in. Not sure I’d be prepared to do something similar!

That version of Dark Star in particular (there are 100s across the many many live albums) always gets me.

I think the live 1970 double album just called Grateful Dead (also known as “Skullf*ck” or “Skull and Roses” is one of the more approachable for beginners although my favourite is still probably Anthem of the Sun. You could also try the acoustic double “Reckoning” and the 1981 live double “Dead Set” - along with every other note they have ever played…

I seem to recall there was an album released a few years back that consisted entirely of different samples of live versions of Dark Star? (Not that I am about to get it, having failed my Deadhead entrance exam)

I think you may be referring to “Grayfolded” by John Oswald, released a few years ago. Really great, trippy stuff, editing together dozens of different performances of “Dark Star” and creating something pretty unique (and hullicinatory). Not really representative of GD, or really meant for Deadheads (for instance, my brother fell asleep while we were listening to it one evening), but fantastic if maybe ambient and psychedelia are in your list of accepted genres.

Correction: the first half of this was released in the 90’s, apparently–the version from 2014 includes another whole album’s worth of more material, “MIrror Ashes.” My bad.

That sounds really interesting - will give it a listen

I missed them completely, thought for some reason they were a heavy metal band. A friend lent me a copy of American Beauty, the rest is history. Workman’s Dead is excellent as well. The problem is there’s so many live albums, it’s easy to get confused.

The album I bought, for exactly the same reasons as Crispyduck, was Anthem of the Sun. I think it was an “anniversary” version - two different mixes and a live set.

i found I quite liked it.

The Day of the Dead covers album is very good. I’m a big fan of The National who put this album together. I found that some of the tracks on it are easier to get into than the Dead’s own versions and really show what great songwriters they were.

Will definitely have a look - thanks

You get 2 for the price of one, the National are a great band as well.