Changing Nordost Red Dawn to... what?

I`m currently using Nordost Red Dawn speaker cable, but after some system modifications it turns out to be a little bit too short.

I`m considering a change to a longer one, but well, does it make any sense? Maybe there is something better worth to buy in similar (or even lower) price?

What I mainly expect from the sound is naturalness, detailed diameter and precise, deep and springy bass.

Thank You for any help! 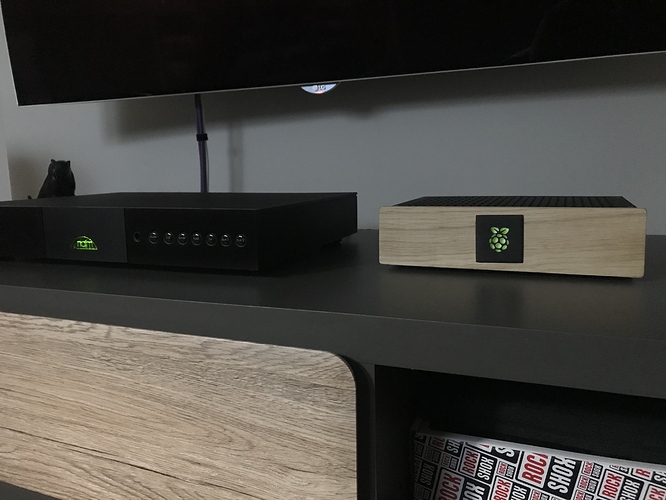 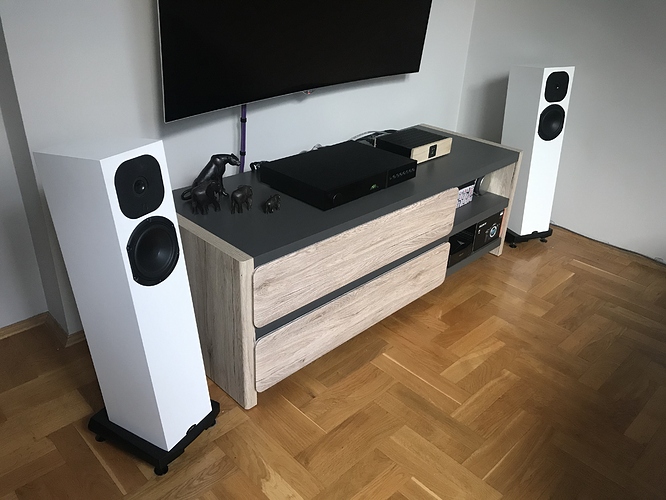 That’s a very expensive cable to use with a Nait XS and the Neats. If you need something longer you won’t go far wrong with a 3.5m pair of Naim’s NACA5.

I know its quite expensive, but I took it from my 2nd non-Naim system. It performs really good, and to be honest I don`t want to make a downgrade in the Naim-Neat system by buying some cheap speaker cables. I considered NACA5 but during the research I encountered different, quite extreme opinions about it.

Can you modify your cabinet to put the XS on the bottom shelf ? This would give a little more length to the speaker cables.
Is it the original red dawn or the mk 2s. If it’s the original one, the blue heaven mk 2s are a bit better and cheaper with the red dawn mk 2s better still.
Could be worth getting these in a more longer length than you need in case you change the system around in the future.
Great looking set up.

Thank You very much

I am pleased with the effect I achieved

I can`t modify it at all unfortuately.

I own the older version - Red Dawn Mk1.
Thank You! I actually like my Naim-Neat system more than my main non-Naim system

Nac A5 without reservation.

If you can afford it, longer lengths of the Red Dawn mk 2s should be a nice upgrade

If you buy the NACA5 used and don’t like it as much as the Nordost Red Dawn that you have right now, you can always sell it at little to no loss later. It is true the NACA5 is best value sound for pound but it’s quite difficult to work with the cable considering the stiffness of it. You can’t bend it too much to form a small circle or radius.

I have tried Nordost speaker cables many years ago, a time when i haven’t discovered Naim. I owned the Flatline Gold before upgrading to the Blue Heaven and SPM Reference. The SPM is not a Valhalla but it’s a high quality sound at a rather exorbitant price, at least to me.

I would suggest getting the NACA5 in the length that you require and compare it with the Red Dawn. If it fails to live up to your expectations you can always sell it. At least you’ve tried it once in your system.

Also using Chord Epic , haven’t used Naim cables for years as they were not very user friendly. I find the Epic a good match for Naim.

I had Nordost Red Dawn speaker cable for a while and shaped it for Naim NACA 5 speaker cable, it was far more musical. The Nordost was more detailed but it was cold in comparison.

Yes, thats ture, Nordost is quite cold, but thats what I like in the sound. I don`t like warm sound, it seems unnatural to me.

The mk 2s are a bit different. The originals are known to be a bit icy and hard sometimes, the mk 2s are known to be more all rounders.
I had the older version of the blue heaven biwire cables before the recent updates, and yes they were detailed but a little lacking in smoothness and flow - making everything sound a little rushed, apprehensive and uptight. Great for some music but not for others.
Put something low and slow with flow, the music would sometimes trip over itself.
I don’t notice that with my red dawn mk2s. Not warmer as such and not lacking in any added emphasis of musicality.

Also using Chord Epic in my main system, firstly Twin but currently Reference (basically it is a double Twin) with an important leap forward in SQ, the character of this wire being basically neutral and true to the source.

I was a strong proponent of most things Nordost (power cables, interconnects and speaker cables) as was my hi-fi dealer, particularly for my system. But as I moved up the Naim route there came a point when we did not care for a 552 over my 'umble 52. At that point a complete re-consideration of the loom was called for and I ended up with PowerLines and SL speaker cables. The NACA5 was better than the RD mk 1 speaker cables in the system and allowed the 552 to shine and prove its worth. However, I ahve yet to find a better interconnect than the RD that connects my CD player to the 552.

As others have said, it will not cost much to try NACA5 speaker cable and it would be easy to sell on were you not able to get a trial set from a friendly dealer.

Don’t mistake warmth with musicality Jack, musicality is all about emotion, timing and realism. I was happy with the Red Dawn I was using until I tried the NACA again and then suddenly I was enjoying listening more. However if you do like the Nordost sound then something higher up in their range will suit you.

How many meters of naca5 do you have?
I’m wondering to buy this cable but I’m thinking about length minimum 3!5 or more?
I try red down nait xs3 splendor a6r They sound good but I’m not totally convinced