Cheer up, it is Spring!

(With apologies to Southern Hemisphere members)

This week brought the return of our personal harbingers of spring. Thursday we heard the first calls, and yesterday we had repeated flybys of our favourite spring returnee-the curlew. We have made a dot on the calendar for many years and it is amazing how we hear the first call within a ten day range every year, whatever the weather is doing. The air then suddenly fills with this lovely call and their gliding flight over our house and the surrounding fields.

The shrill oystercatchers appeared again about 2 weeks ago but we’ve not had the wheezing, acrobatic lapwings yet. Both seem far less reliable in terms of their date of return. Lambs will appear here any day and the hares will become more visible and active yowards the end of March. Sadly we get fewer otter sightings now as lesiure traffic on the canal increases around early April and they seem to restrict their roaming to the river nearby.

How is your spring going?

I’ve had curlew all winter, at the moment our resident population is stuffing itself on drowned worms from the flooded Thame & Ray rivers.
I saw my first field of lambs only yesterday, but am aware (pub talk) of a a few flocks that arrived 2 or 3 weeks ago.
The winter starlings have gone as I have not seen large murmuration displays for 2 weeks. The summer residents have not arrived yet, or at least I have not seen any at the traditional nesting places.
The hares have started getting frisky where we normally see them on RSPB Otmoor, but they are a bit restricted with dry & large enough land areas due to flooding.
Red kite pairs are have started formation flying & tumbling together with locked feet.
The buzzard pair is back.
Jackdaws & crows have been paired up all winter (as they do) but I’ve seen some carrying nesting twigs.
It looks like the winter blackbirds have left, I’m not sure if the few we have left are the summer migrants or not; the males are looking in pristine breeding condition & I’m pretty sure they are the summer birds as last evening at almost dark dusk I heard two of them territory singing.
Lots more to come, but it will be nice to get some dry dirt to walk on.

I admire the sentiment Bruce.

But it has been such a wet winter in the UK that I feel sure there is still plenty of time for another Beast from the East. Somebody here will know what the jetstream is doing, whether it has shifted, oscillating etc. So I fully expect to be corrected!

It’s great to see a bit of green, new buds, a blue sky, feel the hint of sun on your back.

Frogs laid spawn a couple of weeks ago - a tad too early I think as it’s gone colder here.

I am curious Mike that your blackbirds seem to be seasonal. We have a pretty all year round population including one that yells at us outside the backdoor. He has a distinctive grey/white streak so I’m sure he is resident

Our other winter visitor that will soon go is a pair of Goosander. This is the female. 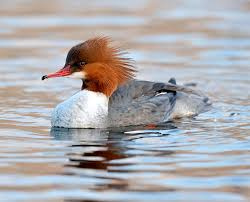 Striking birds that have become regulars on the canal outside for several winters, and quite easy to approach. Apparently they nest up to 30m (yes metres) off the ground and the chicks then drop out when hatched! They seem to go elsewhere to nest though as we only get adults in the winter months.

I am curious Mike that your blackbirds seem to be seasonal.

One of the best kept bird secrets, blackbirds do migrate, or at least many go somewhere else for a season. Scandinavian birds do come to UK but as I understand it UK birds can/might just move further south or maybe go over the channel.
A few years ago we had a male with a white tail feather (distinctive) stayed for about 3 summers & raised a few clutches, but he disappeared for each of the winters returning again in spring.,.

We have the pesky starlings nesting in our soffits again. They were banging around earlier, like they were using little hammers to build the nest. Heaven knows what they are up to. Each year we think about blocking up the gap beneath the tiles but starlings are on the Red List so we’d feel too bad. There are absolutely loads here. Maybe that’s why they are rare elsewhere.

I know what you mean. When I see the gulls that have made it on to the Red List, I wonder if the compilers ever visit West Cornwall!

Every year we have sparrows nesting in a hole in our soffits where the timber has rotted away. I really should fix it before the rot becomes a real problem, so the poor birds may have to look elsewhere. Unlike starlings, they are not noisy, so I may see if I can put up some nesting boxes after the repairs are done.

Up here on the Cotswolds the wet winter, and some flea beetle, has destroyed the rape crop, and ground that had been prepared for winter wheat was only sown a couple of weeks ago. Although it has just sprouted, many fields are too wet to sow. Nevertheless, the skylarks are singing despite the lack of cover for nests.
One observation: a sparrow has taken to sitting on the rear handle of my pickup; s/he pecks the windscreen in attempt to deter the interloper mirrored in the glass. It’s amusing, if very messy.

Must be spring. Cricket nets start tonight. The definition of optimism!