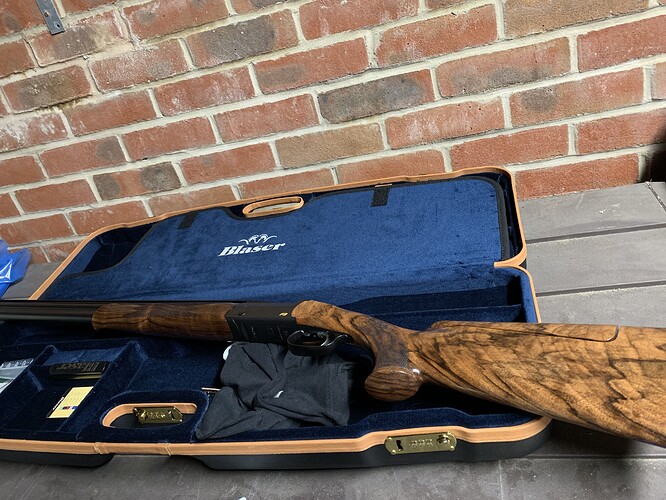 Yeah just the light… it’s grade 7 wood but to be honest, I’ve got an old browning semi auto and I shoot so much better with that!!
The blaser stays in the cupboard most of the time !

Oh… and the blaser barrels went rusty and I had to get them changed under warranty!
I had a browning 325 o/u for years never a problem…
bought the posh gun, failed within a year!

Many, many moons ago, I turned up for my first time at the local clay pigeon shoot with my trusty Mossberg pump action … only to be informed that my weapon of choice was somewhat frowned upon by the posh clay pigeon fraternity.

Fair enough, but when I next went along with my new Remington over and under, it seemed that my credibility had been shot, ('scuse the pun), for ever. 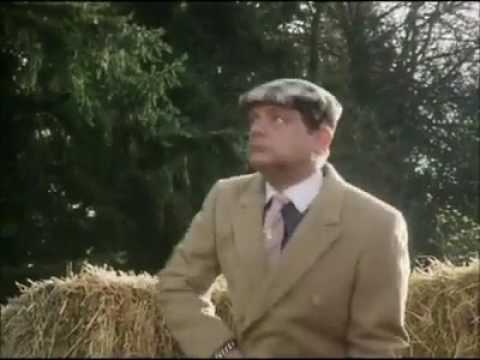 I’ve just had a look at your system…

My life that is something else!!

Have you got a picture? 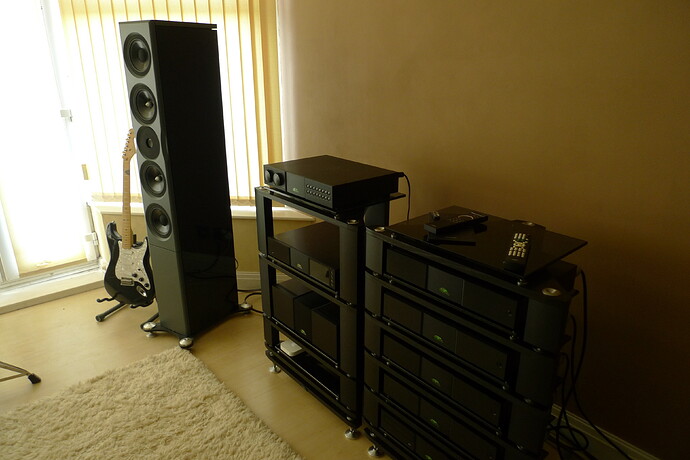 So impressed with them! Did you manage to line up all the text to the front on the 8 feet? 7 worked perfectly but the last one is at the back!
Can’t see what difference it makes though? It was either that or uneven.

Managed to line them up fine, after much to-ing and fro-ing, as they kept sending the wrong thread sizes for the Neats … third time lucky, and all was well.

I wasn’t sure what to expect from them, but the vertical soundstage has expanded massively, with vocals lifted above eye level, which is just perfect as I ease back into the recline position in my Stressless.

For the money, what an upgrade!

I knew I was onto a good thing when, in desperation, I called Bob Surgeoner at Neat to get the thread size info, and he informed me that he had recently installed them on a pair of XL10s, the current model of my speakers, in the showroom, and that he was highly impressed … say no more.

Which would you recommend for my system?

I’ve been right through the Neat Ultimatum range, MF5s, MF7s and my current MF9s, though I’m not up to speed with others in the current range.

Down the years on this forum, I must have bored folks to death … “he’s off again, plugging Neat speakers with Naim kit” … but there’s a definite synergy between Naim / Neat, so I’d keep an eye out on the pre-owned market, or speak with Bob Surgeoner, definitely one of the good guys, and he’ll be more than happy to advise.

Must find a decent gunsmith as the lower firing pin on my Miroku (12) is worn.
Was only talking about shut gun thingsyesterday with a friend.
Also have a problem with a browning (20) semi that refuses to eject. My friend’s solution was to only buy Eley cartridges.
Of course the gun that never fails is my father’s old Baykal (12).

Whilst not an owner/shooter myself, the name Miroku brought back memories: in my teens (1970s) I had a summer job in the offices of Parker Hale Limited which I believe was the sole UK importer of this brand.

I did get to try trap shooting a few times - useless

- but as a colleague said: it’s a quicker way to dispose of money than putting it down the drain!

I attended the British Trap Shooting Grand Prix (Sealand) four years but, happily for me, the bug never bit and I’ve had no inclination to see if my aim has improved

I’ve got an old Parker hale over and under… great little gun! It was the club gun and I used it so many times I ended up buying it off them…

Takes years to get good at it thou! I used to carp fish regularly but since having children I needed to find a hobby that didn’t take me away all weekend…

It’s nice doing it in the summer. Great pastime

Did a fair bit of Clay shooting some thirty odd years ago local farmer used to let us use certain parts of his land on Sunday mornings but also went to a few clay shooting clubs very enjoyable.

Problem is that clay shooting is no longer cheap. Cartridges are about £210/1000. Not too long ago they were less than £100/1000.
So, whilst the cost if clays may be cheap, it’s the Cartridges that pushes it up.

Very nice. I have Browning ProSport as my preferred piece but a collection of Miroku and a Nikko Shadow Indy Skeet. Only recently have we had an opportunity to get out due to Covid restrictions, there is a club shoot towards the end of June so I’m keen to get some practice in.