Magic Eraser works better than anything else I’ve tried.

Please stop using any wet cleaning system with this cartridge immediately. It is clear from photographs taken that the cantilevers corroded and subsequently failed during play. Both Krystals were more than 12 months old.

Some prices are crazy. I use a little brush. Paid it maybe 5 euros. 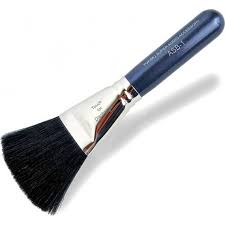 I used many types but this is what I use now.

Same here! The one that I use is identical to the one in your photo.

It’s very effective, and above all very safe - with the caveat that you don’t attempt to use it after a particularly heavy night on the town.

My concern with the gel things is that they may be a bit tacky/wet but I’ve never used one - I’ve wondered if you got the lowering down wrong if the exposed tape on the cartridge body might wick up moisture?

I have a project goo ball which I’ve barely used designed for getting dust off LPs or potentially cleaning cartridges but I’ve never felt inclined to do the latter.

There’s no moisture on the gel. It relies on surface tension IIRC.

It seems a little surprising to me that if Linn are aware that the aluminium cantilever can be damaged by fluids that there is no information leaflet advising against commonly used cleaning methods in the cartridge box, and equally odd they don’t provide some ‘green stuff’ with the cartridge if that’s their recommended cleaning option.

I totally agree! I’ve not owned many different carts but the ones I have had (Apheta2, DV xx2, EMT JSD 6) have all been conspicuously vague on cleaning advice. Why is that? Rega even suggest that the stylus itself is a cleaning device for records! I think most active Hi-Fi users know that keeping your kit in good nick does make a difference - be it your connectors, your stylus or your physical media, then why do so many manufacturers seem to put so little emphasis on this?

I am tempted to try the DS audio dst 50 pad. Anyone out there use one?
I currently use silly putty, as stated in another similar thread. Seems to work…
Scott

I’ve been using the ST-50 for two years. It works great and has a good user experience. When it gets cruddy with dust you just rinse it off under tap water. Just put it on the platter and cue the stylus down on top of it a few times.

Yep, another DS user. I think it works better than the Onzow. And, as I think JDP has said, it’s nicely presented - a metal case with leather bottom. Looks cool. It’s about my only bit of accessory kit that my wife has never commented on (most of which have garnered a " what is that ugly thing. Spoils the look of the Linn…"
I remember a bright yellow plastic velvet pad was a particular dislike. I had thought, she being an ex-punk (is there such a thing, lol) that she’d like the yellow…

Yes, recommended. Expensive, yes, but so is my Lyra cartridge!
I also find having clean records cuts the build up of dirt on the tip of the cantilever. So any second hand records get a through washing on the Keith Monks before being put anywhere near the platter.
Also records are never left on the platter, either they are playing or back into their anti-static liners & sleeves. Plus the lid of the record player is taken off to play records and put back over when finished.

I use the Vinyl Passion Dust Buster which seems very similar to the ST-50 in concept.
It works as advertised to clean off obvious dust build-up, but I do worry about the possibility of some of the chemicals in the sticky pad damaging the stylus in the long-term
Does anyone know if there are significant differences between VP’s ‘specially formulated polymer’ and ST’s ‘micro-dust cleaning gel’ ?

I don’t know the chemistry. I started off with ‘sticky’ cleaners with the VP. Seemed to work well but I began to worry it was too sticky, and once after cleaning, I thought (it was some time ago) I saw some black residue left on the tip. I changed then to Onzow and the DT, which, with an occasional AT buzz, do a good job.
I have read about some using ‘Moongel’ pads (US mainly, I think) which are (IIRC) used to damp drum shells. They seemed to be similar to the DT pad.

I was going to ask if cleaners such as groove hero or audio technica at617a are not a simple answer.

(Same one I use also)

I use those. Work very well, and are very cheap so I just replace them instead of washing them like people do with the Zerodust

(Same one I use also)

I think mine came with my Dynavector (DV20X2), but I’m not sure.

I used to have an AT 617. It worked well, but I grew increasingly concerned about using it on delicate MC carts. Seems to me that the vibrations from the pad are a relatively violent shaking for such a sensitive assembly to handle and I worried about damage.
Sadly, there’s always a bit of Audiophilia Nervosa lurking in my mind …!