Close to the Edge

Apparently, Close to the Edge by Yes was released this day in 1972.

I was listening to the Close to ….title track yesterday on the Keys to Ascension live album (which itself is now somehow 25 years old, don’t ask me when/how that happened) and I couldn’t tell you what the band were on about or even ‘on’ at the time ‘Close to…’ was written and when I bought the actual album nearly 40 years ago it was not instant or accessible but it was/is so of its time and over the years I’ve grown to appreciate/love the brilliance of the music - even if I don’t understand it!

A fantastical and unique album. It’s stood the test of time and sounds as fresh today as it did 50 years ago.

I’ll never forget the “Next Lines” round of one episode of the comedy quiz “Never Mind the Buzzcocks”, when the host Mark Lamarr asked Rick Wakeman the next line to follow “Bluetail, tailfly, Luther, in time, Suntower, asking, Cover, Lover, June cast, moon fast, as one changes, Heart gold, leaver, Soul mark, mover, Christian, changer, Called out, saviour…”?
Of course, Rick was distracted with a kiddie’s colouring book; “Aw, you’ve made me go over me lines now”!
Lamarr gave the next lines “…Moon gate, climber, Turn round, glider”, adding sarcastically “From the Yes ‘singalong’ track Siberian Khatru”!

Bought the LP on the day of release, and have it to this day (it actually got a spin a couple of weeks ago).

Subsequently bought the 2003 expanded and remastered CD, and the later Steve Wilson mix.

Counting the individual tracks from both official and, er, non-official “live” offerings, I have:

I saw the current incarnation perform the whole album in Birmingham on my 68th birthday in June (2022).

I suppose that makes me a boring old fart.

If those are the criteria to be an old fart then you may be in good ( or bad!) company on these pages!

Over the years I’ve loved Yes’s music I’ve always thought it came from a unique place. I joked earlier that I don’t understand it, and while that’s true, I’m not going to try to now because I’m not sure I need to. I get it, on whatever level that requires. I don’t speak Latin but Spem in Alium works for me too.

I never understood why Rick Wakeman has a downer on Topographic Oceans - I’ve seen him use words like [sic] overblown and pretentious but I’m left scratching my head because to me it fits with the rest of the stuff they did in the 70s. This is the decade that gave us the Countach, glittery platform boot and electronic calculators so why not push musical boundaries?

I don’t think 15 versions of And You and I can be wrong either. It has changed over the years. On Yessongs it has a more frenetic quality from a younger band that just wrote it and you’re hearing it played in the context of its time. The prevailing zeitgeist maybe. Later versions are more considered, more detailed, audio quality better and updated for later sensibilities. It’s my favourite crazy track of all their crazy tracks and I keep coming back to it. How many rock tracks used a slide guitar?

I probably am an old fart too but at least not by the definition of the Linn (?) advert from the 80s, if you remember that one! 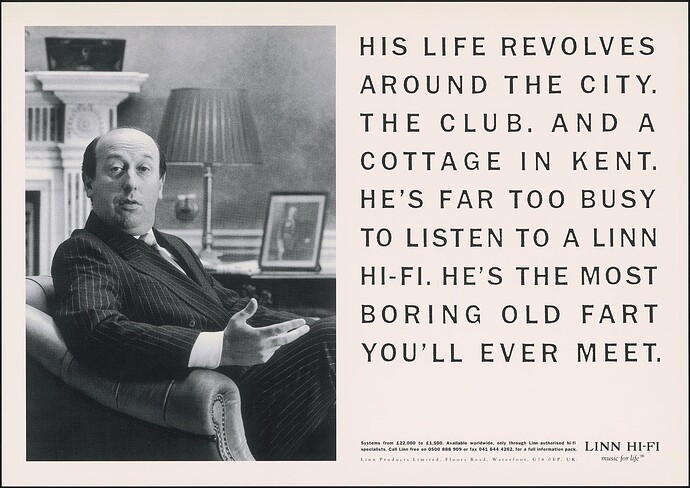 It’s quite a diverse mix of folks on this Forum. I opened this post expecting it to be about the remix of Grandmaster Flash’s seminal rap belter, “The Promise”. How wrong can anyone be?

I always thought that Linn had used that man in the advert because he looked rather like Naim’s Paul Stephenson, and this was around the break up of the Linn/Naim alliance.

Have I got that entirely wrong?

Sorry, never heard of him.

No need to apologise suzywong, I’ve never heard of Steve Wilson either!

That’s the one, thanks. Ever since I saw that as a student I knew I didn’t want to be ‘that guy’ and I’ve had to check in with myself a few times to make sure I’m not!

Just back after 6 days and 2000 miles across to Tuscany and back. The system is barely above cold, but I’m listening to the “Edge” on the Keys to Ascension live album and it is sounding wonderful and I’m hearing things I didn’t notice the last 10,000 times I played it. In particular the bass seems ‘up’ in the mix tonight. How on earth can that be?

Yes, entirely wrong. I was at Linn at the time and was involved that series of adverts.

Nothing whatever to do with Paul Stephenson… in fact, it never occurred to me until now there was any resemblance. I still think there isn’t. I think Paul still had his ponytail at the time.

Actually, we had a guy phone us at Linn, telling us that his colleagues at his bank had seen the advert in The Telegraph (it was a half page) and suggested he called us to ask for a free hifi as he looked exactly like the guy in the photo, spent his evenings in his club in London and had a cottage in Kent.

Needless to say, we didn’t give him a free hifi… too boring… 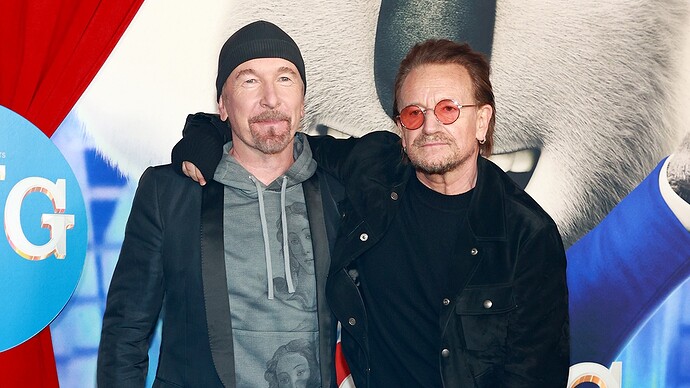 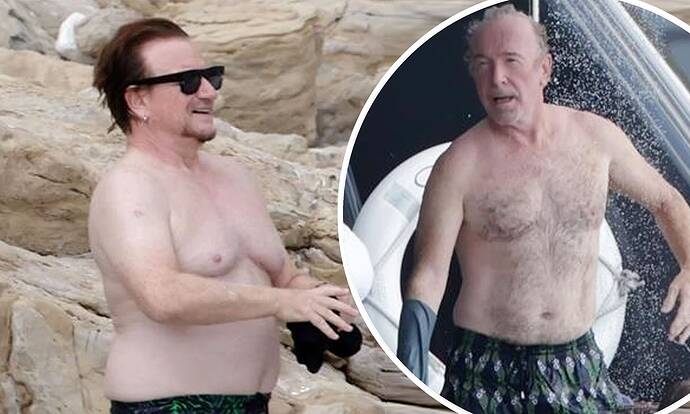