Enjoying the triathlon, disappointed with England and Wales in the Rugby 7’s, and England’s performance in the Velodrome.

Great crowds for the triathlon and I like the way swimming has integrated the para disciplines.

Strange to see T20 cricket part of the setup. I can’t help thinking the Hundred would have been a better option as it’s shorter.

I won’t comment on the geopolitical aspects and contradictions except to say it’s good to see individual nations / territories having the opportunity to compete.

A glorious day to be out swimming, cycling and running.

Would have loved to have seen the swimming finals last night but they’re on at a very inconvenient time here. Got to see Aus v India in the T20 and some of the heats at the pool.

Great to see the weather is being kind. Might have a late one tonight and watch a little more.

Impressed with the Canadian rugby 7’s.
Loved the cycling, even enjoyed the swimming.
And that Welsh light heavy weight - wow those body punches.

Big stack in the cycling, hope your guys’ ok. Coming off at 70ks must hurt.

I’m getting a bit tired of hearing athletes going on and on about how much work they’ve put in, and the sacrifices they’ve made.

What do they want, a bleedin’ medal?

Very frustrated not able to watch my favourite sport ( badminton)on the iPad.Being 6500 miles away it’s only on the BBC iPlayer and this platform is not supported outside of the UK.So have to make do with just looking at the results.Urrrggghhh.

Unfortunately I have got to see much of the games, broadcast start late at night and ends early in the morning. If it was summer it wouldn’t be that bad but I can’t get motivated to get up early on a cold winters morning.

Gutsy performance from McClogan. Quite extraordinary!
Watch it on iPlayer.

Eilish was fantastic. What a race.

Well it’s all relative of course.

We got lucky with our seat allocation today for the beach volleyball. We saw three matches, two womens’ matches, followed by a close contest in the mens’ between Canada and Gambia.

When one of the players arrived on court, Mrs R gasped: “My gosh! How tall is he?” 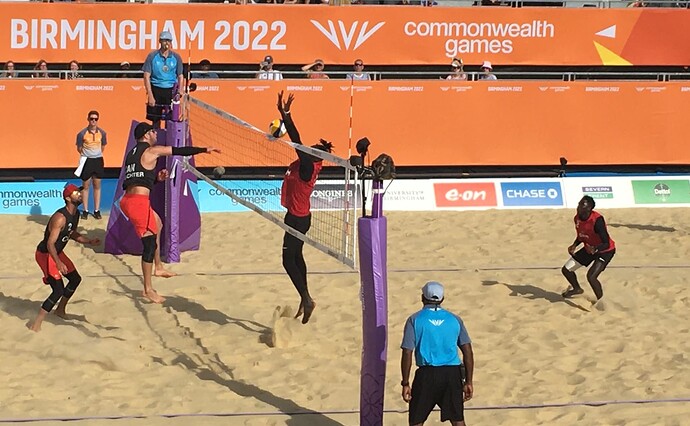