Well, yet another one bites the dust.

A nice Samsung one died a few years ago, I found a YouTube fix (the monitor displays an image briefly then shows nothing) involving replacing a component but I never got round to it.

Yesterday moved a 1080p Dell monitor purchased in 2018 normally used with an old Mac Mini into daughter’s room to allow her to use recommended dual monitors for an online course hooked up to het MBP.

Ten minutes before the course started the monitor failed so quickly replaced it with a small TV.

As many will probably know Apple drastically reduced physical ports in recent years (a bit better currently) on their computers in favour of fewer Thunderbolt/USB3/4 connections.

I got a Thunderbolt adapter providing ethernet/HDMI/2xUSB2/2xUSB3/SD card connections some time ago - this worked quite well with a different monitor last year but has killed a few SD cards from a cheap drone (at least that’s my suspicion).

Probably jut the heat yesterday caused the monitor which has been unused for a couple of months to keel over but I do wonder about the 3rd party peripheral.

Monitor PSU LED is on so doubt it’s that but don’t have a multimeter handy to check.

Monitor itself is lifeless. 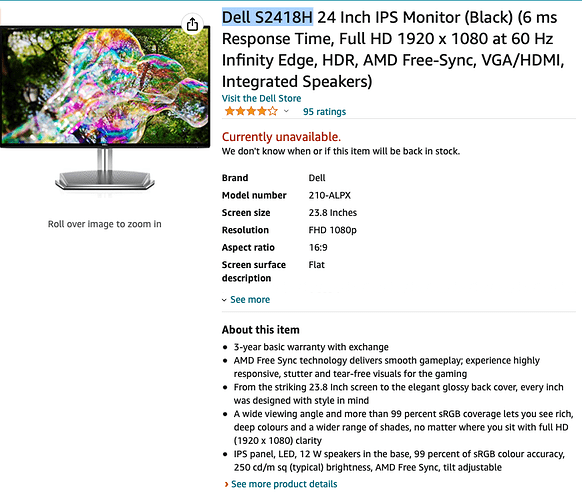 Any recommendations for a replacement?

This has some useful information, although for me I am still searching for my particular needs….

Thanks JOF - will take a look at that thread.

That Dell was cheap, my main one is considerably better.

Things move so quickly in consumer electronics and while I’m an Apple user who hates ‘all in one’ Macs I’m always impressed by the quality of their devices displays such as daughter’s non-current MBP.

Not necessarily looking for the best monitor here just a decent relatively low cost one.

I use high-end professional quality monitors for work but at home good value functionality comes into play in many areas.

Has anybody used a monitor as a replacement for a TV?

I have Apple TV, Sky Q, a Uniti Qute that I se as a DAC , so I’m thinking I have the inputs via Sky Q and Blue Ray, sounds controlled from my Sky to the DAC , surely a decent monitor for gaming or photo would be just as good as a TV

Many thanks, I have an elderly Sony Full HD , 24 inches - and it’s very good for what I want.

Eizo is also a great brand with a huge variety of monitors. The EV series might be an interesting replacement for your Dell monitor.

Eizo has a focus on image quality, indeed its top monitors are designed for photo retouching, I personally like them a lot. But the other models in the low range are pretty good too according to their price range.

Odd this isn’t it - the Samsung monitor I had which died was 24" and 1080p, with a reasonable speaker built into the stand though a bit of a dust/crumb magnet.

I’m probably wrong but I’d be surprised if there were huge differences in the cost of 24" HD vs HD ready panels these days and you’d think manufacturers would streamline their component ranges.

Thanks for all the tips so far, I’d forgotten about the Iyama brand.

The main reason I asked was that Dell used to have a good reputation for monitors a few years ago when I bought a few - this may have changed.

I don’t want dirt cheap, nor high-end currently, and may hold off a little as it’s not an immediate essential. I use Eizos for work and they are very nice I agree.

I’ve just found a VGA to HDMI cable which may work with a couple of old LG/Samsung VGA monitors which are doing nothing - got the cable originally to try to connect a raspberry pi for the kids, but doubt they’d be interested since they have their laptops.

I recall considering HP & Dell, when I bought it.

My two Dells are that model, maybe slightly younger.
They do the job, although the colours are very slightly different.

I have a 17 inch Dell from 2007 with VGA/DVI inputs still going strong. I also have an Ultrasharp Dell U2713HM from 2014 and a 32 inch HP OMEN gaming one (2016). I use the bigger ones with both PCs and TV via the SiliconDust HDHomerun Duo tuner + digital antenna stuck to one of my windows! All great!

My first LCD display was a Samsung in the late 90’s (I think), it still worked last time I checked but was probably XGA or SVGA so resolution will be poor by current standards. It was £700 or so.