Configuring the network for streaming/AV

Hi, my current network setup is pretty basic and wanted to get some advice for some of the networking gurus on the community.
Home internet is BT Infinity feeding into a TP-link Archer router and wifi is via Google Wifi. Google wifi provides DHCP for all wired and wireless devices. Wired devices are connects via two switches, one managed (TP-link) and one unmanaged (ChordEE8) as per the diagram below.

My question is, how can I optimally setup the streaming/AV network to minimise interference whilst still allowing iPad/laptop devices connected via wifi to communicate with the Audio/AV… 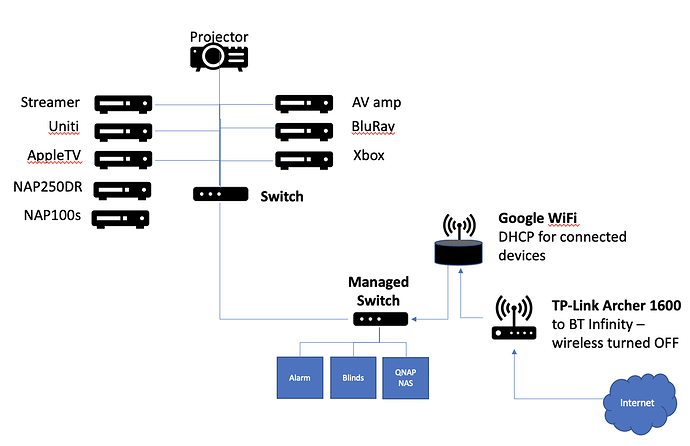 My advice would be to keep it as simple as possible, and avoid adding additional network hardware such as switches in the hope that they will improve sound quality, just use them where whey are actually needed. (Tweak it later if you must, but get the essentials running reliably first.)
One problem I can see is that you have Google mesh devices, on which I believe it is not possible to disable the DHCP server. So if you want a single, well integrated network you need to disable DHCP on any other devices such as your ISP supplied router and let the Google stuff run everything. If this is going to be a problem I would ditch the Google stuff and replace it with something like a Ubiquiti mesh network, or perhaps BT discs, which can be properly integrated into your LAN.

If your network is already working as needed and all devices can see each other, perhaps you’re already sorted.

Thanks Chris. Yep that’s the way I have it largely configured at present.

Some might argue that keeping non-audio devices on a different switch to the streamer provides some sort of isolation. I’m not entirely convinced that this is necessary (otherwise why would audiophile switches have 8 ports?) but there’s no harm in experimenting. In my experience there’s probably more to be gained by keeping devices on a separate mains electrical circuit with some physical distance between them.