Hello - I am new to Naim and this forum. After much comparison and consideration, I purchased an Atom system 2 weeks ago (compared extensively to the NAD M10, but was happier with the sound of the Atom). Since installing at home, have had multiple issues with connectivity. When the system works, the sounds is amazing - but the connectivity is horrible to the point that I am considering to return the system.

The system is an Atom paired with KEF R3 speakers and a Mu-so Qb2 in another room. The Atom is a wired connection, the Mu-so is wifi. I generally play via Spotify Connect. At least once per day, Spotify Connect cannot actually connect to the Atom. Spotify on my iPhone XS shows that the song is playing - but no sound from the Atom. Airplay usually works though - however, I prefer Spotify Connect due to better sound quality. If I factory reboot the Atom, then Spotify Connectivity returns.

I have also had problems with volume control - sometimes I am unable to control the volume on the Atom or Mu-so Qb2 with the app. Again, a complete reboot solves this.

Given the cost of this equipment, it feels like a daily factory reboot should be unnecessary. I spoke with my Naim dealer, and they have no idea what is wrong. They said that potentially it is a faulty unit. However, there is apparently a major firmware update for the Atom coming on June 15th and I was told to wait for that to see if it solves my problem. Again, it feels that for this price, the system should work as sold and not require me to wait another week for a potential firmware update.

I have read this Forum a bit, and connectivity issues seems extremely common. Having poor connectivity really ruins the wonderful audio experience for me. I would prefer not to return my unit, but am coming to the realization that I may have to. Any suggestions on what I should try before making that drastic decision would be highly appreciated.

Welcome to the forum. How you been in touch yet with your dealer or with Naim Tech support about any of your issues?

Thank you Richard. Yes, I have been in extensive contact with them. As I tried to explain in my post, they have no idea of what is wrong, and can only suspect that it is a faulty unit. Their advice was to wait for the upcoming firmware update on June 15th to see if that solves the problem. That’s all that they had to suggest.

OK, well that sounds like a sensible plan. Hopefully you can hang in there until the 15th. And if it’s still the same then I’m sure they’ll take care of you.

A lot of connectivity issues appear to be due to the network and exactly what equipment is connected.
My own Atom works faultlessly with no drops and is always found by the app.
I’m no expert on wifi and networks but it does seem that the network has to be top-notch, bullet proof and with up-to-date firmware etc.
Wifi extenders, multiple access points and clashing DHCP servers and rubbish ISP supplied modem/routers seem to cause quite a lot of issues.
It may of course be a faulty unit…

I’ve had my Atom for about 14 months now, and report no issues that might cause concern.
On a couple of occasions, I have had to shut down and reboot to get round a freeze problem.
All my connections are via 4G, supplied by the 3 network, so nothing exotic there - but it works pretty much faultlessly.
Which really, is all I want.

@cewheelock I had issues with my network. After I bought a newer network router/firewall/wifi device the issues vanished. So that might be area you should take a closer look.

Is the Atom connected directly to one of your router’s Ethernet ports? Do you have any other routers, range extenders, switches etc. in your network? There may be something in there that is upsetting the Atom, and it may be possible to track it down and eliminate the problem.

Did you try to use another streamer like Tidal hifi? Much better sound quality and your iPhone is just a remote control. Maybe no more connectivity problems. I got no problems so far with my Atom.

Thank you for the helpful suggestion. yes, the Atom is connected directly to the router (which was recommended by the dealer vs. a wifi connection). We have no other routers, extenders, etc. However, based upon comments such as yours and those above, I will try purchasing a new router to see if that solves the problem. Thank you for the help!

Thank you. I had the exact same problems with Tidal. I tried both Spotify and Tidal - on multiple iPhones. The problem keeps appearing - and nothing fixes it except a reboot.

Do you use a router supplied by your ISP? If so, I would think twice about changing it. Maybe run a separate one inside it, set to bridge mode, and also use that for WiFi.

Thank you everyone for your comments - highly appreciated. The common thread here from everyone is that we should buy a new router to see if that fixes the problem. Are there any suggestions on what routers are best? Our current router (from the ISP provider) is a TP-link Archer C7 AC1750. Considering to upgrade to 5400 Mb/s - is that speed necessary?

Just wanted to follow-up on this thread. I performed a hard reset of the router (TP-link Archer C7 AC1750) and the system appears to be working well now. Thank you again for the comments.

Well I have mildly annoying issues with my Superuniti. I have a Google mesh WiFi…the Superuniti is hardwired via my in-wall cat 5e network, not to my router but into the primary Google ‘pod’ (which in turn is directly wired to the router). So my phone is obviously wirelessly talking to the Google network.
So if I run the Superuniti over WiFi it’s all good…if I run it ‘wired’ I get ‘finding rooms’ popping up every five minutes which is a bit crap if you are in the middle of a search and it drops out. Thankfully whatevers playing still plays (which makes it tolerable) but it’s frustrating to say the least. The network is pretty strong wired or over WiFi…at least 50mbps at all times, so it’s not a weak connection.
My ND5XS downstairs is (due to non availability of a wired point nearby) run almost faultlessly over WiFi…with just the very occasional drop out (like maybe once in four or five hours of listening and then only for a few seconds).
If the Superuniti continues to struggle…I’ll just use the WiFi as the sound quality is still very good.
The firmware on the Superuniti is bang up to date too…updated by the dealer before I picked it up three weeks ago.

The fact it works wirelessly and not wired might be something to do with the MAC address which will be different for wired versus wireless.
Is there any way to wire the Superuniti directly to the router rather than the primary mesh pod? Even if it’s temporary in order to test it?

I did that initially and it didn’t work at all. The fact that moving it to the ‘pod’ makes it work suggests it’s the right thing. Basically my phone talks to the pod via the mesh and the Uniti talks to the pod via a wire.
My TV iPlayer works brilliantly over the mesh…as I say I might just abandon the hard wiring.

It’s just basically all round rubbish that puts off many people from adopting Streaming…it’s why at work we have IT departments. Naim need to have a support line (a bit like all the suppliers of IT hardware and software have) as essentially that’s what these pieces of equipment are these days. It’s not just connecting boxes using RCA (or Din) cables anymore.

Welcome to the Naim support pages. We believe that many of your questions can be answered using the resources below, in particular the simulators for our newer products. Please use these in the first instance when looking to resolve any issues,...

And of course, you are also welcome to apply to join the Beta forum, by just emailing beta@naimaudio.com, giving your name, forum username, and details of the Naim streaming equipment you have.

Thanks Richard for that info…much appreciated.

After the little moan last night, today in a break from my current home work life my missus was complaining that the weight of the Superuniti on her dressing table (nice 1970 G-plan) was causing her top drawer to slightly stick. Sure enough after a couple of weeks supporting the not inconsiderable mass (12kgs) it had started to deflect!
Now being the reasonable bloke I am (and not wanting her to lose access to her knicker drawer) I brought down from the loft a mana sound table that had been gathering dust. This has moved the unit right on top of the network socket in the wall…so now I’m using a 1m patch cable instead of the previous 3m one.
I levelled the table…adjusted the four support screws (to get the plate glass evenly supported with the telltale ‘donk’ when wrapped by a knuckle) and connected up.
So far tonight prior to and after taking our mutt for his evening walk, it’s been streaming heaven…zero ‘finding rooms’ messages…the app on my phone has been rock solid!
So it would seem that the previous patch cable had a dodgy connection. There are eight channels…so I’m guessing that the music carrier and control channels are via different wires so if the control channel was iffy but the music signal channel fine that was why the app would lose connection but the unit carried on playing?
That would also explain why it was playing fine over WiFi (taking the dodgy cable out of the loop).
I’ve also been exploring the app functionality a bit more…exploring the Jazz delights of Tidal​:+1:

.
The Superuniti really is a great bit of kit for sure especially in a bedroom set-up where I would never get away with more than one box😉.
My missus however now thinks the mana table looks ugly and the new position interferes with the curtains…you just can’t win with a woman can you 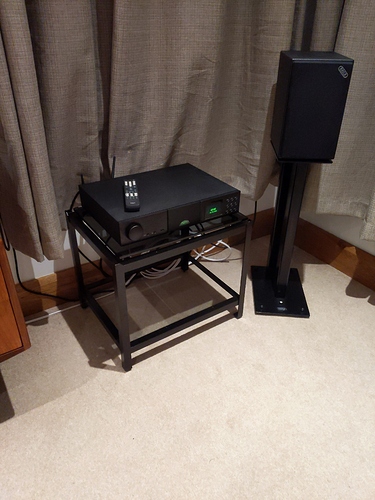 Even though she’s got her dressing table back…! 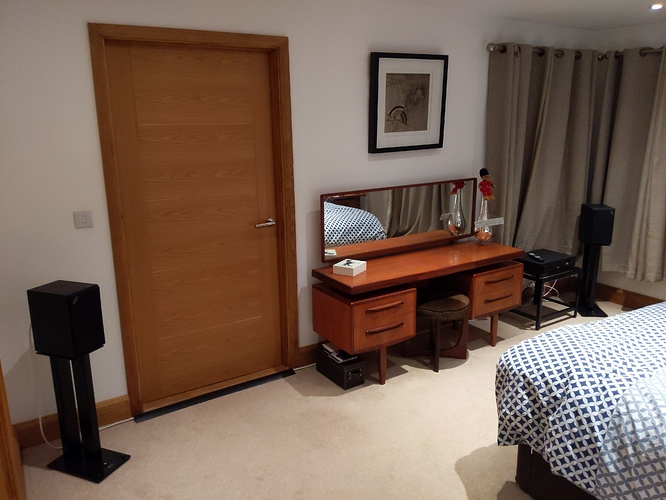 Sounds like you have found the issue. Always worth the reminder that a dodgy ethernet patch cable is sometimes more common than we expect.