Sorry for reopening a rather old chestnut, but Id love advice on any recent updates on which drive is best for a Naim Core please.
Trawling through the older threads, the most recent I can find saw @davidhendon suggest the Samsung 870 SSD. I think I’d prefer SSD over HDD for the reasons David suggested, i.e. noise and heat generation advantages, but I’m not wedded to that preference if anyone thinks any particular HDD is better for any reason.
Latest version I can see for sale on the web is billed as:

Is this the right one and compatible and best bet?

Yes that should be the one. It’s what I use myself in fact. 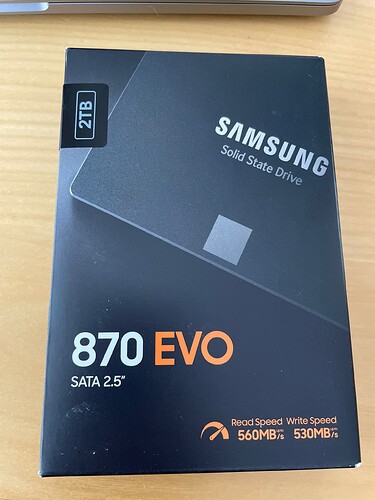 Thanks very much David. Looks to me like 2TB is the maximum size of storage available for the 870. Is that right do you know?

Another nod for the Samsung 870 EVO replaced my original HDD video type drive last year with the 870 EVO.

They also do it as 4TB but I see it’s showing as unavailable on Amazon, so you may need to hunt around and pay over the odds if you find one.

A SSD will be silent compared to a regular HDD. But many HDDs are pretty quiet now. SSDs don’t like being written to too much. So can be suited to music servers. But at a cost. A regular HDD will be significantly cheaper.

The Unitserve hdd I had was snoring like a french bulldog. The Melco hdd I have now is dead silent.

I use a regular HDD in my Core (IIRC it’s a Toshiba - very quiet too). It has been rock solid although I reckon I’d probably go with an SSD today. Note though that when an SSD dies it’ll do so suddenly and that’s pretty much it - pretty much unrecoverable. Whereas a normal HDD will often give you some clues that it’s on the way out before it finally dies. And even then much can often still be recovered.

The other thing about HDD/SSD is that because the HDD spins 24/7 unless you put the Core into deep sleep, the whole unit gets quite hot. With an SSD it’s cool as well as silent. And of course you aren’t writing to the drive that much, compared with say a PC where there will be a lot of writing.

You must be right about the hdd spinning 24/24 and running hot. However my Melco is always cold, maybe slightly warm.

That’s interesting to read David. My Core has an HDD and it’s either on or on Standby and it never gets any more than mildly warm.

When I first had my Core it used to get very warm when ripping lots of CDs.

I had quite a few early rips that I could not edit and dozens of CDs that I never played so recently I deleted and re ripped all my CD collection. I ended up taking over 200 CDs down the Charity shop!!!

With the SSD installed the Core ran extremely cool during the re rip process.

The 2TB EVO 870 is much more affordable today than when I purchased my Core several years ago.

I used the recommended HDD when the Core was first released, so it’s that drive I am talking about.

You might remember that an erstwhile forum member who was a professional reviewer, but has left the forum now, did an early in depth review of the Core based on one he had been loaned by Naim during the development time. He was quite critical about the decision to run the HDD permanently and the effect of that decision on power consumption and operating temperature.

I suppose some HDDs run hotter than others.

Yes, I recall. I never experienced anything more than warm though. Still, it’s likely moot these days as with SSDs being so much cheaper, I’m sure most will choose one over an HDD.

Just from IT perspective:

The 2TB EVO 870 is much more affordable today than when I purchased my Core several years ago.

Thanks to all for your help. I’m thinking I’ll go for the Samsung 870 QVO 4TB.
£300 or thereabouts, but peace of mind on noise, vibration, heat and environmental concerns + a lot of future capacity for hiRes files etc…

Following Richard’s questioning my comment about Core temperature if you have an HDD in it, I asked a friend who has one that is always on and he measured 28.5 deg C which is exactly the same as what I measure mine with an SSD to run at.

So it must be very dependent on the HDD then!

From the Horse’s mouth:
Latest advice from Naim Tech Support as of yesterday was:

The core has no specific requirements when it comes down to the internal drive - here is what we are currently recommending:

Drives labelled with ‘NAS’ are designed for always-on devices and should outperform standard drives for longevity.

The one that the customer is looking at would be an ideal match, and one, that as you can see, we recommend. So certainly, recommend him going with that.