Just got back from an interesting day out at Cranage and there were some really nice sounding systems on display this year. Naim presence in the Russell K, Neat, Kudos and Doug Brady rooms. Only photographed the rooms where the system held my attention. Concentrating on where Naim were used, these three rooms were show highlights (for me)…

Kudos: Wow. Every time I hear those Titan 505s they just get better and better. This time in active mode, source being NDS / 555. Amplification 252 250 / 250 / SNAXO / HI-Cap. One word - brilliant. Chatting to Derek, he said even though they sound at their best in active guise, even a modest integrated will drive them and still sound superb. 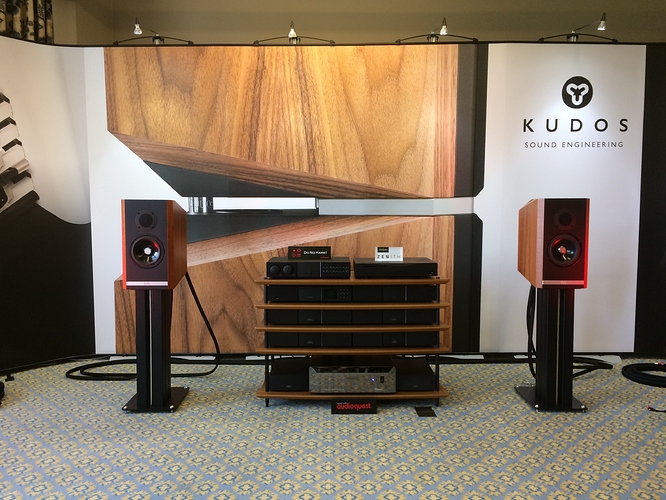 Russell K: The Red120s were sounding very good in one of the smaller hotel rooms, a rather unforgiving space, but still sounded tremendous - Melco feeding a 272 / 250 (i think it was) and as always, I do like Russell’s speakers. 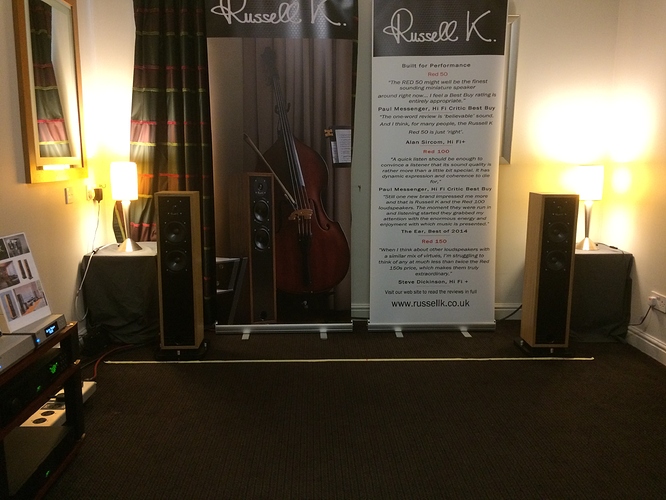 Neat: Well, Mr Bob has done it again. I really really liked the new Ekstra. It was being fed by a Raspberry Pi / Chord Doc, and a Well Tempered Versalex deck and was delighted to see a humble Nait2 on amplifier duties - go the Nait2! And was not in any way overshadowed, in fact it was one of my fav rooms insomuch as it was a real world accessible system not costing the earth. Plus Bob said the speakers will place close to a rear wall. A Knighthood for Bob? Soon one hopes! 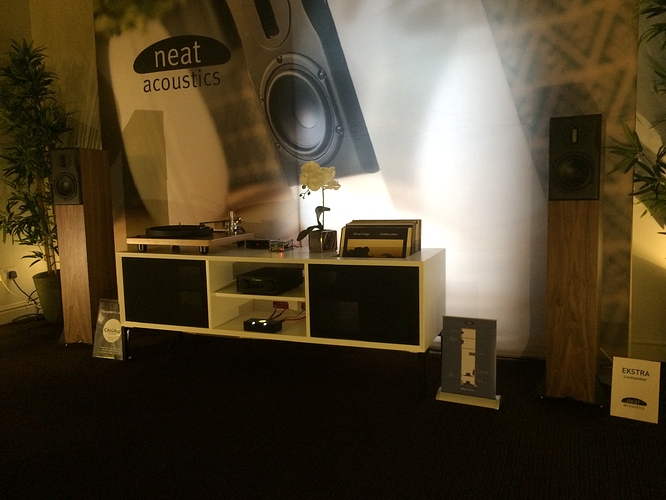 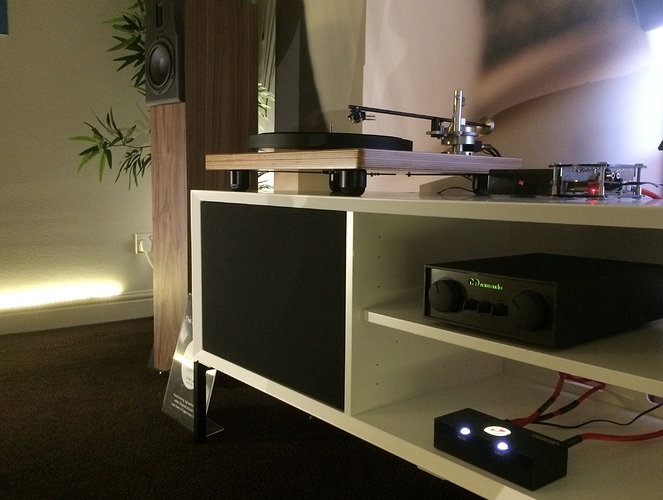 In other rooms, again only systems that held my attention…

CAD: This was in interesting, simply put one of the best digital systems at the show. Very analogue in sound and the scale of sound emitting from those Boenicke Loudspeakers beggars belief. Impressive. 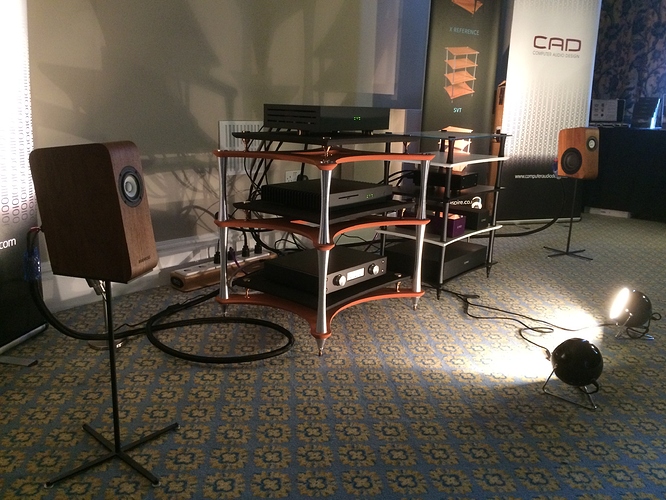 Kerr Acoustics: Now these were interesting. A new transmission line speaker speaker with a ribbon tweeter, very dynamic and a pleasure to listen to, if a little ungainly on their stands. 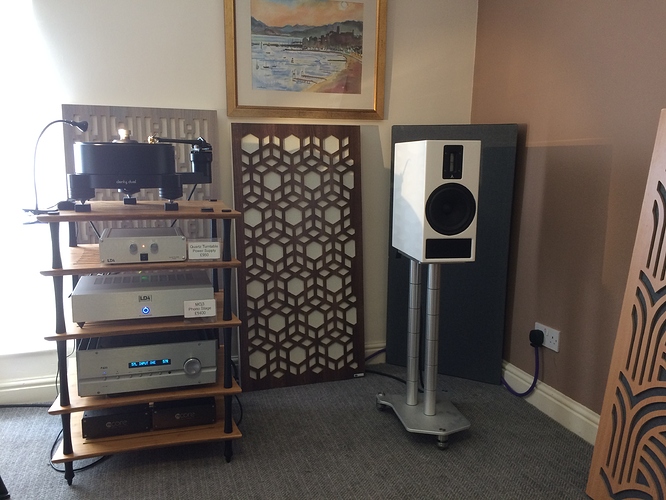 Falcon Acoustics: Their floor standers sounded very good, in a traditional BBC smooth sort of way, and would not be fatiguing over long listening sessions. 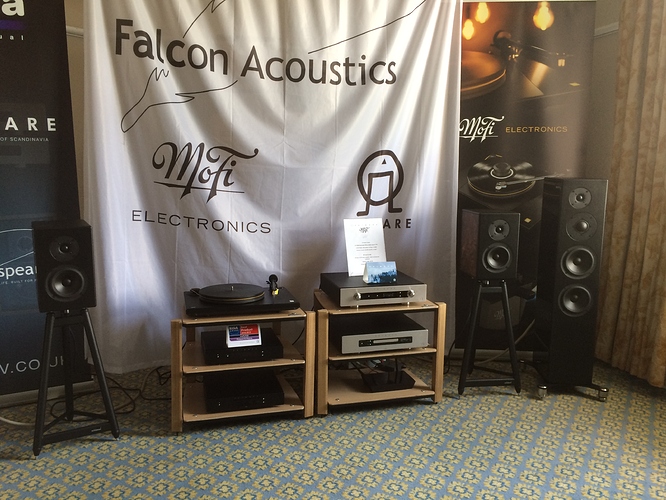 Kondo: I don’t know the full spec and cost, but this sounded very good, if a little polite, but had no trouble filling a large room with a good sound. 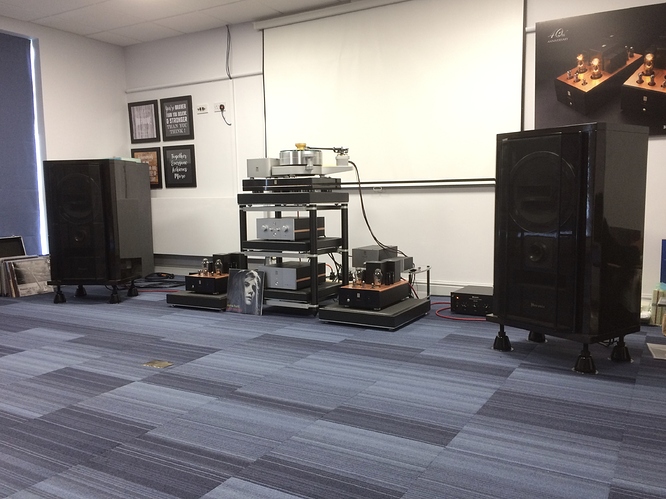 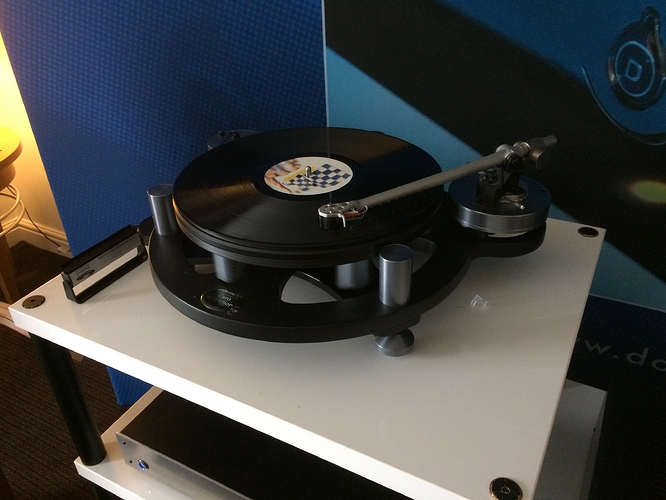 Other notable rooms… Hegel 590 and Amphion behemoths sounded very good indeed. Every time I have heard a Hegel amp, they just sound so effortless with loads of headroom to drive, well, anything really. This new 590 was no exception.

Avid turntables… A good sound from their new high end cartridge on their uber deck, but somehow a little over clinical in presentation. Beautifully made kit though.

And they were my favs. I overheard one conversation where this chap was slating the sound in one room where I thought it sound very good, just goes to show that everyone hears things differently.

The only issue was the heat, very very warm in some of the smaller rooms with fan noise competing for attention. But other than minor issue, well worth braving the dreaded M6 and popping along.

If anyone is attending and indulging in a little Carnage today, for the vinyl fans I do recommend visiting the Diverse Vinyl stand on the lower floor. They had a really good range of titles (Diverse in fact! I’ll get my coat) on their (pretty large for a show) stand too, mostly at high street prices, but not charging a fortune for the MOFI albums either, and quite a big selection of two LPs for £25. Fill your boots!

Thanks for the review. I thought the Kudos room with active 252/2x250 and 505 speakwrs was head and shoulders above the rest of the rooms. Very impressive indeed.

Yes, thanks for posting the pics and the report. Looks a good show with some interesting systems on display. I do like the Neat room - an unusual setup (got to love a classic Nait) but one that’s given me an idea …

It was a very good showing from Kudos, in a rather unforgiving large room too. Since the show I’ve been wondering how a more modest active 505 system would sound in a smaller room, perhaps with something like NAP200 or even 100s replacing the 250s as per the show system. An active NAP100 shoe box system would be fairly easy to accommodate and could be more than adequate for smaller environments.

I didn’t find the 505 head and shoulders above the other rooms, just a different presentation I guess. I equally liked the Hegel, Avid, Neat, CAD and Kondo rooms - each room a different sound. The Kondo & Hegel systems did especially well as they were probably in the worst rooms of the hotel.

In the original write up, I forgot to mention that there was a room (Babbage Room - Sound Foundations) with a rather lovely Clearaudio turntable (Innovation I think, and beautifully finished) playing into an Exposure 3010 integrated and Larson 8 speakers. Similarly to the Neat room, a simple system can be all one needs.

I was really looking forward to hearing an Original Live turntable as I’d never heard one of their TTs before, so was expectant given their reputation, but something was amiss. I listened for a good twenty minutes on multiple tracks, but in each case presented with a strident ear piercing forward sound, so assuming the deck was set up correctly, either a room or supporting component mismatch being at fault - I felt my ears were bleeding. Would still like to hear their turntables in a more sympathetic system and environment as they look beautifully engineered.

Yes given the room it was remarkable. Good bass extension but at same time bass was fast and lean, not bloated. Great timing and delicacy. Lovely and natural rendition of voices and instruments. Looking forward to hearing some of the other speakers in the range active (esp 606 and 808)