Yes, and Root was playing golf during Yorkshire’s last CC match when they lost and were relegated from Div 1.

I think the Test team is in Dubai preparing for the test series.

I don’t think any of the 50 over squad is in the Test squad. Very different to the Australian approach.

My understanding too, noting what Jos said too about having players elsewhere.

As was profiled during Covid times, it’s not just the game day commitment but having to do all the prep and travelling which eats out the focus and enthusiasm. With the old c.5m county season, while it was concentrated, the players at least had recovery time (2nd jobs!), with some playing the likes of grade cricket in Aus. Now, it’s all pretty much all year round for some.

Short form cricket needs to be short or not at all. T20 and 100 are good as they are intense.
Test match is an entirely different animal and interesting in a different way.
ODI is a halfway house and seems to attract the worst of the other formats and is, apart from the beginning and end, pretty boring to watch. It should be scrapped.

So it seems that the better players that were in a hurry to see their families and needed time out. Time out playing golf or at the F1. Kind of doesn’t fit some of the reasons given above seems more about money and privilege.

However as JohnF said short form cricket needs to be sorted and if these players aren’t interested in the 50 over game scrap it.

Having been sticking metaphorical needles into Australian Cricketers for the last month or so, I now am supporting Aus against France. Come on you Beauties!!!

Thanks however next year we’ll be sticking more than metaphorical needles in the your test team.

That is if they’re not playing golf or somewhere else for a nice photo opportunity.

Aussie kick off the test season with matches against West Indies next week then South Africa.

The Pakistan v England series might be more interesting, also it’ll be a bit of an insight to how both test teams are travelling as we head towards the Ashes.

The Pakistan series will be interesting but conditions maybe make it unlikely to tells us much about an English summer. Pakistan have a good crop of young pace bowlers, England struggling to keep theirs fit and too dependent on fast medium and a bit of pitch/ball assistance. We are also scratching around for a decent spin attack so I think it will be a struggle. I hope it will be a series when Brook establishes himself in the side, and Crawley and Lees repay the loyalty they have been shown. Not confident of that though!

I don’t know what to think about 50 over ODIs vs T20 internationals. It seems the movment at present is to a mix of only T20 and Test but I’d still prefer to watch an ODI than a T20 as a rule. Maybe the ‘cycle’ to the next ODI WC will increase the profile but increasingly these ODIs get squeezed into Tours rather than prioritised, and the format has minimal exposure in domestic cricket here too. International ODIs here are sellouts as a rule (as are Tests) but does that apply in other countries? Certainly these last three matches in Australia didn’t burnish the reputation of the format, or our ODI commitment.

50 overs game here use to be huge, with large crowds and live free to air broadcasts. Unfortunately all of that has changed and the recent ODIs v England have done nothing to help. If players can’t commit to playing for their countries maybe it’s time to cut them free and invest in those that can.

Must admit that I was more saddened by the news of Glenn Maxwell , than the England cricket loss , an excellent cricketer who always gives his best , and comes over as a thoroughly nice person 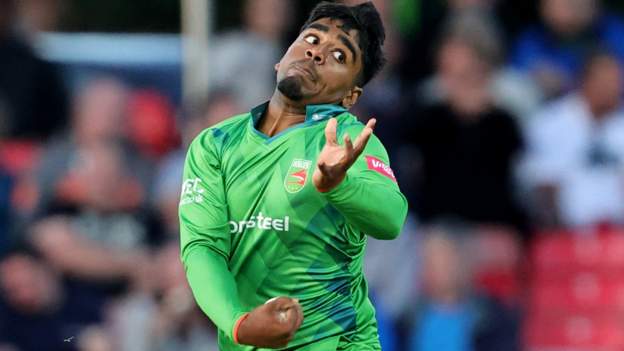 Leicestershire's Rehan Ahmed will become England's youngest Test player if he makes his debut in the first Test in Pakistan in December.

Yes, although he got tonked for a few in the warm up match! Hope he gets more of a chance than Parkinson who seems to have been discarded.

Great to see Jordan Archer bowled 9 overs in that too. Many have wondered if he would/could/should play red ball cricket again but looks promising.

Watching the ladies BBL and seeing two teams dressed in near identical gear/kit/uniforms .

Seen this happen in the Hundred/IPL/Blast etc .

Wouldn’t it be a good idea for teams to have an away strip or alternative colours ?

You should stop using logic.

Life would be much easier

It would, although in cricket it’s less important to distinguish than other sports, it’s a really rare occasion where you might need to work out which is your team-mate. (Maybe a throw from the boundary to a batter who’s made ground rather than your team mate, but unlikely.)
After all, in the 1st class format both teams wear white, but aesthetically I agree more easily distinguished kits make sense.

“England fast bowler Mark Wood has been ruled out of the opening Test against Pakistan due to a hip injury sustained at the T20 World Cup.” (Sky) 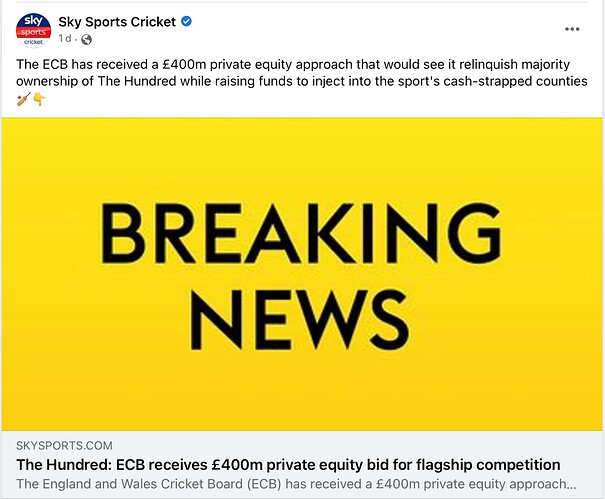