I have noticed that in the user guide of Supernait2 it is recommended to plug the amp to a dedicated mains circuit, preferably 30-45amp.
On the other hand the mains fuse is rated 3.15amps
Does this mean that on occasion the supernait may draw a very short burst of current of up to 45amps? Since it is short it doesn’t blow the fuse?

Will this only happen at high volumes or also at very low volumes?

I am asking since I do have dedicated mains circuit, though it is just 10amp, and I only listen at low volumes, so I wonder if I am missing out on some benefit or not

In a way the fuse is irrelevant here. Typically on a dedicated circuit, people would run as thick as cable as they can manage for good SQ. This might be 6mm or even 10mm. The fuse at the consumer unit is designed to protect just that cable up to the socket. So a 32amp fuse might well be used to protect a 6mm cable. The fuse in your plug is designed to protect the cable coming out the socket to your device, then in your SN2, you will find internal fuses of even lower value to protect the electronic components.

It is true that when you power on, the toroidal transformers can draw a big rush of current for a brief moment, but not normally enough to blow a fuse. Sometime however you can blow a fuse, and in that case people would replace the Consumer Unit fuse from a Type B to a Type C, which has the same current rating (e.g. 32amps) but allows a little longer for that rush of current to pass

Thanks
I’m not so much concerned with the blowing of the fuse (mentioned it in attempt to understand the logic of having different ratings along the path).
I am more interested to know if the recommendation for a 30-45amp mains circuit also applies for low volume listening, or am I fine with my dedicated 10amp mains circuit and am not missing out much on sound quality benefits.

I have no idea what is the thickness of the wire in the wall. As it was done by a qualified electrician I am assuming it is per the safety requirements for a 10amp circuit.

Firstly I am assuming this is UK? correct me if not.

I would say the cable size is a lot more important than the fuse size. In theory a 10amp might be used on 1.0mm cable, which is typically used in lighting circuits. This would have a potential reduced SQ.

Assuming there is a normal 13amp 3-pin socket on the end, then it would have to take at least 16amps, so must by definition be at least 2.5mm. Hopefully more

Did the electrician provide any paperwork? If not, you could turn the power off at the consumer unit, and take the socket cover off to look (and photograph) the cable - ONLY if you feel you are competent to do this.

This not for the UK.
The standard for a single phase 10amp mains circuit here is a 1.5mm cable. I have no reason to believe this is not what is installed.

The circuit naim recommend is about improving sound quality, which it does at almost any volume. I personally have a 10mm wired radial circuit to each piece of equipment. I tried a single 2.5mm radial, then a single 6mm radial, then multiple 6mm radials then finally ended up with multiple 10mm radials. The upgrade in sound quality between each step was very clear to hear.

Ah OK. Does the dedicated mains have its own Consumer unit, or is it linked in with your other circuits? To get the best, Naim recommend a separate Consumer unit using 6mm or 10mm cable. You will get some improvement even if you are only 1.5mm as you wont be sharing the circuit with other messy devices such as USB chargers, fridges etc.

Yes. That is what I meant by saying it is a dedicated mains circuit. It goes directly to the main breaker box and is not shared with other appliances. It’s just not a 30-45amps circuit. It is 10amp with standard wire gage.

So, thanks.
I guess I’m. Have to decide if I want to upgrade this circuit

FYI, below is my example. You will see the black box at the bottom, called a Henley box. This is where the electricity comes from the meter. From there it splits into the above big white box which is the main consumer unit for the house, and then the smaller white Consumer Unit on the far right hand side. The second one is for the HiFi, so it has its own CU and its own 32Amp fuse. You will also see that thick black cable coming out the bottom. That is the 10mm Steel Wired Armour cable that go to the hifi. Obviously your electricity regulation will be different fir your country, but this might give you an idea on what people on this Forum typically called a dedicated circuit. 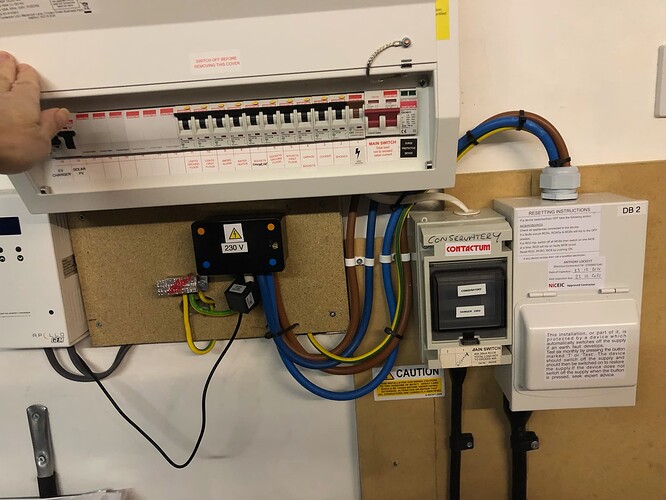 Thanks.
But to me it looks like the dedicated white box for the 32amp breaker is not fed directly from the Henley box. It seems to be fed from a white cable coming from above, probably from the red mains switch and/or surge protection. It seems also the logic thing - otherwise I would think it is very unsafe wiring. I bet that if you knock down either of those red switches your hifi gear will shut down.

Your consumer unit is relatively small which is probably why it makes sense to add another consumer box for a large 32amp breaker, otherwise you would not have much more room for future breakers add to the main consumer box for “regular” usage in the house. It also make connecting those thick wires easier.

Here is my consumer box as reference. It’s a 3 phase system with a total of 190Amps. The Henley box is the one in the middle with the “lightening” mark on it. I’ve got plenty of room within the consumer box to install a 30-40amp breaker that will go directly to my hifi. In the right side of the image the plastic cover is removed and you can see 2 metal rails - those are used to mount the breakers - plenty of room.
But, again, I don’t see how it can bypass one of the 3 main switches (3 phases) and the surge protection. 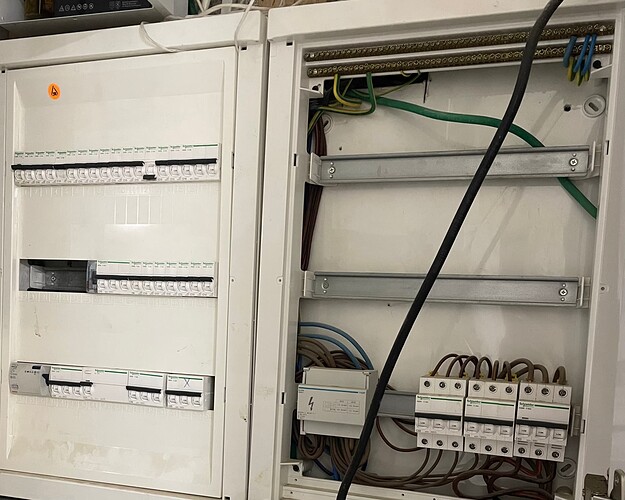 Gadgetman’s setup confuses me to, and it’s not clear where the wires are going. Hopefully you’ll find mine easier. The wires from the meter go to the black Henley box (not block). Wires then go to the main consumer unit for the house, and the little one for the stereo. The black cable coming from the little one is 10mm2 steel wall (not wired) armoured cable, which runs round the outside under the flowerbed. Note that the green and yellow earth wires go from the two consumer units direct to the meter (which is inside the big white box at the bottom) without being joined either at the house consumer unit or the Henley block. Getting the earthing right is critical. The little box below the main consumer unit is the transformer for the doorbell, in case it causes and confusion. 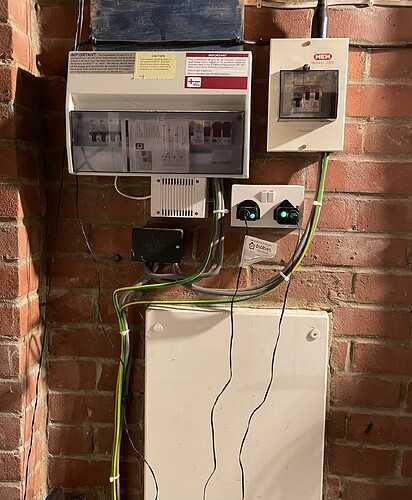 For reasons unknown I came down one morning recently to find the dedicated mains spur had tripped, so no HI-Fi. The GF ring was fine.
Went to the garage, unthinking, and pressed in the reset button. A flash and a bang with no injury to self or system.
With a 500 and multiple power supples all powered up as once not a surprise on reflection. Naim power supplies are pretty robust and the internal fuse on each one is a backstop.
So power off before resetting the spur breaker. Stay safe.

Wow, thats quite a big Consumer unit. My main one was only fitted a few weeks ago. It allows up to 18 circuits, but that is in contrast to the previous one which was full with 9 fuses. Many old houses in the UK will probably just have 4 or 5 fuses.

What country are you in?

BTW, the HiFi CU is the other white box to the right, so you can see the large cable from the Henley box coming in at the top. Again this was all fitted a coupe of weeks ago. The reason for adding a dedicated CU is again recommendation from Naim. It has also been confirmed by others on the Forum that it made a difference when they moved their dedicated circuit from the main CU to a dedicated CU 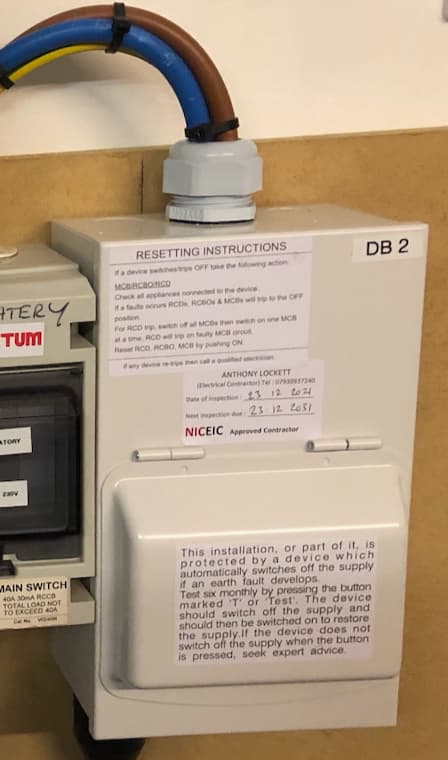 Hm, must check that. I did ensure that it goes straight back to the connector attached to the incoming mains cable, rather that the crummy earth block that other earth cables go to - so some bonus point there at least

Ok. Thank you both. It’s much clearer now.
I am from Israel (with UK roots

).
Maybe the safety regulations here are different but we have here 2 safety steps.

With your setups I don’t see how the dedicated CU is protected for #2. It looks like it only has overload protection.

Regs are different in different countries, so you really can’t make direct comparisons. The important thing is that the hifi supply is separated from the other stuff as much as possible, ensuring of course that the regs are followed to the letter.

Understand now. So previously, we (UK) would have an RCD in our CU which works the same way as you described. There would typically be one RCD that would cover all the Ring Mains circuits, so if it blew, all the Ring Mains circuits would go. The new standard is that each of the fuses now has this embedded and is called an RCBO. So there is effectively an RCD for each circuit, so if one blows, everything else is still working. Good idea, but of course it adds more cost. So an RCBO is an RCD with Overload protection. In addition there is a new UK recommendation that a surge protection is added. This can be seen as the brown fuse on my main CU, but for SQ reasons I did not put it on my HiFi CU.

Just for information: - as more and more cheap chargers get used (plus many other heating devices and fridges, etc), they can introduce DC Offset (possibly indicated by humming on Naim power supplies) . Now the old RCD’s were not designed for this and so may not trip at the same 30mA if there was a DC Offset. The latest RCD’s and RCBO’s resolve this.