Dedicated mains with Consumer Unit outside

I’m considering installing a dedicated mains radial for my system following the advise from multiple threads on this topic and the electrician today suggested to put the new HiFi dedicated Consumer Unit in the meter box outside as opposed to going through the wall with the split tails to the new CU inside the house and back out through the wall with the armoured cable and around the house to the dedicated socket ~33m run. My question is would the CU being outside in the meter box would affect the SQ or should I insist to install the CU inside the house?

Many thanks in advance

I’m not a sparky but would say if the CU is a waterproof outside jobby, then it could go in your external meter cupboard.
I would seriously doubt any negative impact on SQ.

No reason at all to expect a negative impact on SQ. My focus would be to ensure the new CU is suited to the inevitably damper air in an external meter cupboard, so as not to suffer from corrosion in the long term. A question for the electrician.

In my case, I did what you were going to do - split tails, and have CU on inside, then back out with SWA. My main concern I might have is space in the meter box outside. The meter itself has changed size over the years. Yes, often smaller, but who knows if the next variation might be shorter yet wider. It does also get quite dusty in there. Others here might know better if the high current flowing in the Main cable will effect SQ. Also if you need to turn off power to the house electrics, you will have to go to two places. That might be fine if you are doing it, but if a visitor does it, they wont know there are 2 CU’s, so that might be a risk. Personally I’d keep it inside.

Thank you all for the valuable input. I have decided to keep the CU inside the house despite being a bit of an extra work but would avoid any potential issues in the long term.

I’m sure either option would be fine. You might argue, hypothetically, that putting the dedicated consumer unit well away from the main house CU would be good for keeping things isolated, but I wouldn’t worry about it.
There are limitations under the regs regarding how far the consumer unit can be from the meter, and how the cables are routed, as the long meter tails are not mcb protected but any competent electrician should be able to address this.

That’s a very good point I didn’t consider since I was planning to put it right next to the existing CU which is a quite big having 20+ MCBs. I will make sure the new CU is some distance away from it at least say 0.5m.

I wouldn’t overthink things. Putting the dedicated CU inside sounds sensible. Split the tails close to the meter and make sure the earth for the new CU is connected at the incoming feed, rather than daisy chained off the existing CU. Works for me. 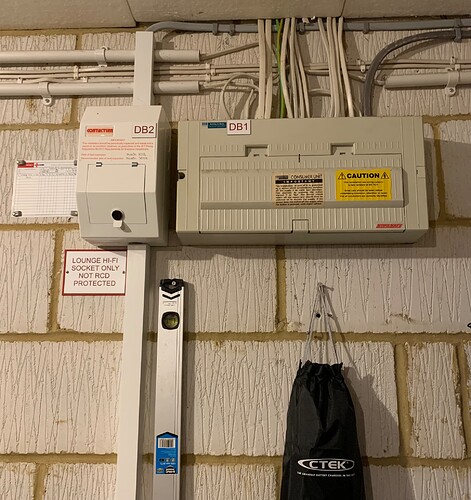 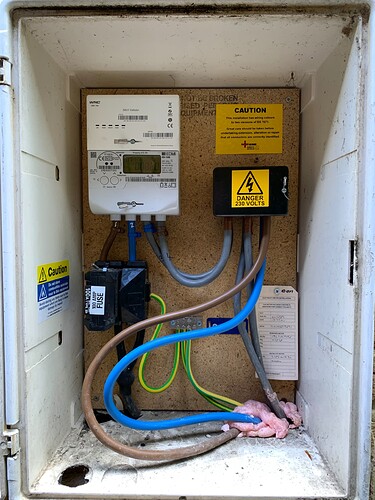 One thing you may wish to think about (and it’ll be interesting what others around here think?), is how many gangs (board circuit feeds) you need from the new hi-fi CU.

e.g. do you run a star-wired mains block off one primary feed, so all the kit ‘sees’ the same incoming feed (so nothing is effectively prioritised) or do you wire up the kit on separate gangs which, by my understanding, means that feeds are prioritised by their order on the CU’s bus-strip.

I run a single 10mm SWA (~35meters) to a double socket, then use a Mains block. in one socket, with the other free to give a little flexibility. I certainly wasn’t going to run several of these all around the house. But you will read of several examples from others around multiple runs, single/dbl sockets, 6/10mm. I went with what feels right to me following reading lots of posts and my physical complications of running cables.

In the end, anything is tonnes better than nothing

Thanks for the pictures James,

This is very much inline with what I had in mind. One thing I keep noticing is that with quite few installations people do not seem to use RCD as indicated on the label in your installation however on posts with more recent installations people seem to be using RCBO (instead of MCB) which I believe includes RCD protection. Could anyone elaborate please as to the pros and cons of using RCD protection or is this no longer optional due to the recent regulations requirements?

I’m planning to run single 10mm SWA (~35m) to a double socket. I currently only need 2 HiFi sockets anyhow so not an issue at the moment until I start adding more boxes which is something I’m trying to avoid at the moment since I don’t’ have space on my current rack (if I can call this a rack in the first place) unless I start piling up PSUs next to it but I rather avoid that. 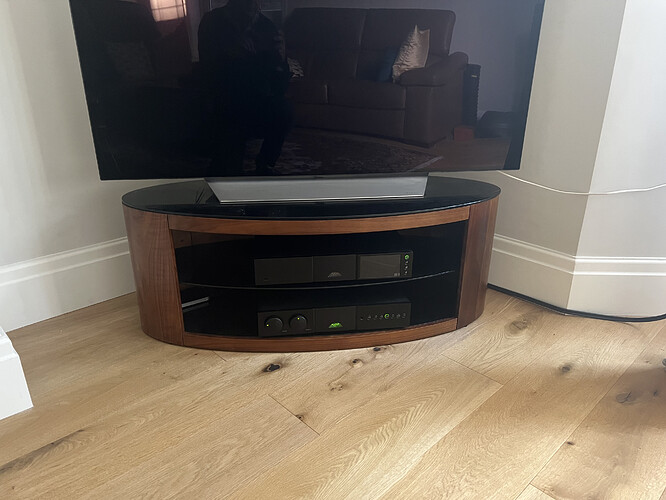 I had my installation done just before the 18th edition regs came into force which prohibited the use of non RCD protected circuits in a domestic environment. I’m sure there is little difference in the end result from a SQ perspective between either option, but the advice at the time was that it was better to go with non RCD. My electrician was happy to install this way (with a few stipulations – surface mount cable runs, labelling of sockets and DB board etc). Anyway a moot point now as this is not an option

I went with a single radial into a double un-switched socket as that’s all I needed. If I needed more in the future (doubtful) then I’d just add a Hydra arrangement. As you’ve already seen, lots of options depending on particular requirements. 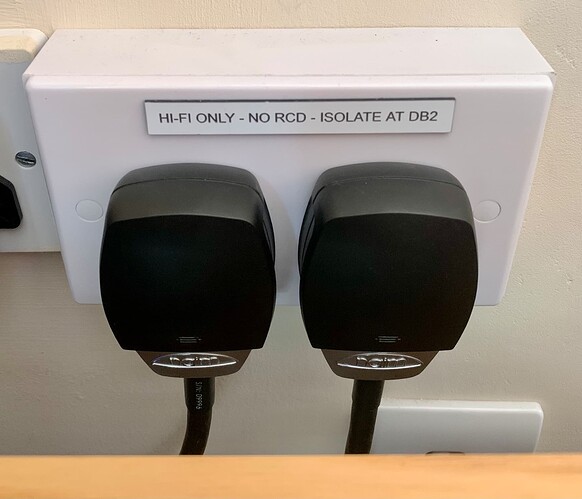 I have my meter outside and everything else inside in the garage. Meter tails to Henley Block which then splits out to primary CU for House and rings as well as two additional CU’s for AV/work purposes. Those are supplying specific ring and radial circuits for different purposes.
If you want to run in a split off the 100A supply and out to dedicated sockets then a radial circuit is preferable, whenever I’ve done it for HiFi, the sockets are all on the same radial rather than having separate radial circuits for each double gang socket.

If it was me having it done again I’d want it all inside in a dry location, it’ll be a bit more work for your Electrician but it’s your house and enjoyment at stake and it’s all possible to do internally.

I’m not a qualified Electrician, always consult with one and have them do the work and certify it for compliance and insurance purposes.

My CU is fitted with “C curve 32Amp 6kA 30mA RCBO” so MCB and RCD in one. One thing your electrician will mention is whether or not you want surge protection. It is currently recommended but not forced. This apparently can effect SQ, so I chose not to have it. There is enough space to add it if required. They take up 2 slots I believe

Do you have a dedicated hifi circuit, or are you thinking of getting one?

What do you have or are you planning to do with regard to ‘gangs’?

I am hoping to move house soon and will get one when that happens (a hifi circuit, that is, not a gang!).

Yes, I have (elements which can be spoken of around here):

Dedicated 6 gang (circuits) CU (MEM brand), which is fed ‘first’ from incoming supply (via Henley block). IIRC, I have 32amp fusing on the circuits, with board breaker of 100amps. These were largest ratings sparky could fit many years back.

The 6 are all 10mm cabled (cooker cable in general parlance). Fortunately, the CU is the other side of the wall to my living space and the wall where the natural place is for my kit.

Earthing has also been beefed up. All done by a sparks many year ago.

The 6 circuits feed 6 sockets as simple radials. AFAIK, it’s impossible to make a ‘ring circuit’ with 10mm cabling, as it’s too big for most terminals and a right bu**er to bend - it doesn’t!

The CU only has one bus bar inside it so, as best I know, it doesn’t star-feed the circuits, like a good quality mains box does. In theory, circuit 1 gets the best voltage etc, etc,.

An alternative is to run the separate CU with only say 2 circuits and then use a star-wired/ring-wired (supply & earthing) distribution box (not cheap), with adequate sockets for the kit. It seems some think this is the better way to go for performance. Earthing can still be improved (getting a sparky on this is essential nowadays).

Also beware things like surge protection, which is now instilled in to regs. The use of this is supposed to be risk-assessed by the sparky, the primary drivers being the exposure of kit in the house to surges e.g. laptops/PCs/games consoles, which can be bricked this way. AIU, the power companies are trying to avoid claims for damaging kit sensitive to surges, the moreso as energy security threats loom(?).

An alternative is to run the separate CU with only say 2 circuits and then use a star-wired/ring-wired (supply & earthing) distribution box (not cheap), with adequate sockets for the kit. It seems some think this is the better way to go for performance. Earthing can still be improved (getting a sparky on this is essential nowadays).

When Steve Hopkins was at Naim I quizzed him about this, and he said that based on trials when they were wiring up the demo room they were firmly in favour of a single 10mm circuit as they found it to sound better than multiple runs to individual sockets.
This of course makes the problem of providing multiple sockets more difficult, but a decent star wired setup at that end is still possible with the likes of Grahams Hydra, Powerigel, and various other mains blocks etc.

The oddity (to me) within the distribution box option is having more joints/connections in series, with the (obvious) mix of cabling types too.

I think some CUs have twin bus bars, which assists with voltage evenness.

Having had occasion to open the rear of a set of Focal speakers many years ago, I was shocked at the exceedingly thin internal cabling used, as against the much thicker speaker cabling feeding them.