We’ve moved house and I’m seeing an electrician tomorrow to ask about installing a dedicated mains circuit for the hifi.

But my problem is the vast, precipitous edifice of my ignorance which rises up in front of me.

I’ve found this excellent electrical diagram I believe shared by @james_n which is extremely helpful. I’ll print it out and show it to him as a votive offering.

But what words should flop out of my mouth when I speak to this electrician who, I fear, is going to think I’m a frothing maniac.

I’ve researched old threads but only managed to confuse myself. I do apologise for exhuming this old chestnut again. If I’ve overlooked a FAQ or similar I’ll happily take myself out back and issue forty of the best.

I’d be very grateful if wiser members could take pity and provide me with a paragraph of instructions to parrot at the poor chap tomorrow.

Yours in hope and shame. 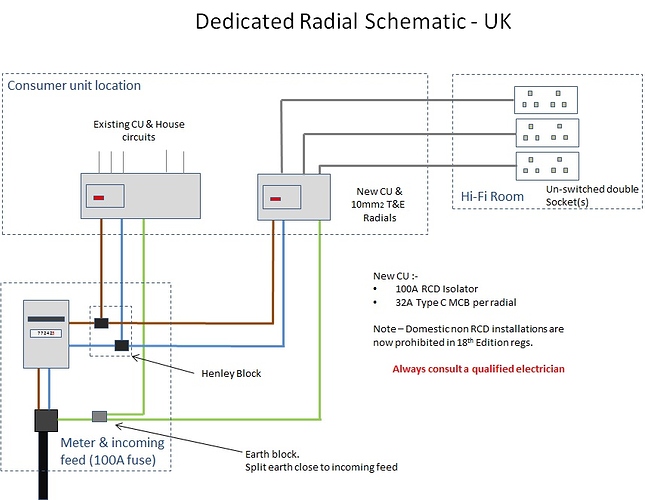 Show the electrician the circuit diagram, it’s all in there, nothing more to say.
He/she may complain about the 10mm cables, but that aside it’s very straightforward & nothing abnormal.

All looks good and straightforward. The 10mm cabling should be fine for the dual sockets (i.e. non-ring).

One thing - I think some here may prefer one radial connected to a distribution block which, in some cases, may give each piece of kit equal drawing rights on current. But, per another thread I’ve seen, it looks like some of the blocks run buss bars, which is the same as having a consumer unit with a buss bar.

Get the hi-fi circuit feed tapped off the Henley block first in order (if possible).

Thanks Mike. This sounds reassuringly un-mess-upable, even for a chap equipped with equipped with a quarter of an inch of brain like me.

I am having my spur put in tomorrow. Showed this very diagram to my electrician who just nodded and said “fine”. Reassuring to hear positive comments about the diagram. I am clueless when it comes these things, so very grateful to @james_n for his work.

My wife and I ran 3 x 10mm cable under the house, so we could be careful to keep well away from from pipes, other electrical cables and the Ethernet cables x 15 we installed a couple of years ago. Saved some cash as well.

Hope it was all worth the effort, and good luck with your electrician @Donkeyhaute

This is invigorating news! I’ll simply proffer up the diagram and sweat winningly if he asks any follow-up questions. My eyes will be glassy and darting about like a NASA monkey’s before it’s hurled into space.

Just to clarify, it’s a radial that you’re after, not a spur.

Also, for a Naim system, a single radial is (almost certainly) preferable.

Many thanks for your kind reply.

Yes, a radial, as per the diagram above. Mine will be identical to that diagram with three double unswitched sockets.

Just for my information, what is the difference between a radial and a spur?

I’m not an electrician, but, as far as I can see, the diagram shows multiple radials i.e. each double socket has its own run of cable - a single radial, AFAIK, is just one run of cable to all sockets… I think!

BTW, from the late JV (ignore references to spurs, he meant radial!)

with Naim one spur is much better.

*********wrote: “We use two separate spurs. Power amps get plugged in to one feed and power supplies in to another”.

This has been found by others (including us at Naim) to be a very poor idea - the whole system should be run from one spur.
The only exception to this is (maybe) plugging a lingo into a another spur due to its effect on the rest of the system.

Probably better to forget one of the spurs, use the other.

Again AFAIK, a spur is an extension to an existing circuit (from a socket, ring or radial); a radial is a direct connection from the consumer unit to the sockets (the same as a cooker, or electric shower would have).

Just for my information, what is the difference between a radial and a spur?

So to clarify further. I show that diagram to the electrician but insist that I need a single radial powering six sockets, a new CU and a Henley block. Is that correct?
Are there any complications with grade II listed houses does anyone know?

I would and do use multiple radials as I found it sounded better. If you have all 3 installed then you can easily revert to using just one if you find it better, but I’m sure you won’t.

Is there a cost implication to installing multiple radials versus a single one? I assume I’d need extra materials and man hours?

So to clarify further. I show that diagram to the electrician but insist that I need a single radial powering six sockets, a new CU and a Henley block. Is that correct?
Are there any complications with grade II listed houses does anyone know?

My (non-electrician) view is that your original diagram will fit the bill well, as the earth from the radials is brought back to a single reference (which was my understanding of Julian’s objections to multiple radials). I have tried single versus multiple radials using a Musicworks block, and the multiples win out easily.

The only change I’d make is to run the radials into individual sockets rather than doubles.

I moved house last year and had 7 10mm radials installed (cue LOUD whingeing from the electrician), so all my HiFi gear is routed back to a single consumer unit and a single earth reference. I also specified terminating in 15 amp round pin sockets meaning I could get away with using unfused plugs, the only drawback being I’m limited to which fancy power cables I can use (i.e. they need to be round three pin compatible) .

Fortunately I’m not there yet (Chord would supply them) as the system sounds amazing (though it does burn in for a while).

Is there a cost implication to installing multiple radials versus a single one? I assume I’d need extra materials and man hours?

It will cost more but shouldn’t be much more as the floor boards etc are already up for the radial/radials anyway. I use a single radial for each piece of kit as Nick mentions above. Ive also star wired mine at the sockets, connected to an extra 10mm earth cable run back to the consumer unit.

Also forgot to mention, if using UK 13a sockets then the mk logic range un switched ones are best. Every little helps