Contemplating picking up a ND5XS2 streamer but I really want to have time to kick the tires around with the iOS app for streaming from Tidal/Quboz. I just returned a Lumin U2 mini because I couldn’t get over how poorly designed the app was. So lesson learned - looking to find a way to demo or maybe someone has some detailed screenshots of the Tidal integration?

Basic example of what I mean - if I had an album open in those apps I could click on an artist name, and it would show me other artists similar or I could read the bio, or add one of the newly discovered albums to my Tidal favorites to play it later. The Lumin app had just none of that. Curious if Naim app does these things or not. Hoping to have a way to put the app into a ‘demo’ mode to kick the tires - is this a thing?

I use my Naim app with a Tidal subscription, and yes, it does show similar artists. Very useful indeed - just scroll down the artists albums to see Similar 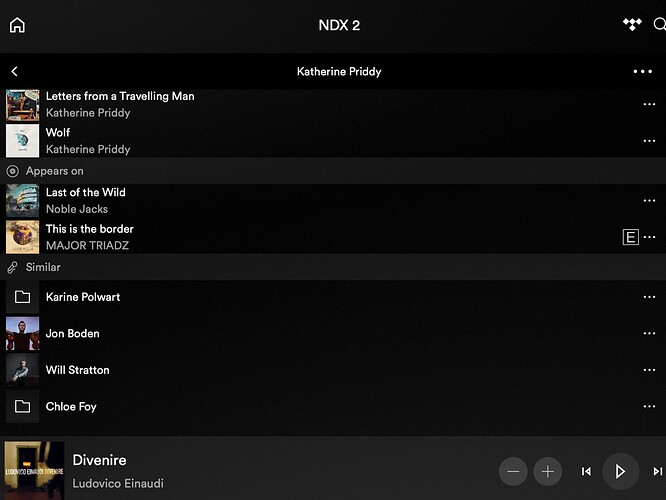 Nice! That’s super helpful - is it also possible to add to Tidal favorites?

You can also use the Tidal app on the same device and browse that way. Anything you like and mark as a favourite appears a few moments later in the Naim app. I fixed the search function in the native Tidal app a bit better.

Yeah I was trying to get away from having to use 2 different apps for finding new music while listening.

Oh other question I had was about gapless playback - does this work right via the Naim app? Ie - no pause between tracks when say playing a live music album?

As far a I know, the app doesn’t play the music, it just dictates what the streamer does, so assuming the music is ripped ok then there will be no gaps added to tracks. This is an absolute deal breaker for me and I can’t believe some manufacturers can release an app that adds gaps to tracks.

Awesome! Ok I just bought one - should have it in a week or so. Thanks for the help.