I have an Atom HE, an Apple TV box and a Samsung TV, all three are connected to the router by Ethernet. The Atom sits below the TV and I’m listening about 2 metres away. I use Qobuz to stream music.

Previously, I used an Apple TV box to a Panasonic TV and played music to my Mu-So gen 1, via the Spotify app on the Apple TV and I could have the album art displayed on my TV screen.

The Apple TV doesn’t have a Qobuz app, is there any work around to display album art on the Samsung TV in the first instance above?

I use Android and have a Chromecast dongle attached to the TV. The TV is connected by optical to the NDX2. If I use the Qobuz app on the phone/tablet and chromecast from the app to the TV (via the dongle), the album art and tracklist is displayed on the TV, and the sound comes from the TV via the optical to the NDX2.

So this works but obviously with a bunch of compromises. Though sound is good enough for party type situations.

The only other option I am aware of, and without the compromises, is using Roon, which can use the Chromecast dongle (or a browser built into the TV) to display art.

If there is an alternative in the Apple ecosystem, I would not know

Thank you for your reply. I’m Apple every where, Mac Book Pro, iPad and iPhone.
Regards

A while ago just as an experiment I installed the Naim app on an Amazon Fire TV stick and it worked surprisingly well. I didn’t test the full functionality of the app but everything I did try worked fine

Following the above, you can play Qobuz on iPhone (maybe also Mac) and AirPlay to the AppletTV.
This should show the art displayed on the TV and play through TV to the Atom.
No playlists or fancy stuff, just art, title, artist, like would be shown on the Arom display if directly AirPlay‘ing to it.

I’m not sure of your use case, but it may do, what you want.

(With couple of drawbacks: quality is reduced to 44/16 at best, including conversion though 48kHz AppleTV output, additional power consumption on playing phone, power consumption of TV, … - for audio quality playing directly Qobuz through Atom will be mich better. But if the screen is important.)

Ah, while playing with my equipment here: ihr be you also need to disable the screen saver on AppleTV. (Which stopped display of artwork.)

PS: it takes a bi, before my AppleTV shows the artwork, likely waiting for normal use of the menu, before switching to artwork from AirPlay.

I’ve tried Apple Music that works with airplay, I can have the album art displayed but as you say it’s a lower quality. I don’t subscribe to Apple Music, I want it all, HiRes and album art on the TV. Eventually it may come, if Naim and Apple get together or Spotify finally presents us with HiRes.
Thank you 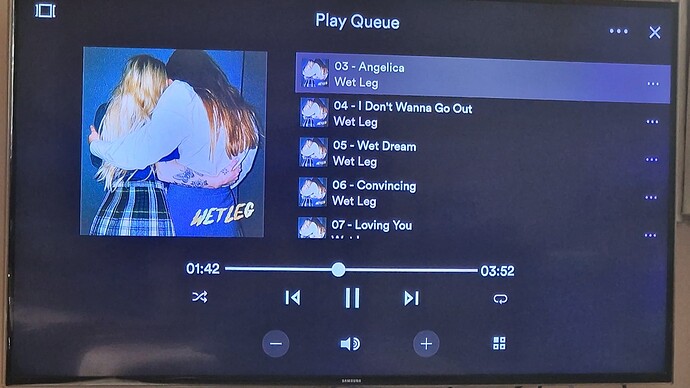 I use an iPad to control my Naim kit and I can swipe down on the iPad screen and use screen mirroring to connect to either one of my Apple TV devices that are in turn connected to a Samsung TV.

Thank you, tried it and works for me too

. I appreciate that a lot.

Wouldn’t take much to port the Naim app to the AppleTV, same code just need to deal with the differnet screen sizes.

Expecting to get shot down in flames, like the last time I mentioned it

(I’d prefer a mini control similar to the widget for the Apple Watch first.

But that might actually be a bit of work.)

“Too Late Now” has one of the best lyrics to any song in it.