@Xanthe I have been reading through a thread you started last year. Linked below.

In it, you ruled out damping solutions:

So, how to mechanically isolate the ‘Brain’ components.

First: rule out solutions based on damping, such as sorbathane.

I am interested to understand why. I’m working on a unit to build myself using oak for shelves with 8mm toughened glass. I was thinking to mount these glass shelves on sorbothane strips, using an online calculator to figure out the appropriate dimensions.

Then I read your post. What led you to choose a hard point solution over damping?

I can’t accommodate a Brain / Brawn stack arrangement so the system has to cope with the vibrational harmonics of the transformers transmitted from lower on the rack. So, how to mechanically isolate the ‘Brain’ components. First: rule out solutions based on damping, such as sorbathane. Second: rule out spring systems as; 1, they’re more difficult to design and build; 2 some of the boxed have vary asymmetric weight distributions. So, think about using the properties of systems based on dissim…

It’s from an observation made by myself and a lot of other people, that if you include a significant amount of damping close to the electronics handling the music signal, this causes an audible effect in the signal that is akin to a damping in the signal. This seems to lead to a perceived reduction in dynamic and tonal contrast. It was to avoid this effect that ruled out damping after experimenting with a sorbathane solution, which always resulted in what appeared to me to be degree of “dullness” being created in the system.

These are just my observations (although others have expressed similar opinions on the use of damping in equipment support), so a sorbathane system may still work for you. I can’t rule it out as the right solution for you, for your equipment, and the way you listen to music.

I agree that sorbothane and similar materials are mostly a poor choice for most audio applications, because they have hysteresis and are not at all linear. The issue at hand is that vibration of equipment, components, wires and signal connections can affect the electrical signal which carries the music. A stated objective is usually to isolate or minimize vibration to minimize these deleterious effects. Vibration is generated from the loudspeakers, especially via acoustic energy, and is potentially correlated with the music signal; but can also can originate from equipment including power supply transformers, or from external sources, where it is uncorrelated with the music signal.

I would just add that using solid hardwood for shelves is probably not ideal. (Look at what commercial hifi racks are made from, not to mention speakers ). Composite materials have better dimensional stability, and I suspect better acoustic properties generally. Of all timber to choose, oak is likely to be one of the worst as it’s particularly heavy, and higher mass means more stored energy.

Great timing for this topic as I will be looking at what I do with my set up some point in the near future - either try to build myself or buy…
Any further advice, suggestions or ideas much appreciated

Thanks, that’s very helpful. In that case, I’ll go for a metal point solution instead. I might try fixing nuts in the shelf into which a pointed bolt can be screwed (like an upside down speaker spike).

In the compromise between cost and benefit, I’m going for 8mm shelves only because I picked up a set of ten for $20. To have six 10mm toughened glass shelves made was quoted at $600. Ouch.

Of all timber to choose, oak is likely to be one of the worst as it’s particularly heavy, and higher mass means more stored energy.

I don’t have experience in this so I’ll probably ask some uninformed questions.

If high density materials are bad, why use glass shelves? Glass is much heavier than oak for example.

Note: I’m not seeking to replicate a Fraim. I respect the work that has gone into researching the best materials for audio, but I’m after a different aesthetic result.

So, in my opinion, non-linear materials such as sorbothane should not be used to isolate or reduce vibration which is correlated with the music signal

This makes me wonder why the feet on each Naim box have a soft surface. Why not fit points and supply Fraim chips to site them on?

Thanks, I am very grateful for the depth of knowledge on this forum.

Here is the design as it stands so far. My brief, so to speak, is:

I know that two isolated shelf units would be better. But I don’t want to take the Fraim route. 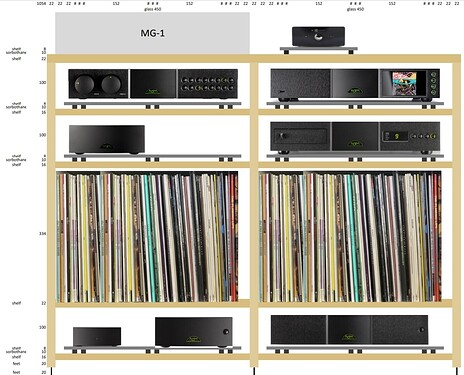 My preamp has hard feet, but thefeet under its power supply have a thin damping layer - not sorbothane, but an elastomeric o-ring inserted in a macined circular groove with just a tiny bit of it resting on the glass shelf. So brains are hard-mounts, but box with transformer has thin damping layer.

I hasten to add: in choosing materials or hard-vs-soft, I encourage experimenting. Go with what sounds the best.

Ach it’s ok, I’d rather just choose one and go with it! Easier to build it once and then get on with enjoying the music. I’m happy to benefit from the experimentation you, @Xanthe and others have carried out and cherry pick the bits that suit my aesthetic

I would very much recommend silicon nitride (or another high rigidity ceramic) to interface with the glass rather than steel (particularly stainless steel) as the sound velocity difference between steel and glass is less and hence you don’t achieve the same degree of sound isolation. If you really must go with steel, then I’d strongly recommend using ball bearings made from a through hardened bearing steel.

How do you intend to mount the nuts into the self without the interface becoming flexible and non-linear (i.e. not strictly obeying Hook’s law) due to the inherent flexibility of the wood, exacerbated by the low contact area.

Mmm interesting thanks - this is great! I’d forgotten you used silicon nitride balls on brass. So that seems the right path to take.

Aesthetically, I’d like the brass to be flush with the wooden shelf. Taking your point about mounting the surface on which the ball sits… I could drill a flat recess using a forstner bit, that a brass puck sits in with a snug fit. I’d press a concave surface into the puck per your notes. Do you think this would be any compromise over sitting the brass puck on the surface?

Another comment you made regarding what happens to the energy:

It’s not constrained layer damping as there’s very little loss in the system. Instead, the energy is reflected back to the source; and importantly, as there’s so little potential for storage of energy, the reflection is virtually instant (rather than delayed as it would be if the ball was heavier, such as a larger steel ball). In this way very little of the higher frequency energy is transmitted across the isolater system.

Does this reflected energy have an impact on the isolated piece of equipment, or does it kind of cancel itself out. That is, if the reflection is virtually instant does it work a bit like an XLR lead, or does it have the effect of doubling the vibration by adding to it?

Design updated to use balls instead: 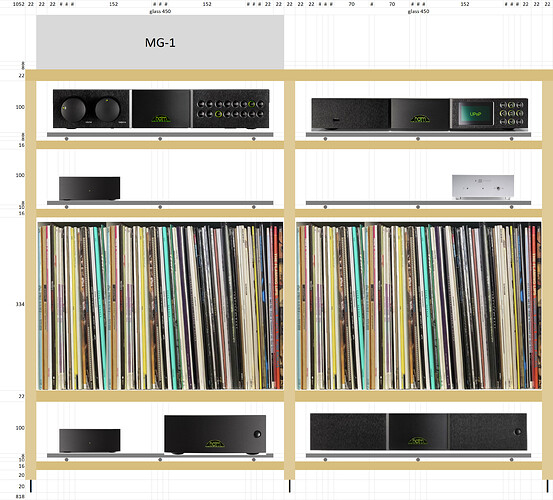 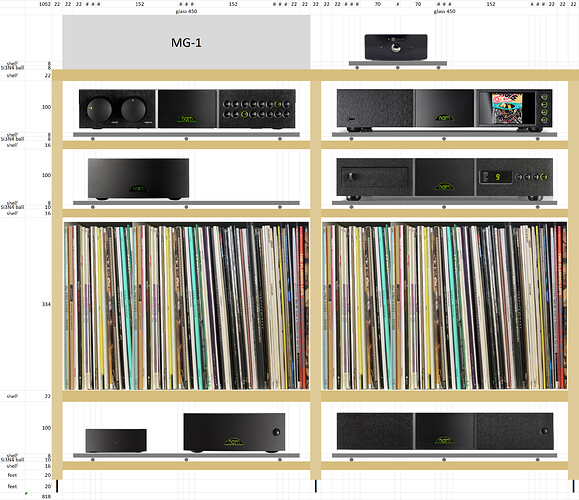 Interesting thread, thanks.
Ivor Tiefenbrun, many many years ago, recommended that the Linn Sondek should be placed on a ‘light, rigid coffee table’. I don’t know enough of physics to comment on the storage of energy, but I have a personal experience to share.
A friend of mine uses a rack made by Guizu: 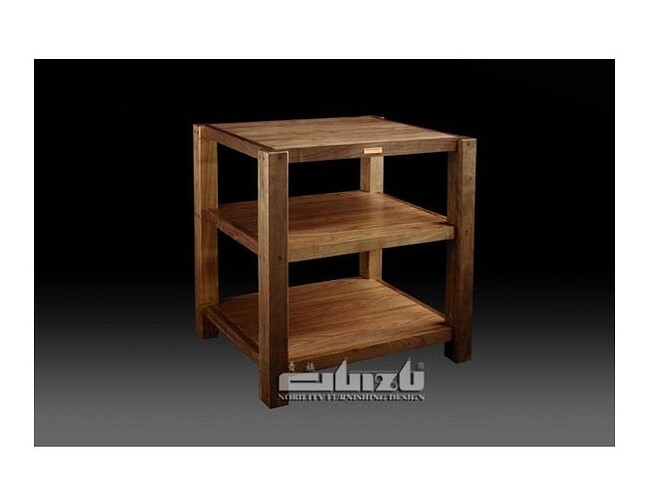 whose shelves have a special inner structure: 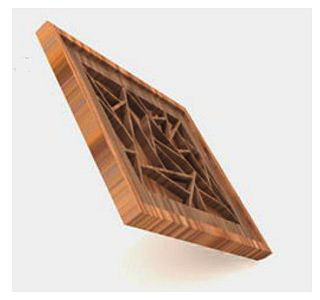 He then kept a rega Apollo CD player on a 10mm, shatterproof glass slab decoupled from the wood. The CDP skipped a few bits in two points on a certain song; it did it repeatedly on the same song, same points. I suggested that we removed the glass and put the CDP directly on the wooden shelf: the skipping disappeared immediately and the track was replayed smoothly - this second test also repeated.

Perhaps a good choice for wood is this

where the wood grain is 90° shifted each layer, reducing resonances.

I suggested that we removed the glass and put the CDP directly on the wooden shelf: the skipping disappeared immediately and the track was replayed smoothly - this second test also repeated.

Interesting. Did you happen to put it back on the glass and did the skipping return?

Part 1: Seating the brass cup into a depression in the wood may actually improve the coupling of the brass to the wood, particularly if it’s seated in a bed of a rigid (rather than elastomeric) glue. Using a wood specific glue (such as a casein resin or urea formaldehyde resin) will allow a perfect fit into the recess while allowing the brass to be removed if necessary.

Looking at the glass / equipment side, the reflection from the ball back to the glass is near instant (at least an order of magnitude faster than any component in an audio signal), so has much less effect because there is no loss angle and hence no phase change. Audio components should be designed to deal with their own vibrations without additional sound degradation (this is certainly the case for Naim components).

@JimDog has the “Xanthe” shelves.
I hope you are well Jim. Not heard of you since a time.
How do you appreciate these shelves?