Djokovic - sinner or sinned against?

Anyone have any views on this? I thought Rafael Nadal had it right when he said that ‘decisions have consequences’ implying that Djoko only has himself to blame by declining the vaccine…

My view is that this is going to be far too close to a political discussion to survive long on the forum under current AUP.

Anyone want to start a sweep on how long this thread lasts?

Obviously I do not have all the facts, but some things in life are clear cut.

Djoko only has himself to blame by declining the vaccine…

100% agree, if you want to participate in the human race - vaccinate. 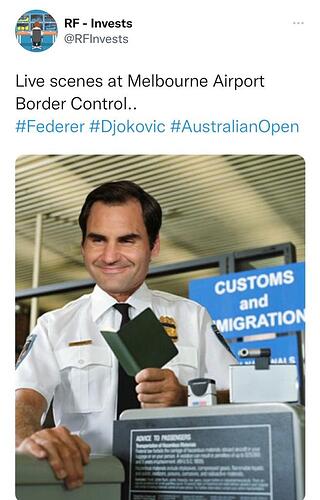 Seems pretty straightforward. Either he has a medical exemption , or he doesn’t.

The argument (on R2 right now) is that he complied with the rules as written before leaving Dubai for Oz, and that as a result of the uproar there - likened to the anger here over certain parties in lockdown - the rules have changed to bar him. That seems to be the crux of it.

Fwiw I reckon he’s a berk and should accept that if he wants to sidestep things that’s his choice but he must accept the inevitable consequences.

I used to Like him but recently he’s got a bit to much full of himself.
Even if he’s no 1 you can’t treat him any different from anybody else , either he’s jabbed or not.
I have a cousin who didn’t see his family including a newborn granddaughter for nearly two years because of restrictions between sth Australia and Victoria.

This one is far too wrapped up in politics. Thread closed.