Does anybody have the wish to downsize their system and why?

I have been on the Naim route since the 1990s, I started off with a Nait, CD player, that moved to Nait plus Flatcap, then to Nait plus Flatcap plus a matching power amp (number forgotten) . Since then (thanks to a burglary) the system has been revamped. All in all, I now have five boxes for the amplification. I have a turntable, a blu ray player, a satellite dish and a wonderful Magnum Dynalab tuner. I dread ever getting round the back to connect it all.

Bowel surgery meant that my PMC FB1’s could not be moved, so they were replaced by Harbeth P3ESR (lovely delicate sound) . As I get older am I the only one who thinks it could be a whole lot simpler?

My current system is CDX2, Magnum Dynalab ) MD102T, Michell Syncrodec, 200/202 plus phono stage plus HiCap plus the other dinky little box, plus Okyno Blu Ray plus satellite dish (which gives access to certain radio channels not available via the VHF only Magnum Dynalab)

Surely there is a better way? 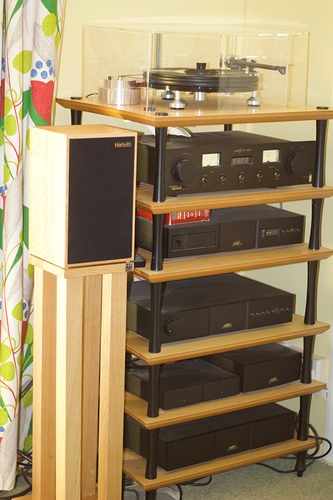 Well to answer the thread question.

If i could start all over again, I would love to search out something like the gryphon (120) integrated but I’m in too deep - too many black/green boxes (including previous iterations sitting in the attic). Also, disabled after back surgery means wiring or even moving pieces is a major dilemna. I was lucky enough to find harbeth 30.1/ almost new and the seller was close enough that he came and set them up - that was a “deaf” purchase as i hadn’t auditioned them but they work very well. The problem is, who is going to first system something as rare as a pricey integrated?

Downsize, or downvalue? The two are not necessarily the same…

If I had to downsize, the first step would be to lose the tri-amping and go for active speakers (if I can find ones I like that are smaller shame PMC doesn’t do active Fact 12s!). That way no big amp stack and triple speaker wires, which are a complexity if anything happened to me and someone else inherited the system.

Not sure if it qualifies as a desire to downsize. But I’d love a much bigger home so that I could move the main 3 rack system into another room away from the kids for a few years (and still use it) while putting something in the living that was essentially 3 boxes in a cupboard with wall mount speakers.

Never gonna hapoen though. I don’t have the room and my (second) pair of PMC Twenty5.23 is all but written off with scrapes and dings.

I have not thought of downsizing myself but I have thought of ways to get the 500 series sound without all the boxes. We have gotten so many compliments on the new-to-us ProAc K6 speakers, that I have been looking for a smart way to recommend a path to them from a humbler set up.

This is an interesting thread and I think is a stage of life thing too. My parents disposed of their Technics rack system and moved to a Tivoli system which while not strictly hifi does give them CD, radio, DAB through small speakers and a sub. It’s a very neat and surprisingly musical little setup for their retirement flat. My Dad and I also adored the wonderfully weighted tuner dial too.

Thinking in terms of something a little higher end though I guess a superb system would be something like:

I too have been pondering ditching all the Naim amp boxes and their associated power supplies for active speakers but it is hard to move away from Naim when they have been amplifying my system for 32 years and I love their sound.

I’m not sure about a better way, but there is certainly another way. You could for example swap the 202, napsc and 200 for a Supernait. You could rip your CDs and swap the CDX2, 202, Hicap, napsc and tuner for a 272 with FM module. The options are many and varied.

So I’d say just do what feels right. There is something lovely about having just one box, but they just don’t sound as good. Maybe that no longer matters, or maybe it does.

Whatever you do, put the napsc on the floor beneath the rack and put the Stageline as far from the Hicap as possible on their shared shelf. Not only will it sound better it will be like getting shot of a box.

Thanks Jonathan , some real thought there. I guess the thread is also about , how we build up the system and what happens when we stop.
I think if I went down that route (and heresy warning) I would get the top of the range Pioneer Universal player and use the DAC on the 272 . I think many of us use our stereo system to utilise the sound from the TV and with that route I would remove 2 boxes, the Blu Ray player and the CD player. However what is not shown is the boxes under the TV.
My comment would be fantastic sound, but way too many boxes.

I haven’t had this urge Ian.

When Naim started, they believed that separate boxes with emphasis on power supplies was the way to go for good audio. I think they still do.

Then fashion raised its head, and one box sets were released. Naim did too to meet the needs of the market. Do you want one?! That seems to be the gist of what your post is about…

Yes, I did buy into it, but looking at my system now, I think it is too complicated , especially if I pass it on to someone.
Just because something was right then does not set it in concrete now.
As I get older I want to retain most of the sound but not all of the boxes .

Yes I downsized from Pre/Pwr+PSU’s, FM tuner, CDP & TT over to Supernait, CDX2 & NAT (& a few PSU’s have sneaked in) .
Next is a house move & then I plan to go to a high end streamer-preamp combo & active speakers.

One of the Unity boxes then. You could keep your Stageline and HC for your record player.

I’ve upsized to a NDX2 and SN2 with a Core in another room. Seems pretty good and I don’t want a tower of trouble and cost! 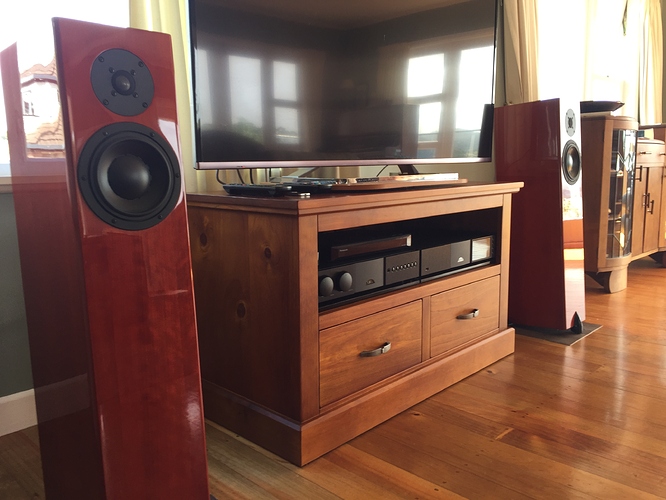 Ah, hitting the nail on the head, keeping the quality but losing the boxes.

A supernait 2 looks the obvoius solution getting rid of the PSC,202 and 200 and maybe the hicap but only an audition will give you a taste of it. I was unconvinced by the original supernait against 202/PSC/200 when I first looked into replacing my Rega amps with Naim but there were plenty of people who bought one and the 2 is reckoned by most (but not all) to be an improvement. Going outside of Naim it will be a matter of finding something that will wake up the Harbeths and again you’ll need to audition, or if you go the second hand route be prepared for a lot of trading which from your post is probably not an option.
The best bet, if you have one in range, is to get a dealer involved, someone who trades used Naim and is prepared to loan you a SN2 to demo, if you’re lucky he might even install it. He will of course take his cut from any deal but it can save a lot of mucking about.
You might even try a new Nova which opens up the world of streaming with surprisingly musical results but it will digitise its analog input and you will need to keep the hicap for the stageline.

Simply there is another way - lots of them - but whether better is a matter of subjective judgement.

As HH says do what feels right.

i use my nova with a rega p3 and the simple rega fono mini and at that level its hard to fault the ADC in the nova. Vinyl still sounds as it should

I would agree with what HH said. In my limited experience (with the Nait XS, 202-200 and 282-250), with Naim the separates sound better than the integrated. I don’t have experience with the Supernait 1 or 2 but the Nait XS sounds mediocre in my experience, not very special, sorry. I once compared the Nait XS and Rega Elicit Mk2 in my system and switching back and forth between the two there was very little between them. In other words the sound quality is very similar. There are some integrateds that will give you an instant Wow factor when the amps are switched. A stark difference.

If you plan to downsize the amps with your Harbeth P3ESR, I would suggest looking at the Sonneteer Orton and LFD Zero mk IV or V apart from the Supernait 2. The Harbeth does not sound spectacular driven by the Nait XS. The 202/200’s increased level of speed, separation and detail matches the full-sounding Harbeth a lot better than the Nait XS, in my opinion. The Supernait may be a competent amp but I would tread carefully.

I’m not convinced that separates always sound better than integrateds. I once spent a whole Christmas holiday with a 202, 200, SN1, Hcap, & NAPSC lent by my dealer comparing every possible combination. In the end I went for the SN1/HiCap over the similarly priced 202/200/Hcap. Others preferred the separates but several other posters shared my preference. A 282/250 is a completely different kettle of fish, of course as it ought to be given the price difference.