Does anyone here really dig SACD?

Ever since acquiring a decent universal player last year (Oppo UDP 205), which has the ability to send the DSD signal straight to analogue, I’ve really been getting into SACD as a format.

I only have a small collection - Floyd, Can, Goldfrapp, Roger Waters, some jazz and classical - but am always looking for new ones. If anyone can recommend any outstanding ones, especially classical and jazz, I’d be most interested.

I don’t know what it is, but they definitely sound better than redbook CDs and also many hi-res files I have… they have an almost “analogue” quality about, them, as they seem to lack the usual digital “glassiness” or “harshness” - but maybe I’ve been lucky and have just bought good ones.

What do other forumites think of this format (or of DSD more generally)?

It’s worth visiting Channel Classics website. They issue many excellent classical recordings, often in multi-format, CD, SACD, DSD in various levels, high res FLAC etc. Rachel Podger and Ivan Fischer record on this label, amongst others.
I have DSD recordings of Vivaldi’s Four Seasons from Podger, and an excellent Wagner disc from Ivan Fischer, both downloaded from this site.

MFSL have released several of Miles Davis’ better known albums on SACD including Kind of Blue, Bitches Brew and Sketches of Spain.

If you like Holly Cole her Tom Waits collection “Temptation” as well as “Don’t Smoke in Bed” are available on SACD as is Analog Productions series for Nora Jones.

Does anyone know why Naim never supported SACD? They support HDCD of which I own a few but I only know that when it shows the symbol on the CD player!

I do like SACD. I almost never buy CDs anymore, only SACDs (or hires downloads of course.) There are a number of classical SACDs available, some minor classical labels like BIS, Channel Classics, Pentatone still release new ones. Re-issues of albums from the major classical labels on SACD are often extremely expensive, but sometimes the only way to to get a hires version of a favourite classical CD. For rock/pop, SACD seems to be essentially dead.

SACDs are difficult to find in shops. Most shops only have a few and they are mostly hidden among the ordinary CDs. So my starting point for SACDs usually is online: https://www.hraudio.net lists most of them and has links to several Amazon sites, JPC et.al. Comparing prices often helps, especially for expensive re-issues.

The only brush I’ve had with DSD was via a Sony D100 PCM recorder. This unit has the ability to record up to 24/192 PCM and also the lower rate of DSD.

I was recording an LP that was impossible to find digitally. After having made a PCM 24/192 copy, out of curiosity I thought I’d try out the DSD option. I was very surprised that the DSD even at the lower rate, sounded significantly more musical, as you say more analogue, and the bass lines seemed stronger and better defined. All in all better. However, as I haven’t found an easy way to edit these files, I’ve stuck with PCM for convenience.

Kevin, i too have a handful of SACD’s ,but they are hybrids, as I only have my Cd5X to play them on.Even so, I feel they have the sound attributes that you mentioned and I can hear the difference versus the regular red book cd.I have to say at this point I am also a fan of SHMCd’s ,but we can only listen with our own ears, and I feel both formats are an upgrade in sound .
I would recommend SACD’s from Audio Fidelity that are mastered by Steve Hoffman from THE original tapes master tapes.These discs have the most amazing dynamic range and are very crankable.Also they may feature slightly different versions of tracks to the normal release ,which can make them collectable.I see you want recommendations and I would be happy to do so ,however my titles are mostly rock/pop but I can list them if you wish
Alan

Kev, I think most of Chandos Classical releases are dual layer CD/SACD . Worth checking those out as lots of good stuff in their catalogue.

Unfortunately, bar a decent flow in 2001/2002, the availability is very scarce now for pop/rock.
For example the asking price on Amazon Marketplace for Floyd’s WYWY is over 140 euro.
I have a handful of heseincluding the above plus The Doors, Cat Stevens, N. Drake, M. Oldfield and Duran. Today is already difficult to build a collection on cds, let alone Sacds.

Last week a bought a Pioneer universal player, basically for DVDs, just to alleviate the stress on my DVD5 s (a Naim dealer told me to use them like a classic car). I still have to test it on
my systems but being used with Naim build quality, the pressed upper panel of cabinet with those side screws is not a nice thing.
I prefered another Panasonic player in the same price bracket (1000 euro) but it was not availble in the shop and doesn’t play SACD. 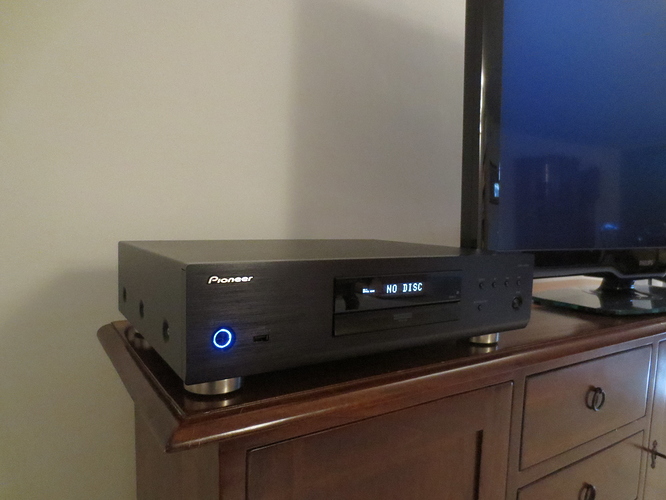 Naim did do some work on SACD, even doing some work with players and parts from Philips. However, at the time, DVD-Audio was a competing format and in many respects Naim favoured hi res PCM over DSD, so the DVD5 DVD-Audio player was born and work on SACD abandoned.

HDCD support came about more by accident than design, when Naim started using the Pacific Microsonics PDM-100 oversampling filter. This was chosen because of its excellent performance with redbook CD rather than its HDCD capability. The replacement PDM-200 was better still and has been used in Naim products right up to the CD555.

Personally, I have had a few SACD players, initially to hedge my bets against competing formats, and latterly just because it came with that capability along with CD replay, DVD-Audio etc…

The first time I made a comparison between SACD and CD was with the Rolling Stones SACDs released around 2002. I had a Sony SACD player and compared the SACD layer played back through the Sony against the CD layer played back through a Naim CD5/FC2. The CD5/FC2 was way more engaging to my ears. Of course, much could be down to the Sony player itself, but IIRC it had a high reputation for the quality for its SACD performance, so felt it was fairly representative, even though it was less expensive to buy than the Naim.

Pacific Microsonics a name from the past, widely heralded in the recording industry…then consumed by Microsoft never to be heard again, shame.

I think the founders of Pacific Microsonics went on to start Berkeley Audio design.

Unfortunately, bar a decent flow in 2001/2002, the availability is very scarce now for pop/rock.
For example the asking price on Amazon Marketplace for Floyd’s WYWY is over 140 euro.

FYI…you can pick up the re-issue of WYWH for approx. £37 at the moment, still not cheap but a bargain compared to the Marketplace!

I own a ton of SACD’s and think they sound wonderful, however, I will admit that with the right transport and DAC, redbook CD’s have closed the gap. I use a PS Audio Memory Transport connected to a PS Audio DirectStream DAC via an I2S (HDMI) connection. This allows the DSD signal to run from the transport to the DAC without downgrading to PCM. Most SACD player/external DAC combos will only allow the PCM layer of a hybrid SACD to play. The PS Audio combo is quite special in that regard plus does a fine job with redbook CD’s as well. If I wasn’t a Classical collector I’m not so sure I would embrace the format…

For those interested, provided you have a suitable BluRay/DVD player there’s now a very easy way to rip the DSD tracks from SACDs. I’ll be told off for linking to this, but if you Google Hifi Haven & look in their digital section you’ll find the instructions.

There’s no doubt that the DSD rips sound better than their, presumably, identical mixes on dual-layer discs but what is less certain is how they might compare to alternative masterings and remixes.

Interesting. Thank you for that.

…but am always looking for new ones. If anyone can recommend any outstanding ones, especially classical and jazz, I’d be most interested.

if you like the viola da gamba sound (?)
and appreciate pre/early baroque, renaissance, early worldly music, you should explore Jordi Savall’s collection on Alia Vox label. Most of them are SACDs, and hybrid type so no problems playing on naim audio CD players. Musically they do vary to taste but the sonic quality is consistently superb.

I read somewhere that the reason SACDs usually sound good is because they’re benefited from expert recording engineering that has been sympathetically thought out, and time paid to perfect studio acoustics, etc, and the SACD credential gimmick is neither here nor there. I’m not sure myself.

But i do adore my Jordi Savall collection, which just happen to be SACDs mainly.
My forever growing Alia Vox collection has pride of place in a cubbyhole of the posh front room sideboard 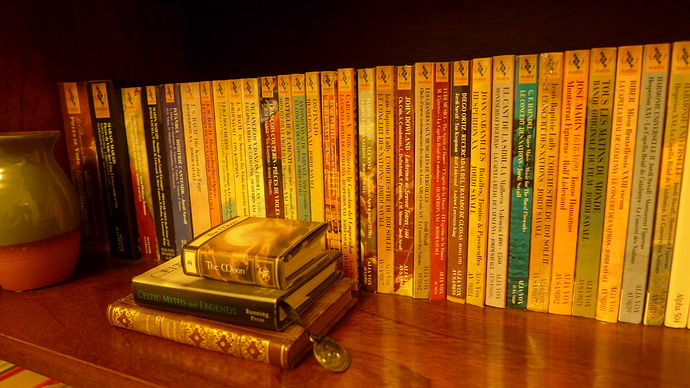 Hi @Debs - I have a dozen or so Alia Vox/Savall SACDs (Marin Marais, Couperin, Handel, Bach, Monteverdi, Dowland etc) and I agree that the performances on and SQ of these releases is exemplary.

What are your particular favourites or recommendations? Always keen to expand my collection (and horizons).

Kev, sounds like you’ve already sussed out your pick of the bunch! : )

I stress this is subjective with one’s own musical taste but my highly recommended top dozen Jordi Saville CDs from off my shelve- pic below : 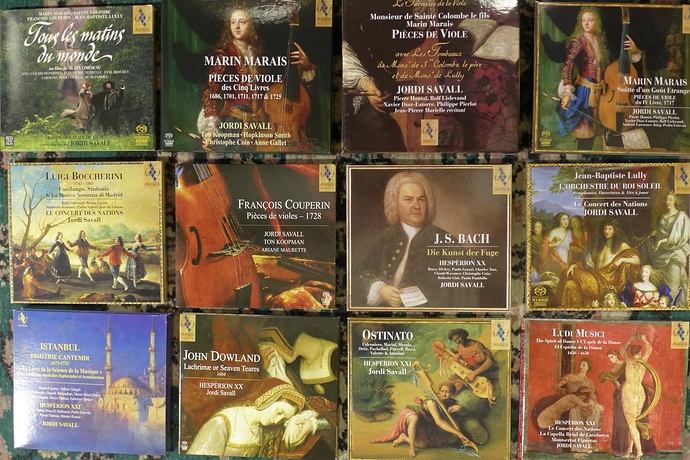 @Debs I have seven of those so I’m guessing our tastes will coincide quite a lot! I will start buying the others in the coming weeks…