A couple of questions for The Doors fans out there:

IMO the vinyl reissues from Analogue Productions are the pinnacle in sound. The Rhino vinyl reissues sound very good as well, but I think eventually you would want the AP versions.

I also own the Perception DVD box, with remasters from Bruce Botnick, and those sound very good, with some interesting mixes and good outtakes. I don’t have a surround system, so have been unable to take advantage of the surround sound mixes.

The 50th sets in general sound very good. Still annoyed that SD didn’t get the boxset treatment.
Soft Parade includes as an extra some tracks without the strings, horns (also available as an RSD separate release)… it’s interesting to hear, but I’m so used to the originals it’s suck it and see, I think. Robbie has overdubbed new guitar parts, which can provoke discussion (try Hoffman Forum).

I have original mono first and SD and the Rhino and VMP issues. I recall (it was awhile ago) that SD had a different mix to the stereo but I could be mistaken. Some say the S/T is more powerful in mono.
WFTS seems generally considered a fold down.

I have to admit, I play mostly the AP stereo releases these days, and also the Steve Hoffman ones I have on vinyl. And the originals of course!

I like Perception too. The box I haven’t played in quite awhile is the black snakeskin set. Nothing wrong with it, just doesn’t get pulled out often…

Many thanks for the feedback. I presume the Analogue Productions releases are as rare as hens’ teeth?

Not quite hen’s teeth… they’re out there. The Infinite boxset is hard to get in the UK*, but as single albums I’ve seen a few ( I would love an empty box, as I bought the albums singly over a couple of months).

You can buy the Doors AP lps directly from Acoustic Sounds. They are not rare, just often temporarily out of stock. I would wait for then to come back into stock before being gouged on Discogs or eBay.

Shame AP haven’t reissued the empty box apart from that limited number they had awhile ago (that I missed).

I’ve never purchased an LP from the States before. As a general point, are there import taxes if you do? And if so, is it still better value on average than purchasing it from a specialist retailer in the UK?

In general, yes, you will incur tax.

I’ve just looked at Ebay prices on the AP LPs for sale… they seem to be more or less double pretty much since I bought mine a few years ago, and some tripled - depends on seller. How much are AP asking (and shipping)?

The complete boxset is near a grand now on Ebay, sheesh…and tax on top from the US.

$60 for the LP, but an additional $54 for the cheapest postage. And then duty etc.

I’m going to track down a Doors AP release, within the UK, just to hear how good it sounds. I’m intrigued by what you and eltigreferoz have advised. Thanks for the guidance.

Good luck! They all sound brilliant, but the one that started me off was LA Woman. And it still sounds the best of the bunch to my ears. But that’s not saying a lot—these really set a standard production-wise.

Thank you Graham - much appreciated.

Decided to place an order for The Doors direct from AS in the States - will be interesting to see how expensive it turns out to be. Thanks to Quad33; eltigreferoz; and steviebee for the advice freely given.

The Analogue Productions stereo 45rpm are the ones to go for. Nothing else matches them.

The Steve Hoffman cuts of The Doors now fetch very high prices, probably more so in the US.
Now, they are hen’s teeth territory.

I only have the first three (on vinyl) and LAW in CD - I doubt I’ll find the others at a price I’d want to pay.

They were (and for some, still are) the holy grail - before AP released the 45s. One day, I’ll settle down and compare…

I have all the Hoffman releases too and the Analogue are better. 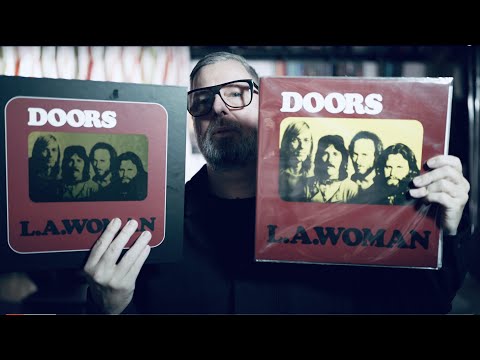 If there is a UHQR release of any of The Doors albums, I’ll be buying! But then, I’ve been a fan from 1967 so I tend to buy their reissues as a matter of course, if I can afford and find them.