Does the same happen with no source attached to the Nait?

You say it’s static on the volume knob, which is plastic so might be able to hold static but that doesn’t explain where it’s coming from. Have you access to a multimeter to check it’s not AC or a charge on the case of the Nait?

Is the static rather on you and discharging through the Nait? When I used to listen from a chair with a nylon cover in dry weather I’d get a belt when I touched the amplifier ps, which I did before handling the tone arm or there was a loud crack through the speakers. 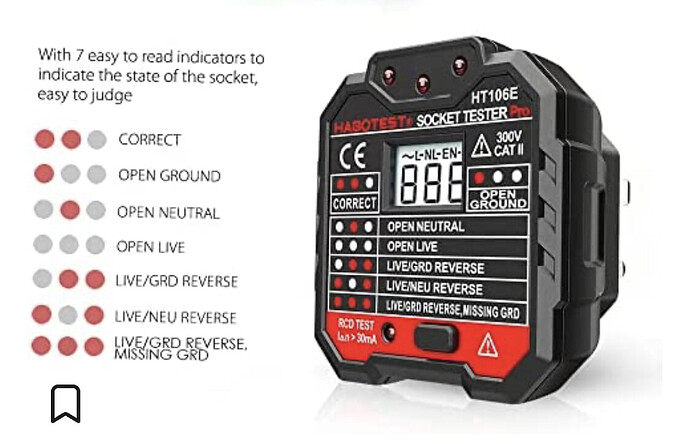 Oh right. Gotcha. Hmmm, I’ve certainly connected non earthed stuff including Yamaha sources to Naim before. As yet not had any problem with hum.

Another thread recently had a member with a similar problem and it was a faulty RCA cable. They used a different RCA lead and the problem went away. Can you test with another cable? Even those cheap free ones would help for troubleshooting.

As the Yamaha 303 has a two pin plug, does it have the following symbol on the Rating Label? 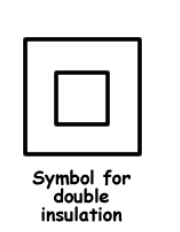 Where I should check, on the cable, case or somewhere in the user manual? By the way, what does this symbol mean?

Looks like I should start from the socket checking. Thanks, folks! I haven’t known there is such device.

It is usually out of sight. Either at the rear or underneath and will have all the technical information. A bit like this. 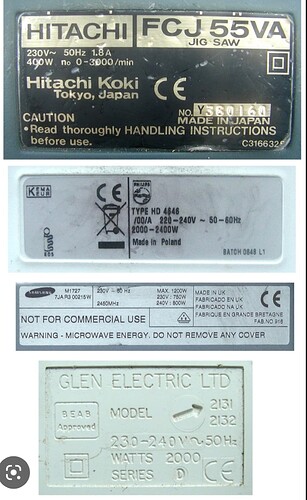 The symbol means that the component is double insulated and doesn’t require an earth.

All Yamaha gear is double insulated with no Mains earth requirement. There is no mains earth in Japan so Japanese makers don’t factor it in.

Thanks for confirming. That’s what I suspected.

The question is then, why are they earthing it?

From my experience, all yamahas(wxad-10, wxc-50, 303) and some other devices(elac discovery, arcam cds 50, node, svs 1000 sub, etc) gave humming being connected to 5si and every time I solved this by adding the additional ground cable as described in the post by the link above. This issue is described lots of time right on this forum.
This time, at the buyer’s home, is a bit different behavior - the hum goes out when the earthing cable attached, and then slowly returns and gradually increases for about half an hour.

Upd: a guy with SN3 is doing the very same.

Did you only connect them with RCAs?

This probably doesn’t help the OP at all but…

There are two approaches to signal ground:

In a replay chain the signal ground is usually the amp but with Naim it is assumed to be the source.

Both have pros and cons but it goes without saying, if the mains earth is noisy, then it can be a problem. But that doesn’t cause a hum. It causes clicks and pops. A 50/60Hz hum is usually an earth loop where the signal ground connects to earth in two places (usually one non obvious).

The symptoms described by the OP though, with a gradual fade in is a mystery to me. I have no helpful advice left.

Is it possible that the 5i is in need of recapping? Perhaps a rectifier cap/diode is on it’s last legs?

As @feeling_zen has intimated, we’re running out of options.

How old is the Amplifier and has it had a service?

If you can, could you get the user to photo all the connections, cables and plug sockets , with it all connected causing the hum.

These really help to understand what the problem is and offer any meaningful assistance.

As they say, a picture paints….

A long time ago, I had humming issues connecting a NAIT 5 via the AV input to a Yamaha DSP-A592 AV Receiver.
Tried everything (grounding leads, inline ground loop isolators, etc.) and never resolved the issue.
Ended up replacing the Yamaha with a Denon and the problem went away.
The only conclusion I and my dealer came to was that there was “something” wierd with the Yamaha grounding that Naim didn’t like.

Folks, I’ve just propagated all thoughts here to the new owner of the 5si. We developed some roadmap what to check, how to fix, where to look at, when to stop, etc.
Thank all of you for your support and sharing!

Hope that it gets all resolved.

Hi, reading through this thread… your description at the top implies the the ground reference of your 5Si is the same as your double insulated Yamaha.
Double insulated devices float… and their ground can be many volts above true earth, but at a very low charge. In short they can give you a little but harmless shock. If your Naim is doing this it suggests the additional Earth you have applied for it (as you say needed in Japan) is not connected to true earth… where are you connecting it to?

Stereo RCA connections often use use a shunt resistor and/or capacitor in the signal ground path to galvanically isolate them or at least make any inductive ground loop lossy.

So let’s sort the Naim earth out - make sure switch on your Naim source - ND5XS2? is set to chassis and NOT float and really important… that also has the same additional earth connected to it as the 5Si so the static shock goes away.

If you are not using any Naim source set to chassis, but only your Yamaha source, you will need to apply that separate earth to one or both of the RCA grounds as seen at the Yamaha… so you provide the required ground reference.

Once achieved let us know if any humming still occurs… then we can focus on the RCA.

I think you’ve misread the OP’s issue Simon.He’s not in Japan. The 5i is plugged into a regular earthed mains socket.

He’s done something special with earthing from the Yamaha. Presumably an interconnect with a signal ground dongle? Though the problem exists with and without that connected to ground.

Ok, thanks, at least I know who to blame.