I’m wondering if anyone has made the same dumb mistake as I have: I was doing some tweaking to my Naim system and stupidly disconnected & reconnected the XLR input at my NAP300 (which was powered off) however my NAC252/SC were still powered ON. When I powered up the system and listened, no sound on the channel on which I had disconnected the XLR.
My troubleshooting so far hasn’t worked so I still have one dead channel (right). I swapped the SC and same channel is still dead so I’ve eliminated the SC as the problem.
Can any of the techs in the forum provide a possible solution? Thank you!

This might be very obvious, but I assume you haven’t accidentally moved your balance control all the way to one side

I wish that were the case - balance control is centered.

Do you have a multimeter to check continuity on the XLR to din cable?

You haven’t detailed all your kit, but if you have more than one source, have you tried them all - if you only have one, can you plug that source into a different channel?

Gadget Man
Thanks for the suggestions.
My system is: 300DR-252/SC-CDX2/555-SL/SC – (+turntable, tuner, streamer)
I’ve swapped the XLR cables at the 300-end and the dead channel remained; I swapped them at the DIN end (at the SC) and there was then no sound in either channel, so I believe that eliminates those cables as the cause.
I’ve tried a different source and the dead channel remained so have eliminated the source as the problem.
I’m wondering if the 300amp or power supply could be the problem, although the power to those was switched off.
I’m at a loss.

…also I inserted a different SC and the dead channel remains so have eliminated the 252’s SC as the problem.

I had the whole system powered down for two days (while I cursed at myself for this dumb oversight) and I powered it up today but the dead channel is still dead.

A friend of mine just txt me after reading this topic
He had a similar experience and it turned out to be on of the burndy cables not seated properly,
Have you checked this ?

I will try that next - tomorrow actually - i’m also going to swap the 300PS cables but out of time today. Thanks!

I’ve swapped the XLR cables at the 300-end and the dead channel remained; I swapped them at the DIN end (at the SC) and there was then no sound in either channel, so I believe that eliminates those cables as the cause.

Remember that if you swap round the L and R cables, they are wired differently, so unless they are the right way round you will get silence from both channels.

Try placing your ear to the speaker tweeter of the dead channel with all things are powered on you may hear “ something” if you hear “something” your 300 is working. Possibly check speaker connections if you haven’t already, then xlr plugs for issues then work your way back to the cdx. Try the mono on the pre etc
Well that’s how I would going about it.

FOUND THE PROBLEM!
I tried all the suggestions, tore my system apart, started thinking about what I’d do with all the money after selling everything (maybe get a Bose system??)…then had the idea to listen to headphones thru the headphone output of my cassette deck (Tandberg 3014A that i keep running and listen to occasionally) connected to a tape input on the 252 – and sure enough both channels worked on all inputs! This greatly narrowed down the remaining troubleshooting. Turns out that the fault wasn’t caused by my disconnecting the XLR input at the 300 and didn’t involve the Naim gear at all. The problem is a faulty “black box” on the speaker cable of one channel–which I had first suspected but then eliminated since the problem remained after I’d switched the box. So–the issue is now isolated and i can see about getting that box repaired.
Thanks for all the helpful suggestions – and experience in this group!

what is “black box” on speaker cable?

I’m glad you asked that - like a bird on a wire.

what is “black box” on speaker cable?

Maybe that’s a custom-made Naim box to keep the ever so un-cooperative NACA5 in its place?!

One of these black boxes? 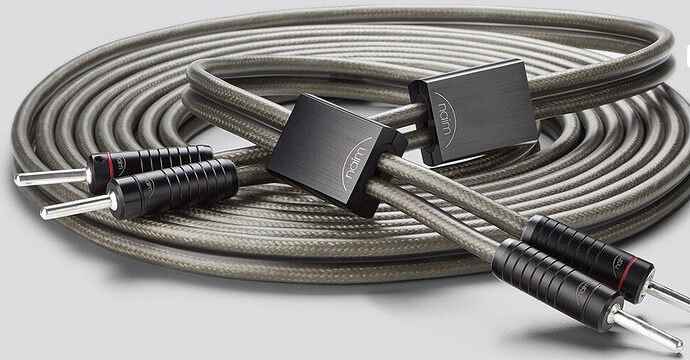