Dylan's off to Mozambique

This is a tale with an uncertain ending, from a Dylan fan hoping to get his hands on a musical fidelity 2LP 45rpm pressing of Oh Mercy. And Australia Post. And Mozambique. (Perhaps I should have sought a copy of Desire.)

A fellow Dylan fan on this esteemed forum recommended the acquisition of said pressing. Cue a conversation with my wife who understandably asked why I’d want another copy of an album I’ve already got, and why I wouldn’t instead buy three other records for the cost of this one. A valid point. Anyway, after much searching of the internet I found one retailer with it in stock, in Australia, yours for AUD125 (about £70). Ouch. For which they would ship it… but only to an Australian address.

An Australian friend (we kiwis do have some) kindly offered to receive the delivery, on the recommendation I avoid Australia Post.

The retailer has an exclusive relationship with Australia Post. So I paid my $125 and watched the parcel tracking as it traversed the land we fondly refer to as the West Island.

Imagine my joy when I received an email from Australia Post confirming its delivery to her office! I immediately arranged a courier to uplift it the next day and sent her an international shipping label to affix. Excitement barely contained!

The next morning she emailed back to say, no, it’s not here. She had been in the office all the previous day, no deliveries. (Yes, I should have checked first.) Meanwhile the courier I booked to collect it turned up and of course it wasn’t there so off they went empty handed. I placed a trace on the package and then later that day my friend rang to say yay it’s here! So I cancelled the trace and paid for another shipping note, this time to be posted from the local post office, as she had kindly offered to drop it there for me to save a courier pickup. I sent the new customs label, addressed you will be pleased to note to my workplace in New Zealand, she affixed it and half an hour later messaged me to say it was on its way. Yay!

Now you may have noticed I live in New Zealand, a fine set of islands to the east of Australia. Many items (and nefarious former citizens) are sent to New Zealand from Australia as we enjoy an excellent relationship.

Imagine my surprise, then, when I received this notification from Australia Post: 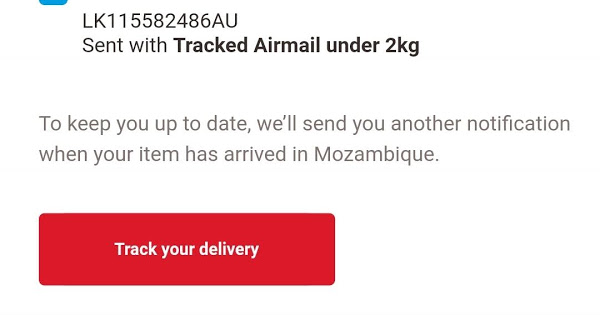 And that, my fellow music lovers, is where this story stops. I know not where my precious and now expensive record will travel in the coming months, but I promise to update you as information comes to hand.

PS I lodged a request with a very kind person at Australia Post to a) try to stop my parcel from heading westwards and b) refund my first shipping. He couldn’t achieve a) as there was no answer at the post office (as he put it, hopefully the barcode will scan as New Zealand instead of the clerk’s erroneous MZ entry in place of NZ) and put me through to a department to facilitate b) which after 15 minutes on hold advised me I needed to call a different number.

Gosh…I know things can go wrong, but that is taking the biscuit.

A few years ago i ordered a product from the USA (West Coast), to be shipped to my home in The Netherlands. Everything went fine and i followed the tracking online:

So that was great, it was already close to home. When i checked 2 days later to find out the final delivery, the status had updated:

It then travelled on to:

After which i finally received it.

A fellow Dylan fan on this esteemed forum recommended the acquisition of said pressing.

I think that was me. It will be worth it once it’s been to Mozambique and back to you. The bass is worth the trip in itself.

Yes Desire is definitely worth buying. If you can source the very limited Supervinyl pressing, that’s even better.

I sent a package of Potter material for a friend’s daughter in the USA, it didn’t arrive. About two weeks later a series of very badly worded and mis-spelt emails started arriving in her spam filter, saying we have your parcel, can we have your address? Needless to say it was greeted with scepticism

Eventually last week a very battered, bruised and sorry for itself parcel arrived back here, minus the label I had sellotaped on (customs declaration - gave senders address) . When I originally sent the parcel , I didn’t open it, it came direct from the manufacturer - so I guess my friend’s email address was on the receipt

So I paid and posted it a second time.

The moral of this story is that if you get a strange email saying we have your parcel there is an outside chance it may be genuine .

If think Australia Post is a nightmare try Telstra the Australian communication company you can’t communicate with.

I lived in Switzerland for a few years and several of our letters and parcels from the UK arrived after going via Swaziland!! As far as I am aware nothing went missing but delivery times were extended.

This might explain what happened to my package too when it suddenly when to Houston TX from Frankfurt DE. There is a town named Holland TX, perhaps some system re-routed it there instead of to the real Holland / Netherlands…

If you will permit the levity in the middle of your expensive frustration, did you perchance pick Australia Post’s “tracked worldwide” service? If so, you may be getting exactly what you paid for, a package tracked worldwide…

Try using Royal Mail to send to the Netherlands, had multiple parcels not arrive. Never any issue with any package from anywhere else. And this was all pre brexit.

All untracked unfortunately, so no idea where they went / what happened.

I think if there is anyway on social media that this story could get to Dylan he would find it amusing. He might even be inspired to write a song about Mozambique.

If you will permit the levity in the middle of your expensive frustration, did you perchance pick Australia Post’s “tracked worldwide” service? If so, you may be getting exactly what you paid for, a package tracked worldwide…

It does have tracking. Not much info yet. I thought the whole thing was hilarious. Mozambique! You couldn’t make it up.

If you can source the very limited Supervinyl pressing

Stop it! You’ll have me (further) into vinyl-induced debt!

Desire means a lot to me, so when it popped up on my screen that a limited Supervinyl pressing had just been released, I had to give it a go. I had the mfsl 45rpm already, but the supervinyl is better. It’s worth sourcing just for Sara alone.

Sara is my favourite and memorable Dylan track.

What song is that

The one without a “h” apparently

Sent a parcel with a number of birthday gifts to my father in France a few years ago via Royal Mail, normally ‘only’ takes a few days.

When it hadn’t arrived I started tracking it. Royal Mail tracking seemed to lose it as soon as it crossed the channel and could not trace it. I contacted them to report it lost but they said I had to wait 30 days. Cheers.

Tried La Poste tracker out of interest and they had it! In Brazil.

It had landed in Paris but for some reason had then gone on a diversion to Rio. I figured it would be apparent it was in wrong place as it did have FRANCE written on it in big letters and sure enough it moved on. To Sao Paulo. Then on to some other previously unknown to me but surprisingly large municipality in the centre of Brazil (I looked it up). Gave up after that. Figured I’d just wait my 30 days.

Did look again a little while later and was surprised to see it travelling again and in fact it did eventually turn up at my Dad’s, battered but contents intact, exactly 30 days after sending. Amazing.