Dynaudio actives and a source

I have a pair of Dynaudio Focus XD30 with a control unit which allows different sources to be routed through the speakers (TV, CD, DVD and streaming services). For streaming I mainly route Qobuz Hi Res through my IPad to the speakers. Is there any mileage in getting a dedicated streamer which I can plug into the control unit and/or the speakers? I’m new to wireless, active speakers so please forgive my ignorance. I’ve heard of Chord as a maker of devices which sound like they may fit the bill. Is there likely to be any improvement over just routing via my iPad? Any recommendations as to the kit to be thinking of would be gratefully received. How you link up the kit, too, please

I used to own XD 600’s, for about 5 years. When you say control unit, can I assume you mean the wireless transmitter? I did not use one of those because they always stated that hardwiring would give you the best results sonically. Also by using the transmitter, I think it limits you to 96 KHz files.
I had mine hardwired to my source, and to each other so I could get max sound (192 KHz).
Mine were used in a home theatre as the front L and R speakers. Later I used them for two channel, fed from the digital out of a UQ2, then 272, then an NDS. Each upgrade in source could be heard, I ended up moving to a one bedroom apartment, so let them go in a downsizing move, but I do miss them. 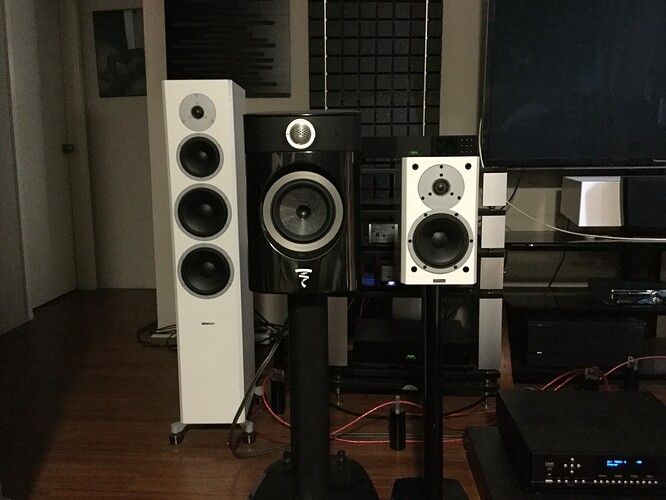 At one time I had them alongside Focal Sopra 1’s and Dyn Excite 12’s.

Thank you No Quarter. You are right about the control box - it does limit the ability to deal with very hi res signals unless you wire. I will look into the equipment you used as source

I would look at a streamer without a DAC onboard, since the XD’s have their own DAC inside…something like an Auralic G1, DCS bridge, Simaudio mind2 for example. The ones I listed that I used were originally used with passive speakers. I had a seperate two channel setup based on Naim components when I lived in a house, I blended the two together when I moved to the apartment I am now in.

I was considering a pair of these, and my dealer speaks very highly of them.
One thing to consider is that I believe they digitise any analogue input, so if you are already heavily invested in an expensive DAC, it’s benefits might be diluted by the subsequent ADC/DAC conversion in the XD30. I reckon the SPDIF output of a Naim streamer might be a good option.
This is largely speculation though, as I haven’t had the chance to listen to them. I believe @Bassfiend has a pair, so might be able to chip in if he’s still around?

Yes, if you’re using them with an analogue source then my understanding is that they do A-to-D the incoming signal before then DSPing it and amplifying it.

From the limited playing I’ve done with my 30XDs as analogue active speakers the A-to-D conversion seems benign rather than offensive … ultimately it seems to follow the tonal changes in source devices so if you are changing DACs then you’ll still get results just as you would with any other system - and as with any other system the results will be system dependent.

Edited to add : Just to be clear, if you are using them as analogue fed active speakers then any changes that you make to the analogue feed will be replicated in the resultant audio from the speaker, this is exactly the same as you would get with ANY audio setup whether analogue or digital, passive or active.

Myself I use mine as a straight, wired, S/PDIF setup using a streamer as a source … in fact at the moment I have a Raspberry Pi with an S/PDIF hat running RoPiee blutacked to the back of mine just because I fancied being a bit perverse and slapping a £50 source on them.

Thanks Bassfiend. You are much more techy/knowledgeable than I am - maybe it’s my age (63). May I impose on you a little further? [1] I don’t understand what you mean when you say you use them analogue rather than digital; [2] SPDIF doesn’t mean much to me; [3] as the speakers have a DAC I am thinking of having a home dem of a DCS Network bridge which, I think, means that the only DAC is in the speakers; [4] if I go with the DCS can I wire that into the Connect box and get the maximum performance out of the speakers [192 as opposed to 96]? And thanks to NoQuarter for identifying 3 possible sources!

[1] I don’t understand what you mean when you say you use them analogue rather than digital;

S/PDIF is the normal standard for digital audio in domestic audio setups and can be either electrical (usually with an RCA or BNC connector) or optical (with a TOSLink connector).

[3] as the speakers have a DAC I am thinking of having a home dem of a DCS Network bridge which, I think, means that the only DAC is in the speakers

As an aside I do like the Network Bridge as a piece of kit, I was with dCS for about eight months from the start of 2019. I ended up leaving after my dad passed away and I just had too much on my plate to be able to give them the attention that they deserved (and should expect) - amazing bunch of guys and they were so supportive plus the kit itself is beautifully built.

[4] if I go with the DCS can I wire that into the Connect box and get the maximum performance out of the speakers [192 as opposed to 96]?

No - anything that runs into the connect box is limited to 96kHz maximum sample rate - to handle 192kHz you need to run S/PDIF straight into the Focus XD’s AND you need to connect the two speakers together via an S/PDIF interconnect too.

You have managed to demystify it all. I now understand

Yes Phil is right with all his replies, if you look at that photo I posted, the bright coloured cables you can see on the ground are my Nordost Heimdall 2 cables I used to connect my source to the speakers, and the speakers together.
I ordered the cables when I ordered the speakers, two digital and two analog. They were not cheap, and these cables were the reason I did not bother with the connect box.
I also used Isoacoustics GAIA 3’s under mine, which you can see in the photo.