Is there anything between the sub £1,000 replicas and the Vitra versions? From what I understand, different manufacturers have the license to make ‘genuine‘ Eames chairs granted by the Eames estate - those are the expensive ones. Because of this and I might be wrong, I understand that the genuine Eames chairs supplied in Europe are made in Europe and those supplied in North America are made in the US. Are the replicas made in the Far East or does it vary?

I would love one but I am suspicious of the replicas because they seem ‘too cheap’ and the licensed examples are too expensive for what one gets, especially at UK prices.

The closest thing I have seen in concept is a chair from Boss Design, the Kruze Lounge, which I understand is UK made and priced ‘sensibly’. I am not sure it looks as comfortable though. 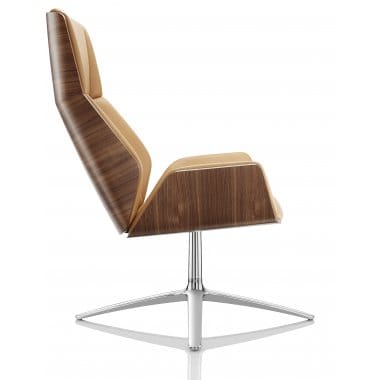 AFAIK, in Europe, Vitra of Italy are licensed to make them, while in the US it’s Herman Miller.

I have a friend who has an original Eames chair that is 40 yr old. The leather shows some signs of wear but otherwise it is in excellent condition. I have also seen cheap knockoffs that at less than 2 years old look very much like cheap knockoffs due to poor build quality. You get what you pay for and in the longer term it is cheaper to buy an authorised version 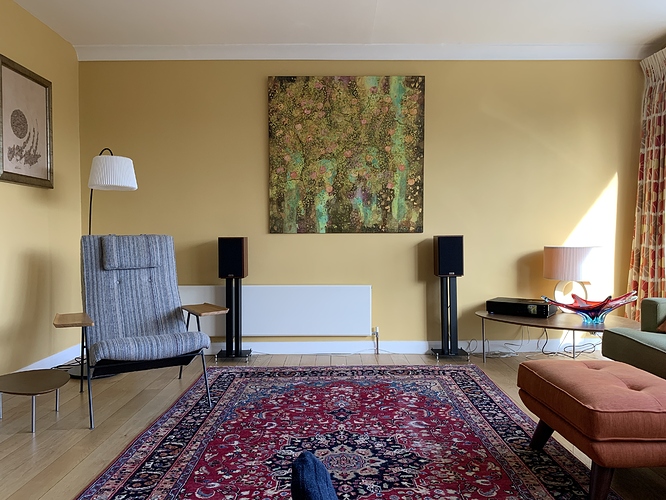 In this photo you can see my Reclining Chair by Robin Day ( the mid-century British furniture designer not the Question Time host!). I find it even more comfortable than Eames and has very handy wooden rests where a glass of whisky will sit nicely. Also designed in the 50’s and available new for about £2k. There are lots of interesting and iconic lounge chairs out there

Indeed, George Mulhauser designed some alternatives to the Herman Miller Eames lounge chair (including some that at first glance looked quite similar) and they were made and sold by Plycraft.

How about the Mr. Chair… 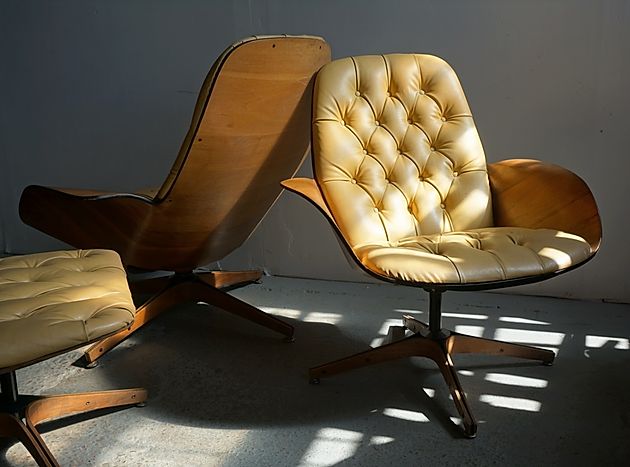 Have you tried Hansens Egg Chair? I found myself innocently returning to that chair in the shop all the time. Then I checked the price and I founded a world record running to my car shocked by the price. 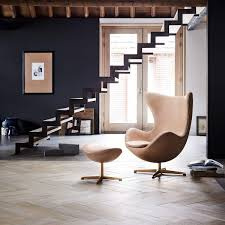 I would like an original, a nice patina to the leather but still in good condition. Does anyone know how the feather cushions hold up over time?

AFAIK, in Europe, Vitra of Italy are licensed to make them, while in the US it’s Herman Miller

Correct
My understanding was that Vitra produced in Switzerland?

Vitra is a Swiss Company, produces in Germany, Weil am Rhein, a fantastic place to visit because of architecture. Buildings from Frank Gehry, Herzog & de Meuron, Zaha Hadid, Tadao Ando and many others. You can also watch the Production (finishing) of the Eames chair.

Vitra is a great company. We have a sofa and chair manufactured by them and designed by Antonio Citterio.

I have a legitimate Eames Chair from Herman Miller, purchased through a local seller about 20 years ago for around $3000. It’s not in my listening room, but in the living room, and shows its age with some wear and scratches here and there. There’s nothing more comfortable to sit in that I’ve ever experienced.

Charles Eames studied at Washington University’s School of Architecture, which is 2 miles away from my house.

The Eames Lounge Chair and ottoman are furnishings made of molded plywood and leather, designed by Charles and Ray Eames for the Herman Miller furniture company. They are officially titled Eames Lounge and Ottoman and were released in 1956 after years of development by designers. They have been in continuous production since 1956 by the Herman Miller Company.Wikipedia

The Herman Miller and Vitra chairs are not the same. Size is different, the feet are different and the foam density is different. I believe the colour of the cherry veneer is also quite different, not sure about other veneers.

Here’s mine. I bought it from a furniture shop in London about 25 years ago. I was told it was made in Italy. I didn’t know much about the Eames recliner back then, but I liked the chair and it was being sold off cheaply as the shop was closing and the owner retiring. IIRC it was just under £800. It’s now needs the buttons re-strung on the main cushion but is otherwise still in pretty good nick. I use it in the “pod” which is my office, and in fact I’m sat in it right now as I type this on the computer. 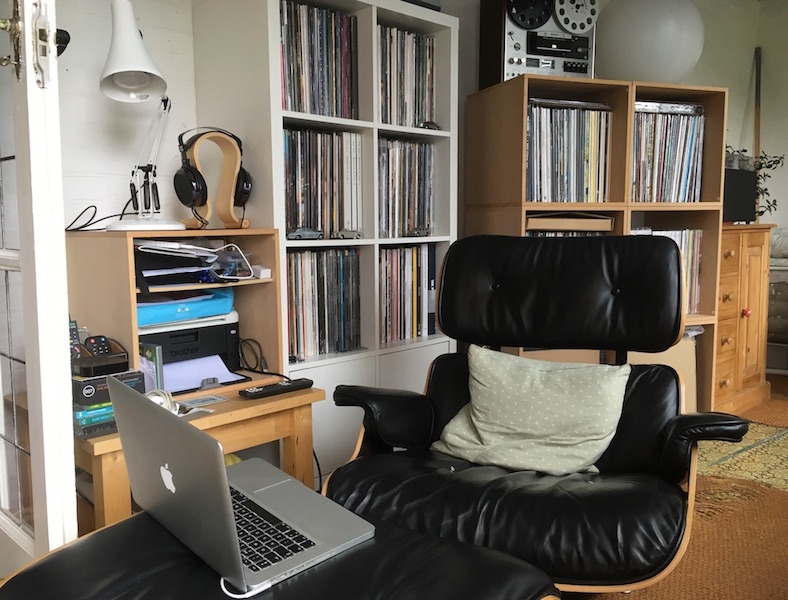 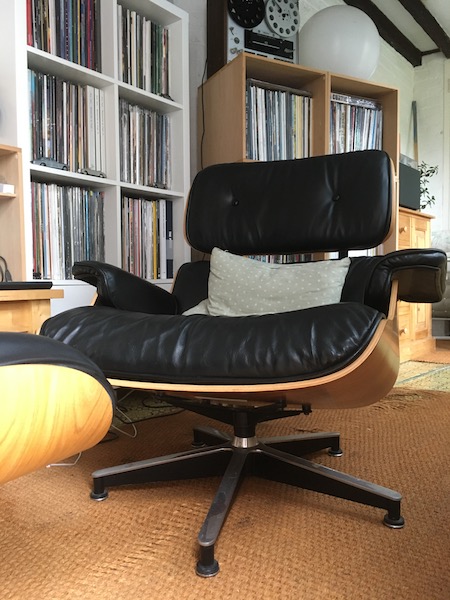 I do sometimes hanker for an early original, but the prices are fairly eye watering online from the dealers. Best bet is to look out for one at a local auction where I’ve seen secondhand genuine Vitra and Herman Millers go for anywhere from around £800-£2k.

On a different Eames chair, I have a couple of the Eames plastic chairs (DAW pattern) which I use as extra chairs for the upstairs lounge when I have (ah nostalgia) a largeish group of friends round, and bedroom clothes-piling chairs the rest of the time. I also have the plastic rocking chair (RAR), all three in the moss grey colour. Last year Vitra changed the colour palette for the Eames plastic chairs and as far as I can work out if I decide to buy a few more they won’t match.

You pay more for a copy here than those 2nd prices. 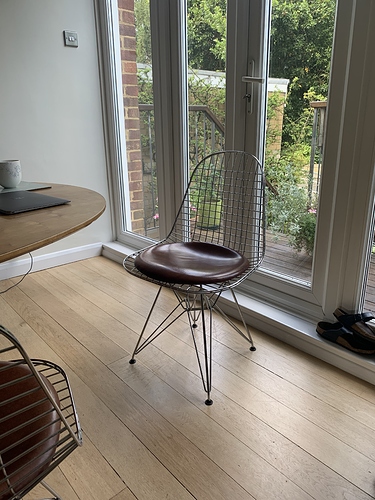 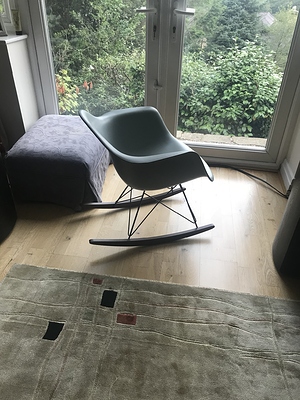 image1512×2016 1.38 MB
My Eames plastic rocker. They are incredibly comfortable. (I started the conversation about non-lounge Eames chairs, if it’s off topic apologies.)
4 Likes
← previous page next page →