Had my weekly ‘random’ choice morning earlier, where I shut my eyes & select an album (vinyl or ripped CD) from my vinyl cupboard or my Core via the Naim app.

Today produced a CD rip from a band I hadn’t listened to in years, Earth & Fire, their ‘Song of the Marching Children’ album from 1971. 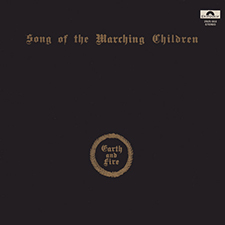 I discovered this Dutch band around 1970 when still living in my home county of Kent, one of the few areas along the southeast coast that could receive Hollands version of Radio Caroline, Radio Veronica. A superb pirate radio station, playing an excellent selection of pop, rock & progressive rock from bands all around the globe. It’s how I discovered Focus long before they became widely known in the UK.

Earth & Fire produced synth/keyboard & guitar driven pop & light rock music when I first heard them & I quite enjoyed a couple of their singles. In 1971 they recorded ‘Song of the Marching Children’ which was played a lot on Radio Veronica but was unobtainable in the UK. They followed up this ‘concept’ album with a second one titled ‘Atlantis’ in 1973. I enjoyed both immensely & was delighted to find that both albums were available as mail order imports from, I seem to recall, some bloke called Branson & his new company, ‘Virgin Records’. 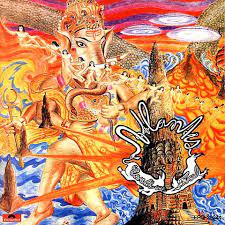 I purchased both & played them a lot, always enjoying them as early ‘prog rock/concept’ albums. Later bought a couple more albums, an earlier one & a later ‘Greatest Hits’ which were a little more variable in quality. Bought the CDs of them probably 20 years ago.

If you are 60+ & enjoyed prog rock you may like these two albums. They are probably ‘of their time’ so if you are younger, you possibly/probably won’t. If you do try streaming them, the ‘Marching Children CD has been padded out with some of the singles so I would strongly suggest going straight to ‘Song of the Marching Children’ 18 minute track first, as the first couple of tracks may put you off. My Atlantis CD is the same as my vinyl copy so play straight from the start.

Guessing not many will have heard of Earth & Fire so I hope someone, somewhere, enjoys these.

Earth & Fire, their ‘Song of the Marching Children’ album from 1971.

Great album in my collection.

If you haven’t heard it, strongly suggest giving Atlantis a go.

Strong recommendations from you both! I’ve got these lined up on Tidal for later.

Will be interested in your opinion once you have listened to them.

Yep got ‘em lined up as well

Very much of their time. I’m 66, with only a passing interest in prog, so may not be the exact demographic. So … interesting, but I doubt if I’ll be revisiting them. Nevertheless, thanks for the recommendation; I wouldn’t have come across this otherwise.

This is nice to read on a UK forum.
Earth & Fire split up in '83 but the band is still well known and played on the radio here in the Netherlands. After Earth & Fire, the front woman of the band, Jerney Kaagman (74 today), has been very active in the union for musicians and against illegal downloading of music. She also appeared as part of the panel/jury on TV shows like Idols.

Also great to hear Jerney is still with us. I knew she had had a career after the band first folded & had gathered she was/is quite a celebrity in the Netherlands.

I also note several newer Earth & Fire albums are available on the streaming channels & will take a listen over the next few weeks.

Qued up “Marching Children” on QOBUZ last night as my bedtime listening on headphones.

Very enjoyable slice of 70s prog and yet another band totally new to me discovered via all you wonderful people.

Guessing not many will have heard of Earth & Fire

Not if you’re Dutch and over 45 years old

Sadly though Jerney Kaagman is suffering from Parkinson’s disease nowadays

Same here, living abroad but also listening to Radio Veronica every day on my NDX2 which is more a 70’s, 80’s and 90’s radio station.

but on the subject of Dutch prog from the 70s….I offer you Alquin!

Taught Focus everything they know.

I have both the Earth & Fire albums mentioned above on vinyl. The Marching children is a MOV reissue and Atlantis is a dutch polydor pressing I think. I enjoy them both.
Their first album original pressing is very rare in the UK issued on Nepentha.
Sadly I don’t have an original!!!

Off to listen to this band called Solution now!!!

Playing here right now. Tidal has all their albums.