Which specifications does one look for in a speaker which reliably indicate that it is an easy load or easy to drive? Sensitivity, nominal impedance, minimum amplifier power?
Interested in upgrading my speakers within the year. Will have a NAP 500 by then, currently a 300 with Sopra-3 speakers here in the States. I understand that even the NAP 500 isn’t a “muscle amp” and want to avoid a difficult load. Some interest in Kudos (only one dealer in US), Wilson DAW so far.
I don’t really understand how impedance may affect this.

Every 3db increase in sensitivity (Roughly) cuts power requirement in half for same volume,i.e. 50 watts into speaker with 91db/watt sens will give same volume as 100 watts into Speaker with sens of 88 db/watt/meter, but having a flat impedance response seems to be the best predictor.

Though given its rather modest power output, very low sensitivity speakers may not be so much its thing?

I once owned TDL transmission line speakers that were difficult in the above sense, which is quite typical for the principle, as the pronounced air column pressure changes affect the chassis movement, making electric resistance volatile.

The sensitivity only tells you how loud it will go, not if it is an easy load on the amp, for which the impedance curve might at least as relevant, looking to see how much it dips, though I am not sure that even that is sufficient to be sure.

Impedance curves and phase angles tel you more. There are speakers that have 84db sensitivity that are easy to drive and speakers rated at 96db that are tricky to drive.

Speakers being easy to drive having generally high sensitivity is correlation not cause.

Because impedence curves and phase angles are rarely available and you might not understand them if they were, your absolute best guage of easy to drive is:

Voxative, Decware, Klipsh (naff), Omega all make speakers to be driven by valve amps of as little as 2 watts. JBL, have sensitivity below 90db yet are also fairly fleapower friendly from 10w and up.

Another factor is the degree of damping of cone movement by the acoustic load presented by the cabinet- the less damped the more the speaker may benefit from a low amplifier output impedance (high “damping factor”).

And there is no correlation between how easy a speaker is to drive and how good it sounds, other than if it is hard to drive it will sound less good with a less capable amp.

It’s related to the complex impedance of the speaker and how this varies against frequency.

You need to take into account both the magnitude of the impedance (Ohms) and the Phase Angle (Degrees or Radians). It is very rare for a speaker manufacturer to publish sufficient data about the complex impedance for any realistic estimate to be made.

In terms of the 500 not being a muscle amp, what do you believe defines a muscle amp? The 500 is capable of delivering very high current into very low impedances, fast voltage swings and very fast changes of current

Thanks for the responses.
@Xanthe, “In terms of the 500 not being a muscle amp, what do you believe defines a muscle amp? The 500 is capable of delivering very high current into very low impedances, fast voltage swings and very fast changes of current”.
There is a current thread regarding muscle amps that can be used with Naim preamps and they consider amps such as Boulder and Bryston in contrast to the NAP 500. That’s were my impression comes from.

The weight of an amplifier gives a hint about it’s muscles. The NAP S1s are 101kg each.

Well if you mean is the NAP500 like some beasts that have nominal output of 300w, then no it isn’t a muscle amp in that regard. And there are still some speakers that would need to be biamped or triamped with NAP500 to drive properly.

But this is a discussion of degrees. The NAP500 has more current than most amps. And can swing transients (which is what generally counts) more than most amps of twice it’s power.

“Hard to drive” and “powerful amp” are pretty useless terms really. It is like saying a car was going “fast”. Fast is not a speed, and “powerful” is not an output rating. Together with the fact the range of amps is so vast from 1w tubes to 1Kw monsters and speakers to fit all of these. If you use tiny tube amps, then you probably think anything over 25w is a “muscle” amp. It is all relative.

@cat345 Klipsh aren’t what they used to be. They are all about bargain basement boxes that are massive and cost next to nothing. They have a couple expensive retro horns in the line up (emphasis on a “couple”) but otherwise they just make cheap BIG stuff these days.

The 300 has a higher peak current than a 500, the 500 is lower noise.
Stereophile publish graphs of impedance and phase angle when they review a speaker, a lot of the reviews appear on line and there’s usually a comment about ease of driving, a high phase angle sucks current beyond what the corresponding impedance would suggest. Nevertheless you will need luck to find a good match based on specs alone.
Naim’s own speakers tended to be a relatively easy load.

@cat345 Klipsh aren’t what they used to be. They are all about bargain basement boxes that are massive and cost next to nothing. They have a couple expensive retro horns in the line up (emphasis on a “couple”) but otherwise they just make cheap BIG stuff these days.

Well, if you have room for Klipschorns or La Scalas, you can use them with a high quality low wattage amplifier or you can choose inefficient speakers (most are) with a muscle amp. With the latter, past a certain listening volume, compression and a hardening of sound take place no matter the power rating of the amp…

You takes your pick and you pays your money.

*. And if you often listen at these volumes it won’t matter after a time, as you’ll have damaged your hearing anyway!

Given that the 500 is a bridge configuration it’s highly unlikely that is has a lower noise performance, however in listening, it may ‘appear’ to show lower noise. In reality this is likely to be due to factors other than noise (such as faster/more accurate transient response due to symmetrical PSU loading).

In those terms ‘muscle amp’ is a meaningless concept simply used to denote an amplifier that can deliver high continuous RMS power into simple loads.

This tells you nothing about how well an amp performs into complex loads (which Naim amps tend to do better than their simple RMS power rating would suggest!). 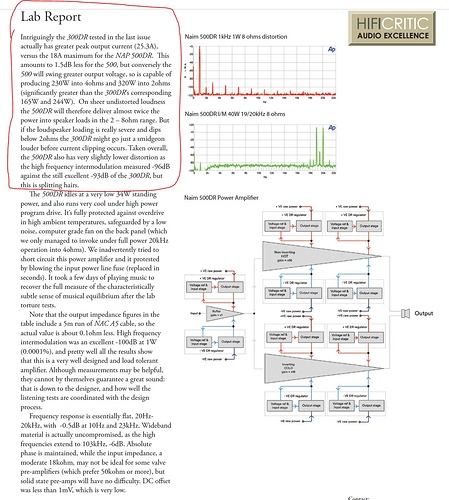 Oh for sure and I looked at buying a pair of Klipsch Cornwalls but too rich for my blood. But other than the few speakers in the Heritage range, they make a lot of massive cheap stuff. The Reference range is what they are about these days. Though I suppose if you have a massive room to accommodate them, and are on a very tight budget with a valve amp, they might be just what the doctor ordered,

So I shouldn’t really use the word “naff” I admit. If I lived in a barn and wanted to build a surround sound setup to fill the said barn from a modestly powered AV receiver, I’d probably go for Klipsch to do the job well. But if I wanted to build a quality hifi for a normal living room and was looking to spend more than their bargain basement Reference range but less than the Heritage range, I would (and did) go elsewhere.

i.e. which delivers more current is dependent on the effective load, below about 1.5ohms the 300 wins, above 1.5ohms the 500 wins.

Globally, in “normal” listening conditions, the 500 DR has more head room it terms of current delivery, control and much better distortions levels.

In my experience, this is very much audible, which is quite pleasant

Still, the 300 DR keeps being an amazing value.