Electrical discharge when turning off the amp

lately I happen to experience a noticeable electrical discharge when turning my amplifier off (it doesn’t happen all the time, but I experienced it at least twice in the last couple of weeks).

Should this be a concern? Could my amplifier be damaged?

I’ve been using this amp (Exposure 3010 S2 D) for at least a couple of years and never had an issue like that.

Thank you very much in advance for any advice!

Maybe @Mike-B or Richard Dane can respond.
Sorry Mike, each time I see an electric problem, I am thinking of you.

Are you saying you get an electric shock from the amplifier?

@Richard.Dane Maybe I didn’t explain it properly. This usually happens when I touch the volume knob, right before turning it off. I would say that it’s a an electrostatic discharge, (maybe?) calling that an electric shock is too much. I hope I made myself clear now. By the way I didn’t notice anything wrong with the amp, the sound is fine. Any thoughts?

It just sounds like a static discharge. You build up a charge as you move about and it discharges when you touch the volume control. Nothing to worry about with regards the amp.

Possibly the air is drier in your room at the moment, you’re wearing different shoes / clothes etc which are causing you to build up more of a charge than usual and the resulting discharge is more noticeable.

I would call it an (electro)static discharge as well. Normally I wouldn’t worry for such things, but as it’s been strong, I’ve been wondering if there’s something wrong with the whole system and been worried as the electronics could be sensitive to this. Somehow I should try to discharge before touching the amp.

I get them all the time at work when I wear trainers. The trainer soles + carpet tiles build a good charge. Just try touching another earthed object, a radiator maybe or a metal light switch first before touching the amp, but you’re not going to damage the amp either way. It’s just uncomfortable.

In particular very common with certain types of carpet, but charge can be generated even without a carpet - and dry air increases the tendency.

If prone to it, the thing to do is bring your knuckle close to an earthed object after walking across the room - e.g. the amp case, or some other piece of metalwork. It is a simple habit to get into. The spark causes less discomfort on the knuckle than on the fingertip, and once the charge is dissipated with the spark that jumps between you and teh object you can then operate the volume control or anything else without the ‘shock’.

No damage is likely even to very sensitive electronics properly shrouded in a metal case, so no worries there.

I brought some new slippers, and started getting static shocks of everything with an earthed case! I wouldn’t worry

It is worth buying a cheap humidity meter to see how dry the air is, since low humidity can make you feel unwell (e.g., headaches and drying of mucus membranes). To reduce the shock when you touch the amplifier you could invest in an anti-static wrist strap and touch this before the amp. The strap incorporates a 1M ohm resistor that will slowly discharge the static and stop the shock. However, sorting out the humidity will be good all round.

The Exposure amp has an E pin in its IEC plug so that indicates the case is earth (ground) connected.
If it is a static discharge, as mentioned above, low humidity, nylon carpets & such like can be a cause.
The OP doesn’t indicate where he lives, but if UK or around that region, I doubt it’s low humidity, that needs sub 0’C (32’F) for numbers of days.

You can easily have low enough humidity in Britain to exacerbate static and to cause irritation of mucous membranes (e.g. dry eyes, itchy nose). For comfort relative humidity should be in the range 40-70% ideally in the middle of this, i.e. 50-60%, but even in Britain the humidity indoors not uncommonly can be down to 30% especially with central heating. I don’t have numerical data on relationship with static, but simply the lower the humidity the greater the static problem - and 30% relative is very low.

But low humidity doesn’t cause static, merely reduces its self-discharge so increasing the amount of charge.

By low humidity I was thinking only low enough to cause a visible/audible static discharge as described by Blacknote, which in my experience does become such a problem in 24/7 sub-0’C.
I’ve spent many a 20 below winter in northern USA getting up the courage to put the key in the hotel door.
But yes its present all the time.

@james_n I have no carpet right now but it could be my slippers/jumper, I guess I should touch an earthed object as @Innocent_Bystander suggested.

I’m glad that at least my electronics are safe, that’s what matters. However my electrical system is not earthed, does this change your statement @Mike-B? By the way I’ve already planned to solve this.

@XMB I have a meter and just checked, humidity is 35% so it’s very dry despite trying to keep it in range.

However my electrical system is not earthed, does this change your statement @Mike-B?

Do you mean your power sockets are two pin L & N only.?
No it doesn’t change my statement, whatever you think that implies.
The Exposure amp has an IEC inlet with an E pin, meaning it’s case is connected to the E wire, but you are now telling us there is nothing for the E wire to connect to.
Yes I know some parts of Europe don’t have earth power sockets & some don’t even have earth to the property.
In the old days that worked, but with modern equipment, it’s not good.

What I wanted to say is if not having a proper earthing can affect the electronics of my amp considering this electrical discharge issue.
Here in Italy most electrical system are not earth grounded, I believe. However new ones have to be. This is going to be changed soon hopefully, I’ve already planned a fully new electrical system.

Not having a safety earth will affect something as it’s not meant to work that way, not least your personal safety.
Will it affect the electronics, yes but how I’m not sure, there is probably as many answers as there are scenarios.

If you go to any electronics manufacturing facility, Naim factory for example, all the assembly workers have ground straps attached and others have ground straps on their shoes to connect them to the ground treated floor surface.
This protects the sensitive electronic parts from static discharge damage between them & the operatives.

only low enough to cause a visible/audible static discharge as described by Blacknote, which in my experience does become such a problem in 24/7 sub-0’C.

Yes, below freezing for a long time really dries the air, but static can certainly be an issue even in summer temperatures with some but relatively low humidity, not necessary to be bone dry.

In Italy you need to have shoes with ground straps to listen to music. 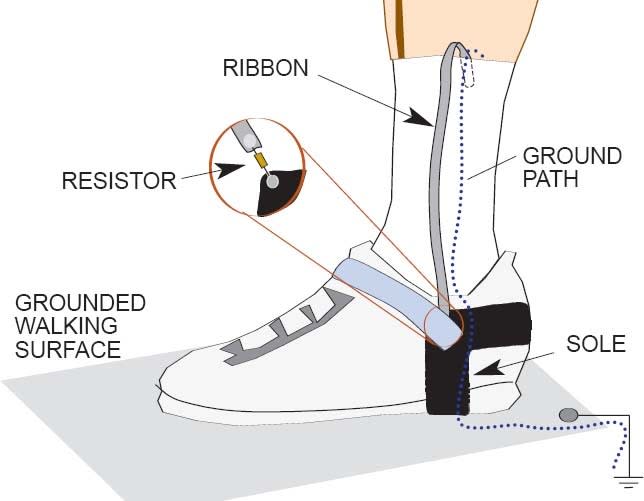 We were given those to wear, or something similar, when we had a Naim factory tour.