I’m considering having a separate supply installed using a Henley block etc. I know the general supply varies individually depending on location, original installation and age to name but a few criteria.
I would however be grateful for feedback and whether those of you who have gone through this process consider it a worthwhile expenditure.

Best investment under £1000. There is lots of good advice on here.
Wish I had it done properly years ago.
For what it is worth make sure the consumer units are separated and that the earth is split too.

I did mine last year - something I should have done a long time ago. Very worthwhile

If you are UK based then use this as a guide. 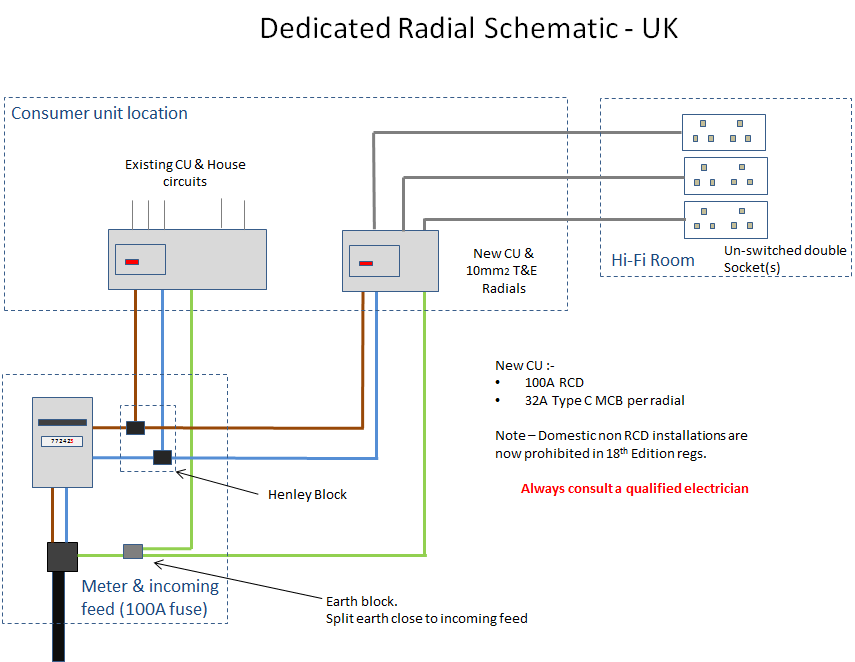 The final configuration of sockets is up to you and the amount of kit you have - whether you go for a single radial and socket and use a hydra arrangement or use multiple radials to multiple double sockets. Lots of opinions on here to which approach works best. As Huw mentions above, the most important thing is to split the Consumer unit and get the earth connection for the new consumer unit for the Hi-Fi from as close to the incoming supply earth as possible.

The only thing that worries me about this (as I would like to have this in my own house) is the amount of disruption it would cause. I can imagine having this fitted would be a right pain.

Each individual circumstance is different. In my case I live in a Grade II listed property; when I renovated it I put in dedicated spurs to each room that I could envisage having music. I asked for the consumer unit to be split, but the sparks thought he knew better. Thus five years later I have had to have the consumer unit split. In addition I put in an extra run of earth cable, but this was routed around the outside of the house (because crawl spaces etc made it too difficult to run internally), so there was minimal disruption in the end.

Thanks, I’ll use this diagram to obtain prices.

One after thought. Would it be worthwhile installing a voltage optimiser and if so where in the above diagram?

Unless you have specific over voltage problems (an issue that utility company would deal with) then i’d not install any voltage optimisation.

Definitely worth the hassle!

Thanks for the replies. As I’m in my forever house I’ll go ahead with a separate supply.
As a matter of interest has anybody compared the benefits of a separate electrical supply from the consumer unit to those achieved by adding separate Naim power supplies?

The short answer is - do both if you can afford it.

I’d suggest running a single 10mm2 cable to a double unswitched socket and then using a good mains block, rather than multiple cable runs and multiple sockets.

I did the same as @james_n above and can confirm that the improvement in sound quality was immense. I had the work done when we had a new kitchen in 2012, so all the consumer unit work could be combined together. Certainly on a 500 series system, the effects are worthwhile.

I also concur that multiple radials (as James has had installed) work well and avoids the unnecessary confusion of having to chose a suitable multi-way block on the end of a single radial (plus decisions on which plug-in order to use).

Highly recommended, and has eliminated transformer hum as well as improving the depth and quality of the music.

Naim’s original advice from the old days for best UK mains supply was as follows (slightly expurgated to remove a few contentious recs that may not comply with current regs);

Use a separate spur; similar to one used for the hob part of a cooker. Use 38A cable (6mm2)for normal length runs. Use 52A cable (10mm2) for longer runs. Some people use 10mm2anyway, this is probably slightly better, but much more difficult to work with. If you have to use an MCB then use a 32A type as a minimum. Lower rated ones switch off far too often when the big equipment is switched on.

Use un-switched sockets and normal plugs (we favour Crabtree units). Get as many double sockets as you need fitted then wire them as a star from the main incoming cable

People have tried using more than one spur. Most who have think you can go too far. From a consensus the best seems to be a spur for the sources, one for the pre-amp and snaxo PS’s and one for the power amps.

Note that this is for UK ONLY.

I’m not in a position to install a separate consumer unit for practical reasons. As stands all the sockets in the upstairs of my house where my hifi resides are on the one ring and one MCB so not ideal I’m guessing. Presumably there’s still an advantage in this case to wiring a dedicated 10mm t&e radial from a new MCB on existing CU to say two MK’s for the hifi?

We moved in in January and one of the first things I did was get the local electrician to install a separate CU fitted with 7 10mm radials terminated in unswitched 15 amp round pin sockets. He tried hard to dissuade me and then cursed and swore as he fitted it all.

Finally he blamed me for the fact that he’d told his Dad and he now wanted something similar.

When I put a dedicated circuit in from the main consumer unit, I thought the benefits were marginal at best. Putting in a small separate CU later was a real improvement, so I’d say it would be worth considering if there is any way you can squeeze one in somewhere. It doesn’t matter too much where you put it, as long as you can connect it back to your meter. The small ‘garage’ type units are the ones to go for.

This is pretty much what Steve Hopkins recommended to me a couple of years ago. A couple of other suggestions he made:
Use Type C MCBs rather than the more commonly used Type B, and you are much less likely to trip them when switching on your Naim boxes.
Connect the earth from the separate consumer unit straight back to the earth block near your meter/incoming mains cable. (Lazy sparkies sometimes connect them to the main consumer unit if it’s easier for them.)