England has the plan ready for USA tonight

England goes up against the favorite,.and the reigning champion USA in the first World Championship semifinals in Lyon 21.00 tonight.

If England were to blare and reach the final,.it would be the first senior final for an English national team…
That after the men’s classic gold in the World Championship 1966.

Ever since Phil Neville took the job as head coach,.he has planned for an important match against the United States.

-“When I took the job,.I started to look at three games with the USA from my house in Valencia. And asked me the question: How can we beat them in the World Championship.”

Just wishing England’s ladies good luck tonight. And that Sweden’s ladies defeat the Netherlands tomorrow.
Then England and Sweden will meet in the finals.

And that Sweden’s ladies defeat the Netherlands tomorrow.

This has been noticed.

This has been noticed.

Three straight semi finals,…but no final.
That’s why Lucy Bronze thinks that England is more hungry than Sweden, USA and the Netherlands now under the final week in Lyon.

We are the only team that has not reached a final…
OLYMPICS, World Championship and EM-finals are what the other teams have recently.
So we have an advantage in our hunger,.says the star,when she talks about tonight’s semi final against the United States.

We have similar talents,.and we have the same drive.
But this time we have also played more together,.says Bronze about the team that is now set against the USA.

Yes fingers, toes and testicles are crossed. Good luck. They are doing an awecredible job.

COME ON YOU LIONESSES! 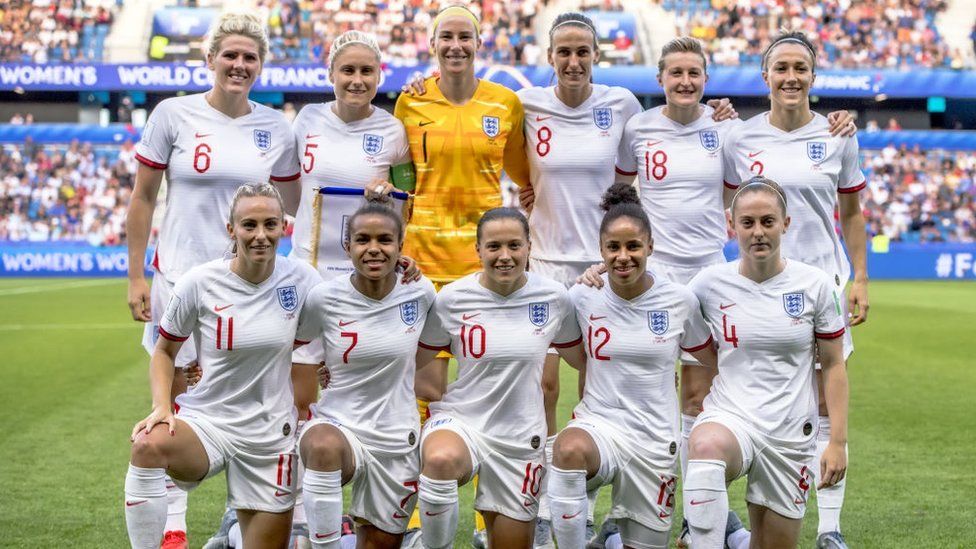 Got a barnburner guys. Excellent play both teams. They both really move the ball. Forgive me a GO USA!!

All credit to the USA there, they were just a bit too good for our gels.

So close. Disallowed goal and the missed penalty, it could have been so different. Entertaining though.

Really enjoyed the game - a nail biting and impressive performance from both teams. Frankly I have no idea what these ladies are paid but it makes the overpaid prima-donnas of the male game look decidedly average and unimpressive.

The male England team ought to be ashamed of their appalling record!

How much do England footballers get paid per match?
The players get (by footballers standards) a nominal fee of around £1000 per game. Given the fact that many of the players will earn 100x more than that from their weekly club wage, it’s been common for a few years now for the players to donate their national team match salary to a charity.

The male England team ought to be ashamed of their appalling record!

Well that’s an average, covering that guy at Man U on half a million a week all the way down to the reserve keeper at Watford, whoever he might be.

When women’s football routinely attracts paying crowds of 50,000+ and generates tv audiences on PPV channels that justify the increase in cost to the punter the arguments about relative pay can be addressed.

That said, I’ve loved this exposure to a new form of football. Once you adapt to the different pace and different approach it’s enjoyable, but top level football it’s not. England have been full of holes football wise, so have most of the teams I’ve watched. And the arguments that women’s football doesn’t suffer from the diving, play-acting and time wasting that the men’s game does clearly didn’t watch tonight’s game or any of the other matches. It’s not as prevelant, but it’s there.

For a long while I’ve seen the Women’s game as on a par with 3rd division men’s football, give or take. That it’s now improved to ok 2nd division [Championship] level doesn’t make it must see, not yet. It’ll probably get there in a few years but I won’t be swapping Sunday 4:00pm games & MoTD for it yet.

Well done to the England Women’s football team knocked out the semi - final to a better team I suppose though all that running the clock down with seven minutes to go wasn’t great to watch.
Would I watch the women’s game regularly? Know I would not and for all the reasons mentioned above by HouseholdNaim who I think is being very kind comparing it to Championship football but is spot on when it comes to the rates of pay that women get compared to men.
For me it’s still very much a novelty act and like Rugby and Cricket will always be that and that’s purely down to the physicality of the players.
The woman’s game did make great strides over the past month but also and I’m talking about Cameroon in particular here had a few setbacks but having said that VAR has been terrible with decisions taking seven or eight minutes that WILL NOT work long term and needs addressing.
Will I watch the semi tonight and the final purely because I love watching women’s football in the way I love watching the mens game? No I won’t.

Ever since Phil Neville took the job as head coach,.he has planned for an important match against the United States.

-“When I took the job,.I started to look at three games with the USA from my house in Valencia. And asked me the question: How can we beat them in the World Championship.”

Well it’s back to the drawing board then Phil.

It’s not beach volleyball, is it.

Ardbeg10y,…Not in the first 90 minutes

, then Sweden was the team that drove the match.

But by extension 2•15 minutes the Netherlands took over.
Though everyone seems to agree that the referee Marie-Soleil Beaudoin was a disaster.
A former Fifa-referee says,.that it is embarrassing to appoint such a referee to a Semi final of a World Championship.

He also says that Sweden should have received a penalty when the swedish player Hurtig was fell in the penal area.
But the referee didn’t even take and look at VAR.

Catastrophically bad level according to the Fifa referee.
And I agree.

Also a lot of weird blows when Sweden would hit corners,.completely hard to understand according to the Fifa-referee.