The proposed new football European Super League has been met with universal condemnation by everyone one from footballs governing bodies, fans and pundits alike, am I the only one who relishes the idea of my top six side (I’m a long standing Man Utd supporter) playing the best in Europe on a weekly basis ? 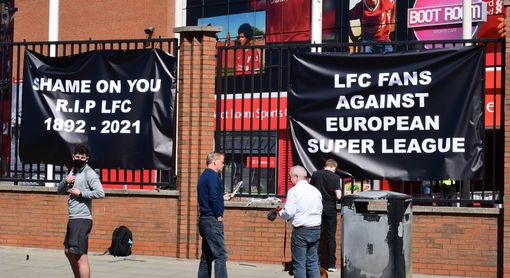 Then I’d say the ESL is just for you.

Definitely not for me so I’m out and potentialy giving up as an Arsenal fan. Not that Stan K cares as this isn’t for the fans.

I like competition and that Wenger worked hard to stay in the champions league for 14+ years. Now we’re 9th we don’t deserve to play on the same pitch as Real Madrid. I don’t want to see Arsenal there by default.

WIll soon become very boring. No true fan that cherishes the history, traditions and rivalries of their club would support this.

Will you be booking flights to spain and italy every week?

am I the only one who relishes the idea of my top six side (I’m a long standing Man Utd supporter) playing the best in Europe on a weekly basis ?

Yes, I think you probably are. 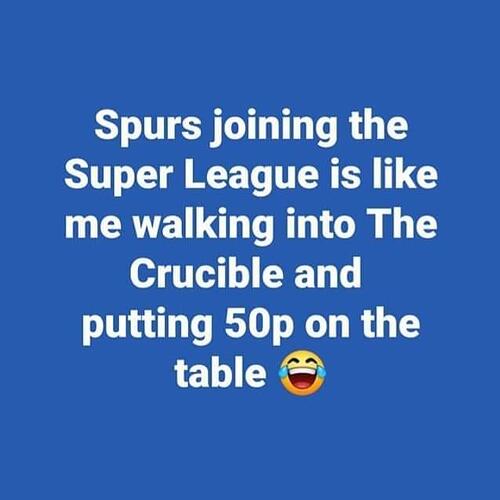 As a lifelong Evertonian I’m pleased that my club doesn’t seem to have been dragged into this. It also means we might have a chance of winning the Premier League soon!

I’m a lifelong Man City fan and was at the Wembley play off final v Gillingham at a time when our local derby was vs Stockport County (and usually getting beat). We went from that low point to being serial Premier League winners enjoying unprecedented success with regular Champions League participation, but now we are one of the dirty dozen preventing anyone else making that journey.

Given that we have been complaining about UEFA’s FFP being in place to protect the elite, it smacks of double standards. I feel we we’re not one of the prime movers in this, but nonetheless the damage has been done.

playing the best in Europe on a weekly basis ?

Best in Europe? Both if going by recent and historic results those aren’t the best 12 clubs in Europe.

On what basis is Spurs there? And how well did Juventus do recently, none of the clubs knocking them out are in. Where’s Bayern Munich? PSG? Borussia Dortmund?

And the main problem is of course that it won’t matter in the future anyway. You’ll be playing those exact same teams, regardless of their performance. Whether they’re the best or worst in Europe.

I do think it is a bit rich of FIFA and UEFA to claim that money is spoiling the game! I gave up on Arsenal when they left Highbury. I watch/help out at my local rugby club and it is much more rewarding and involving than watching football played by very talented players that live in a completely different world to me.

Won’t happen. Just a tool for buying more votes and power at home.

Oil money has basically ruined football on all levels, from clubs to UEFA/FIFA themselves, it’s such a mess.

If the premier league fine them 60 points each West Brom should stay up ! Fingers very much crossed

At this rate, The Mighty Whites will be playing in The Champions League, by default, next season!

Isn’t this being discussed in the main football thread?
@Richard.Dane could they be merged?

It’s probably better that the issue of a Super League have its own thread, so the existing Football thread can focus on the actual season itself.