“Actress Dame Emma Thompson has joined the Extinction Rebellion protests in London after flying from Los Angeles as activists plan to target Heathrow Airport over the Easter weekend.”

“A representative of Dame Emma said she needed to take the 5,400-mile flight home to London after working in LA.”

Says it all, really.

Personally I think the protest is justified, and possibly may be worthwhile, though it needs to global not just in Britain. However I disagree with the tactics. Rather than stopping the people who work or travel through certain areas from being able to work or travel, Inthink they would have been better doing something different creating an impenatrable wall of protestors stuck together around Parliament, while politicians were inside. That likely would have got just as much publicity, with more public support, and more notice by the people who are supposed to make the decisions.

I too agree their is some justification in the protests. However preventing people going about their business makes it debatable. I know of someone who missed a business appointment during the week & it looks like it will cost him…
So I agree protesting around parliament would focus minds in that house & maybe win a lot more supporters than the numbers of angry people they have made this week.

Sometimes, unfortunately, Governments only take notice when people make a damn nuisance of themselves. It’s better for a few people to miss a meeting than for us all to drown under rising seas or cough ourselves to death by breathing poisoned air. It’s time for Government to get of its fat gammon arse and deal with the things that really matter.

Governments only take notice when people make a damn nuisance of themselves.

It’s a shame they weren’t sitting then, but point taken.

I was walking through Parliament Square on Monday, and met some of the procession, and at that point it all seemed harmless enough, and indeed i support some of the principles of their cause. Sure I have later heard there were antics in some other parts of London, not least the Shell building, but I wonder how much of that cast a shadow over the thousands that I saw on Monday there cheerful, passionate, respectful and peaceful… 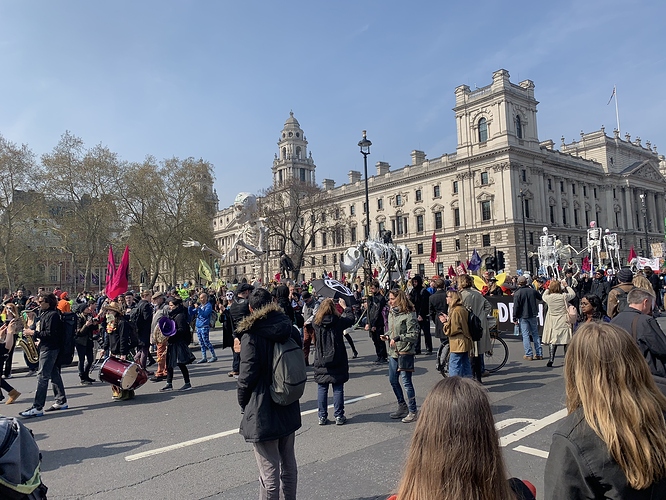 BTW New Orleans funeral jazz that was being played was rather good.

To Dave’s point, I agree one of the biggest sins is hypocrisy… marching for environment whilst polluting the planet with your lifestyle choices… appalling.

To Dave’s point, I agree one of the biggest sins is hypocrisy… marching for environment whilst polluting the planet with your lifestyle choices… appalling.

Yes, Simon, regardless of my own particular views on the question of climate change, I do find the whole luvvie virtue signalling thing somewhat hypocritical, a case of “do as I say, not as I do”, though I will concede that Dame Emma Thompson is, in this case, something of an easy target.

I wonder how many of these protesters actually drive? On a more local note, how often do you see people using mobile phones protesting over the erection of a new phone mast.
Inconsistency and nimbyism at its best.

The vast majority on this forum probably sympathise with the main principles of the protesters. However, just how many of us have not flown in the past 12 months ?
It’s easy to pick on poor Emma.

What are they protesting about?

I did concede that she was an easy target, but then the same could be said of any “celeb” whose public statements in support of whatever, are somewhat undermined by their private lifestyle, don’t you think?

As for the rest of us mere mortals, there would surely exist something of a conundrum; sympathising with the protesters’ principles whilst at the same time continuing to fly, drive a private vehicle, or for that matter, any one of an endless list of activities over which they anguish.

I popped down to our local estate agent this afternoon.

Bad luck, i’m afraid. All the local caves have been sold.

Even worse, the population-reduction squads are on their way to seek out those without a cave. Top-Man says that the Earth can’t sustain those who don’t live in a cave. Only those with caves are allowed to hunt and gather berries.

I salute them. We need to wake up to what we’re all doing to our beautiful planet.

They have succeeded in bringing awareness to their cause using peaceful methods.

I believe that officially they have a single item agenda of achieving a carbon neutral environment by 2025. The current target by HMG is 2050

Does this mean I have to power down my system when I go to bed now?

Does anybody believe that “carbon neutrality” (I don’t know what that means btw) can be achieved in the next 6 years?

Also, what is involved in achieving this?

What are their “main principles”? Again, just so I understand …

People need to take personal responsibility and not rely on governments.

It’s only going to get more worse or better - depending on ones moral high ground. As those born after 2001 are born into a world that has terrorism, global climate devastation, poverty, 1% super rich controllers. A government system that’s ridiculous and a real sense of no future. Punk will not save the day for generation Z.