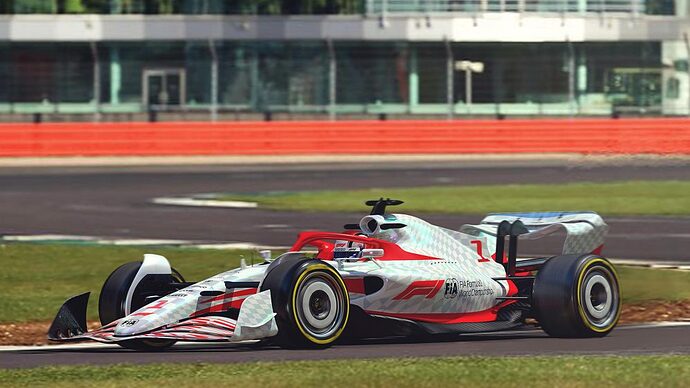 The 2022 rule changes are intended to have the cars suitable for F1’s cost cap era but also be more ‘raceable’, less prone to turbulence and able to run closely and potentially easier overtaking.

The cars will look very different, most obvious are the 18 inch wheels with low profile tyres and wheel covers. Less obvious are front & rear wing designs and other aero design items.

Cars will get a downforce from a new ground-effect floor. This is two long tunnels in place of a flat floor & barge-boards, this gives a less turbulent rear wake and the up-wash of air exiting from the floor is higher and gives it time to dissipate faster.

Front wing will be a more simple four-element attached directly to nose and transitioning into a simplified single-piece end-plate.

Rear wing will be shaped with a round profile wrap-round connection between the main wing profile and the vertical supports. This removes rear wing end-plates and the strong vortices they shed.

18-inch wheels and low-profile Pirelli tyres. The intention is to be less temperature-sensitive allowing longer periods of hard racing.

Suspension must be attached directly to the wheel-hub .

Hydraulic suspension no longer permitted and only the spring/damper units can control suspension stiffness.

A standard tyre pressure sensor will be used to monitor the running conditions of tyres.

The 1.6-litre V6 turbo engine design remains unchanged. However the power units will be formally homologated at the start of the season and frozen up to the end of 2025.

That new body shape looks pretty. No doubt it will sprout bits as time passes

Hopefully the racing is great

Thanks to Mike-B for starting this. Looking forward to 2022

I think a big question mark for 2022 is how well Red Bull will do, with Honda leaving F1. As I understand it, RBR will continue making and developing the engine on their own, with some Honda engineers on board?
It reminds me of when Renault left F1 in 1998, and Mecachrome took over the building and development of their engines. It was not a success. I fear Max will have to wait for his second championship.

I saw on FB one of the numerous F1 pages write that Hamilton was considering retirement. I have no idea where they got the information and would take it with a large grain of salt!

I would be shocked if he retired.

It’s almost as if the rules are that once you add a winglet, vane, strake, tab, slot etc. to your car, it’s there for good. Crazy how complex the aero is on the 2021 cars.

We actually had very good racing this season with lots of on-track overtaking. With the much cleaner aerodynamic wakes the new cars produce, next season might be even better.

RBR will continue making and developing the engine on their own

The 2022 to 2025 engines cannot be ‘developed’, that applies to all teams.
The whole power unit & its peripheries will be formally homologated at the start of the 2022 season and the design & development frozen up to the end of 2025.
All RBR at MK are doing (as I understand it) is building & maintaining the engine stock for themselves & the other Honda engine team with parts & sub-assemblies supplied by Honda

It’s always the way. “Next year the racing will be great”

I agree that this year was good. Hopefully it will be similar next year

Correct, any development will need to have taken place this year. I think the rumour is that Ferrari is the only one with something new for 2022, with Honda, Merc & Renault just having an evolution of this year’s engine. Whatever they have at the start of 2022 will indeed remain the same until 2025.

Been a bit too quiet👍

Interesting point, I went to the Barcelona F1 when Max first won, and what surprised me were that all the Spanish fans appeared to be there for Carlos, and very little for Fernando - I was amazed

Yeah and imagine if the Ferrari engine is mighty and Bottas has just plonked himself in front of one of them!

I didn’t know it had started, who’s winning?

Yes, he seems to be a winner.

With 61 international victories in the overall, he has won more FIA rallies, and more FIA championships, than any other driver.