Mind you, after moving up to larger speakers I would never go back so I would look at floor standers around the same price.

Hope you’ve picked up that you really need a home demo before making a final decision but I appreciate this isn’t always possible.

Good luck and let us know whet you think when you hear some.

For obvious reasons it’s not possible to have demos now, under normal conditions I would absolutely dem anything.

I’ve always been fascinated with these little boxes, never heard any apart from JR149 similar voiced speaker and drivers, lovely sound as I remember back in 1978.

I’m speakerless at the moment except for a tiny pair of Q acoustics 2020, actually sounding better than they deserve to on my 250dr.

Not surprising absolutely nothing wrong with QAcoustics speakers for their price they are very good.

I don’t own this setup but have heard it in a local dealers. The dealer loved the Falcons but I wasn’t particularly keen. I thought they sounded a bit bright. Of the many speakers I auditioned my favorite small standmounts were the Proac DB1 (which I bought) followed by the Russell K Red 50. As far as floorstanders as concerned I liked the Spendor A4 and Neat SE2.

I have my 252/SC/250 driving Spendor LS3/5As. Shouldn’t be that different from the Falcons, if the Falcons adhere to the LS3/5a licensing specs. Sounds wonderful!

Speakerless means no music which is awful - how did that come about? Or do you have headphones,? In which case what model?

Speakers make such a huge difference to the sound of a system and preference is so personal that other people’s experience with LS3-5As is a bit meaningless, likewise recommendations. Personally I would not be happy with anything that curtails bass, and I like to be able to play music loud, so I would not go for small speakers like these.

They have a sound which sets it apart from todays trends and it has that special sound you only get from mini-monitors. I would happily live with a pair of LS3/5a again. The bass is o.k. unless you need the bumbling part of it. And unlike floorstanders that always connect to a room boundary they are easy on the room (lack of reflex port adds to this).

A million years ago my wife and I went shopping for speakers at a high end audio dealership. While the salesman was demonstrating speakers he stepped away to take a call but put on a Frank Sinatra record before he did. My wife and I were amazed with the sound of it. We tried to discover which of the speakers were playing among all the big expensive speakers. When the salesman came back he pointed to little shoe box sized Rogers LS3/5a’s. We bought them for the list price of $450.
36 years later I sold them for $1,000 and could have got more.
I’ve been a fan of BBC thin wall monitors ever since. After years of trying many different speakers I went back to thin wall monitors, Harbeth 30.1’s. They were the only speakers my wife ever commented on. When she heard them she turned to me and said “now that is perfect”.

The Falcons are an itch that won’t go away, but so is a big broad breathing relaxed stroke of a speakers sound the Falcons won’t have.

Anyone heard the Falcon Q7 ?

I’ve got Rogers LS3/5As and SL2s in different systems here. If I had to give one of them up, I’m not sure which I would keep, but possibly the Rogers…

Me too, they are available as a kit now, am very tempted even if only to use occasionally.

Here in the States they differentiate between the Falcon silver and gold badge LS3/5a’s. I believe the difference is in the crossover. I understand it’s worth the grand or so price difference to go for the gold.

As I understand they can be purchased assembled at a price of course.
Not that it looks difficult to get together, even for non trained techs.

As I understand the size or depth is larger than LS35 standard ?

I see Falcon are offering a build at home kit for the IMF 100, sounds interesting, a sort of LS35a with a transmission line, £1500 for the kit. Full details on their website and a few reviews online. 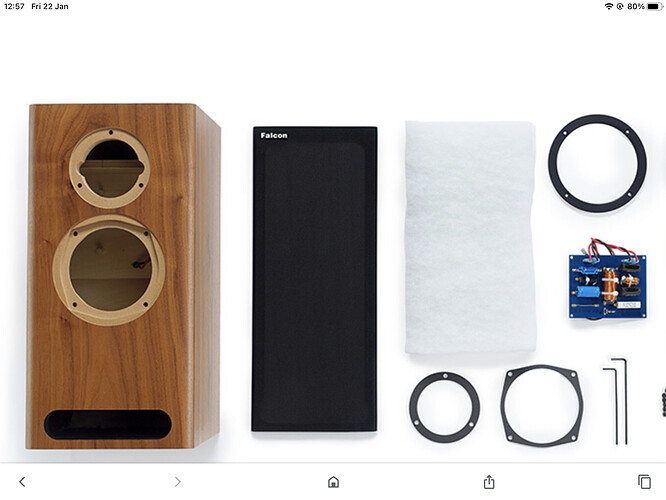 I’ve read a guy in USA ordered the Falcon 100 kit and was very pleased.

Heard some of the latest Wharfedale made out there, muffled and slow were my first thought, looks nice but guess its mostly nice outside.

I’m very curious about these Wharfdale reviews all glowing, the evo2 £5.99 super duper reviews and from well regarded reviewers.

The Falcon kits look great and and wondering if I could build the it, Q7 maybe, I wouldn’t say my soldering is competent enough.

No soldering required, check out the Falcon site for details

I was thinking more of the Q7 with silver crossovers require some soldering.