Jason Bourne of course was a name chosen with each of the first two letters of Bond’s name .

On Her Majesty’s Secret Service

Bond was enjoying a formal dinner (wearing the kilt) in the mountain top resort. A gorgeous woman sitting next to him used her lipstick to write her room number on the inside of his thigh. That was sensational to my twelve year old self

I also recall a ski chase with baddies down the mountainside. One of the baddies is diverted through a snow clearing machine, at which point the snow in its exhaust turned crimson. Bond turned to his companion and says, ‘Boy, he had guts.’

SteveO - if you never got on with Brosnan as Bond you really need to watch ‘The World is Not Enough’. It’s got perhaps the greatest opening of any Bond film with the boat chase down the Thames (and I love the fact that permission to film this was refused until Eon Productions called the Prime Minister Tony Blair and he told them to just do it!) It also has one of the very finest Bond girls to ever grace the screen in Sophie Marceau and it was made at a time when the action sequences were still feasible and not completely ridiculous thanks to CGI. Pierce was by then well established in the role and had the age and gravitas to fit the role.

Certainly FRWL and Goldfinger are my favourites and Lazenby had a good outing.

OHMSS is certainly a cut above many Bond films 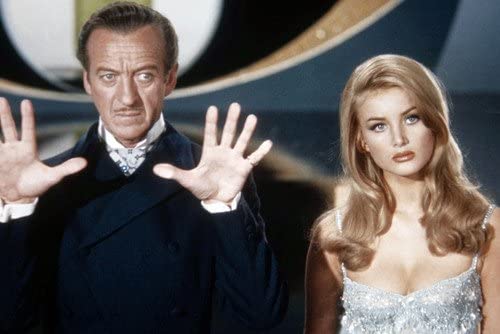 Not forgetting Barbara Bouchet. Of course.

Casino Royale; I’ve got a copy and might well give it whirl. Recently reread “The Moon’s a Balloon”, too, and I’m in the mood for something light hearted.

From Russia with Love. Wanted the attache case. Loved the scene in the Istanbul cistern.

Recently reread “The Moon’s a Balloon”

I have found this to be one of the most re-readable books, along with Bring On The Empty Horses. Only GM Fraser’s Flashman books have been re-read more times by yours truly.

And on the subject of books, and Bond, my favourite book in the series was You Only Live Twice; what’s more it’s one of my favourite Bond films.

However, I think my favourite of all has to be The Spy Who Loved Me; it has Roger at the height of his powers to raise an eyebrow, one of the best opening scene stunts, nuclear submarines getting gobbled up by giant tankers, that white Lotus Esprit, the girl in the helicopter who tried to shoot the white Lotus Esprit, Barbara Bach, the Pyramids, that fight on the rooftop in Cairo, a Ford Cortina (just like the one my Mum had), Jaws, plenty of innuendo delivered in way that only Roger knew how, and a missile launching motorbike and sidecar, which of course gives Bond one of his best lines ever - “All those feathers and he still can’t fly”. Brilliant.

That was the first Bond film I saw at the cinema as a child. I had the white Lotus, too, but it was only a toy, sadly!

The Flashman novels are so funny, immaculately researched . I do wish there had been a few more films.

Agreed, all Bond films are good, but the problem me is that I can only watch once!

I loved On Her Majesty’s Secret Service, which doesn’t usually make it in the top lists.

You only Live Twice, Thunderball, Goldfinger and The Man with the Golden Gun are also favourites.

Anyone remember a copycat version called “our man Flint”

Yes indeed James Coburn. I have the double DVD set. Our Man Flint and In Like Flint.

Also, love the Dean Martin ‘Bond films’ where he is Matt Helm.

Or going back to Roger Moore there was the saint, Simon templar

As a fan of the JB007 franchise for most of my life (I was a fan before I saw the first two films in a double show … ) I’ve spent much time discussing this question (and the associated one: who’s the best Bond?)

For me, the best JB007 film is Thunderball (1965) with On Her Majesty’s Secret Service (1969) being a close follow-up. Recent ones have paled and I think Skyfall is easily the worst.

I think OHMSS is a dark horse with many fans, crisp, well executed, Lazenby should have handled himself better off screen as he was an efficient Bond on screen

Anyone up for predicting who plays Bond next after DC ??

Shoulda been Paterson (Johnson) Joseph but probably too old now.

All right, the question should be asked “why replace him”

Is he relevant today or a tired franchise going through the motions ?